The Things We Do to Level Up

I dreamt last night my Skyrim character got a job at Costco, mainly consisting of straightening and arranging products on shelves. The manager's birthday was coming up and my character was asked to jump naked out of a giant cake for him, which I'm pretty sure is sexual harassment.

This is Brunnhilde, my Skyrim character, currently; 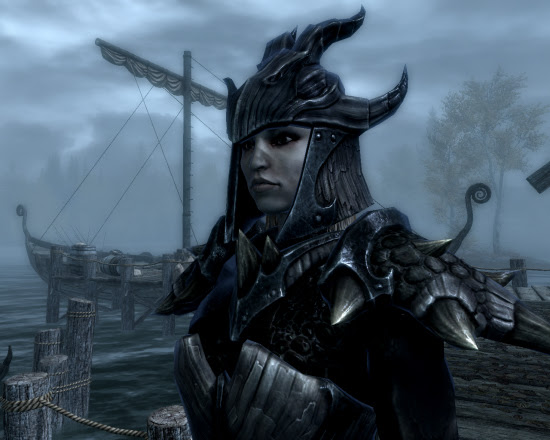 She's wearing light armour despite the fact that I've only gotten her light armour skill level to something like 50 and her heavy armour skill is at 100. This is because I've maxed out all of the skills I'd chosen for her but want to get some of the perks for her maxed out skills I wasn't able to. See, you get a perk point every time you go up in level that you can assign to any perk you choose, a special bonus added to a skill, like in the sneak skill there's a perk that makes you as silent when you're running and sneaking as you are when you're walking and sneaking. You get level ups by going up in skill level, generally by simply using those skills, but I found levelling naturally hasn't given me enough perk points for my preferred skills. One of the skills I'm levelling to poach perks is illusion, since I'd already found out with my magic using character that illusion is almost completely worthless in this game. Since it's extremely easy to level up in illusion, just by spamming the spell called "Muffle", I almost wonder if Bethesda designed illusion to be not much more than a perk point repository.

Bethesda's always trying to make new ways to make levelling more organic, and players like me are always trying to find ways to get more power from the mechanism. The temptation to circumvent the system in Oblivion was pretty powerful, as you only got level ups from raising your class skills but you could still increase your skill in non-class skills. Which means you could quickly get to a point where you outmatch all the enemies that only keep pace with your actual level. Conversely, if you stick to the beaten path and only level your class skills, its possible to level up by only levelling skills that are generally useless in combat, such as alchemy, which turns you into an easy target for your average enemy.

Skyrim attempts to fix this by eliminating classes entirely, which in some ways works well, particularly since a mage class would be a joke, but it also leaves me feeling like my characters don't start with as much of an identity. Then again, that puts more pressure on the player's creativity, which isn't necessarily a good thing since Skyrim's story and dialogue are so badly written. What would be nice, I think, is a version of Daggerfall with Skyrim's graphics. The whole open-ended thing is Bethesda's strong suit, but the open-endedness has grown steadily less in each game.
Posted by Setsuled at 5:30 PM
Email ThisBlogThis!Share to TwitterShare to FacebookShare to Pinterest