The Best Time to Find Hair in Your Custard 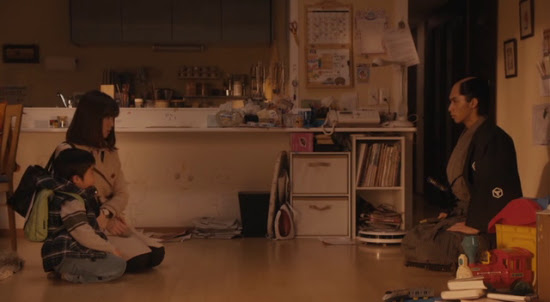 I kind of love how demographics work in Japanese media. Just a little exposure to examples of shonen, shojo, seinen and josei reveals the Western concept of the "male gaze" as neurotic bullshit. It's not a sinister subconscious plot to keep one sex down, it's just unabashedly catering to demographics. Of course, a movie is better when it doesn't do that, but we all like junk food now and then. I saw an example unexpectedly last night, ちょんまげぷりん (Chyonmage Purin), a 2010 film based on a josei (for women) manga. It's a sweet film, an indulgence especially for an independent female viewer.

My Japanese teacher was out sick last night and she left Chyonmage Purin with the substitute teacher to show us. I need to write a summary of the film in English for class. I think the idea was for us to watch the movie without subtitles to see if we could pick up enough of what people were saying to write the gist of what was happening, but unfortunately several of my classmates coerced the substitute into turning the subtitles on. Though I think I could have come up with an accurate enough summary if the subtitles were off and the sound was muted--it's not a terribly complicated movie. It concerns a single mother played by pop idol Rie Tomosaka who has an office job she has to juggle with caring for her young, around five year old son. One night, they come across a young samurai who has been transported in time from the Edo period by a Buddha statue. 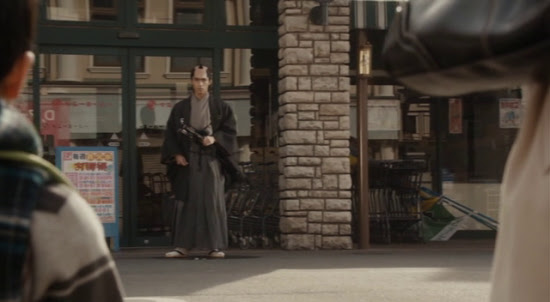 The setup here is not unlike James Mangold's Kate & Leopold but Chyonmage Purin is less of a science fiction film, which is saying something. The samurai character is barely a character at all, lacking a fundamental personality, his behaviour is dictated almost entirely by what would be the most attractive or funny thing for him to do at any given moment. When Tomosaka's kid throws a tantrum at a fast food restaurant, the samurai yells at him and tells him of a child's duty to respect his elders. When the kid is sick later, the samurai giggles in innocent pleasure when the kid likes the custard he makes for him. When he takes over domestic duties for Tomosaka, we see him having already studied the minutia of grocery shopping, fine tuning a trip to the supermarket to a science, but a scene later he draws his sword on the phone when it rings. Those who've seen Seven Samurai know what a dramatic step it was for a samurai to cut his hair, but in Chyonmage Purin the samurai cuts his hair for a more modern look without complaint. 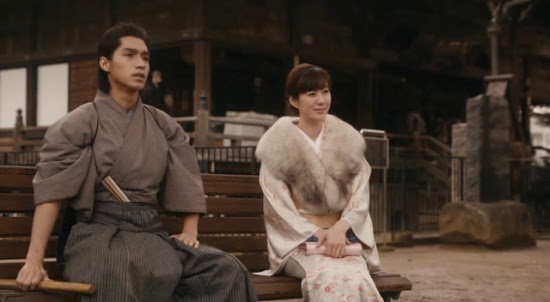 "Chyonmage" is the distinctive top knotted hairstyle initially worn by the samurai and "purin" is custard. It's a more appropriate title than the one western distributors gave the film, A Boy and His Samurai. This latter title would suggest the story follows the kid and the samurai but the movie's more about Tomosaka's character and how she perceives and manages the two boys. The main point of conflict comes when the samurai, having won a televised cooking contest, embarks on a career as a chef and asks Tomosaka to quit her job to take care of the household while he works. This was exactly why Tomosaka had left her husband, so she kicks out the samurai, who had initially seemed like a more sensitive and adaptable man than her ex. I'm not sure how much irony was actually intended by having a feudal warrior display more openness to progressive ideas than a modern man. The impression I had was more that the samurai in this movie was meant to be old fashioned only insofar as old fashioned behaviour suited the idealised fantasy. You can probably guess how this one point of conflict is eventually resolved. 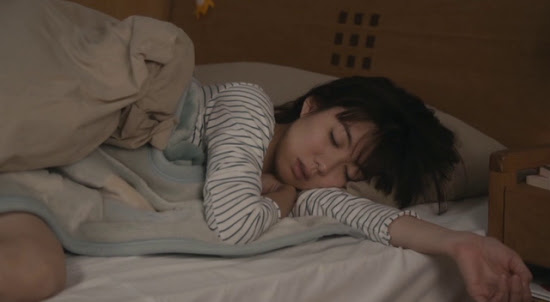 My favourite aspect of the film was Tomosaka's performance--she gives by far the most complex performance, her range of emotions keeping us anchored to her POV while the other characters behave more broadly. Chyonmage Purin is a nice little cup of custard, and all right so long as you don't take it as a full course meal.

Posted by Setsuled at 6:55 PM
Email ThisBlogThis!Share to TwitterShare to FacebookShare to Pinterest