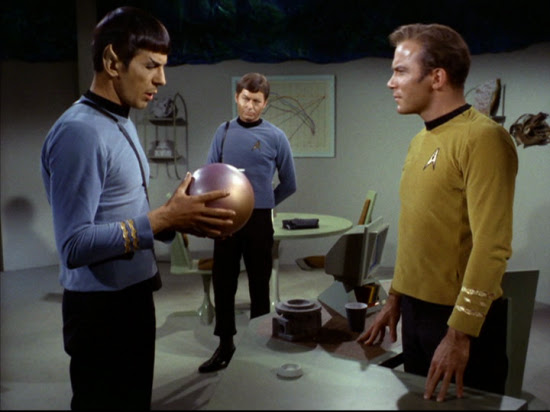 After two days of insufficient sleep, I'm really beginning to feel it. What did I dream about last night? Definitely something. I can't quite remember. There was a neon wire frame moth, something about a downward curving blue hallway . . . Nope, can't remember.

I'm nearly finished with the first season of Star Trek, having watched "The Devil in the Dark" last night, William Shatner's favourite episode. It's about a blob of sentient silicone who lays spherical eggs. 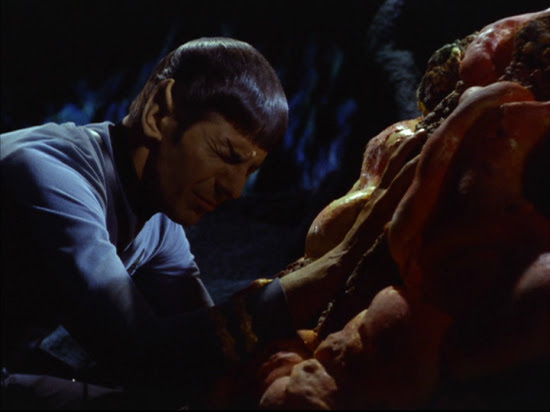 Spock melds with rock and they become Spock Rock. No, they don't actually call it that. But perhaps they should have. I don't know. I haven't had enough sleep to call it.

The rock was actually the only female character in the episode, which was somewhat disappointing, even if she was naked. Oof, I'm corny when I'm tired. Deal with it!

I heard somewhere that the makers of Doctor Who tend not to give much thought to canonical consistency while of course that's a hallmark of Star Trek--when something in an old episode doesn't fit with later canon, elaborate justifications are concocted to make it fit. And yet it's Star Trek, not Doctor Who, that tends to rely every episode so far on the characters doing at least one thing that doesn't make any sense. Like the miners in this episode who turn into a torch and pitchfork mob as soon as we learn the blob might not be evil. At the beginning of the episode, the blob had been impervious to phasers and would kill miners instantly. At the end, we're meant to think the blob is threatened by five miners wielding pipes and wrenches.

But I have to love the episode for doing something fundamental to Star Trek's charm--the Enterprise crew encounters alien life that seems hostile, and the story involves the value of establishing communication with it and the resolution is that peace has been attained without one side being obliterated or beaten. We could do with more stories like that nowadays, especially in Star Trek, not just for the sake of showing peace to be a good and sometimes accomplishable plan, but for variety's sake.

The first part is a point about Rush Limbaugh I've been meaning to express as well. A lot of people, a few of them friends of mine, seem to be caught up in a campaign to get Limbaugh off the air. This has seemed like rather the wrong tact to me. As I said when the scandal about Limbaugh's comments regarding Fluke broke, I'd rather this turn into a dialogue about why what Limbaugh said was hypocritical and sexist than anything else. Getting him off the air might not literally be censorship, but silencing voices for being obnoxious and wrong is certainly in the spirit of censorship. And the problem with doing that is that when ideas aren't expressed in the light of day, they go underground and fester.
Posted by Setsuled at 5:15 PM
Email ThisBlogThis!Share to TwitterShare to FacebookShare to Pinterest