I dreamt last night I went to a restaurant located at the other end of a huge bridge, like the San Francisco Bay Bridge, but the only thing at the other end of it was the restaurant. There was no parking even, so everyone left their cars on the bridge. There was no-one around yet, though it was sunset, and I decided to leave my car near the centre of the bridge and take a long walk to the restaurant. After I'd eaten, I came out to find the bridge crowded not only with other cars but with market stands. What's more, as I wandered up and down the bridge, I couldn't find my car and finally realised it was stolen. I went into the city searching for it, and somehow my search led me to a little shop that sold magical, antique novelty items--one thing I remembered seeing on a shelf was a bleeding hand. Behind the counter was Christopher Benjamin as Mister Jago, which, together with the bleeding hand, tips me off my dream was influenced by having watching the first episode of The Talons of Weng-Chiang before bed last night. I suspected that in addition to selling dangerous magical items, Jago was also running a chop shop where my car was currently being stripped for parts, but I had no way of proving it.

I also watched Star Trek last night--"A Taste of Armageddon". So what does Armageddon taste like? I like to think haggis, if only because the episode contains this immortal line;

The episode also features satisfying instances of Spock being a stone cold badass. Twice he just walks up to guards and gives them the neck pinch. Later in the episode, he's seen strolling down a corridor flanked by disguised Enterprise security officers like Darth Vader. 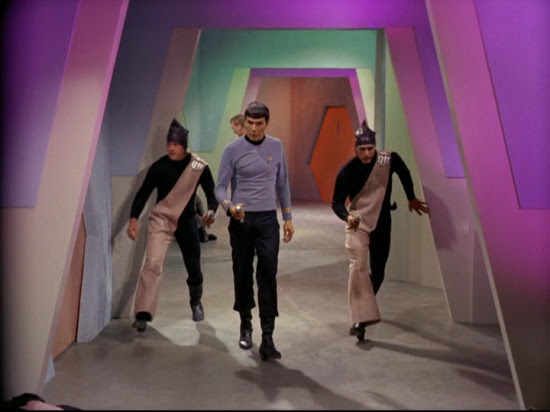 The episode also features two hot dames. A blonde wearing little more than a length of cloth precariously balanced on her shoulder and Kirk's latest handmaiden yeoman, an adorable little Asian named Tamura. Though maybe she was Spock's girl. At one point the landing party takes defensive positions in a corridor and she can be seen hiding her face behind Spock. 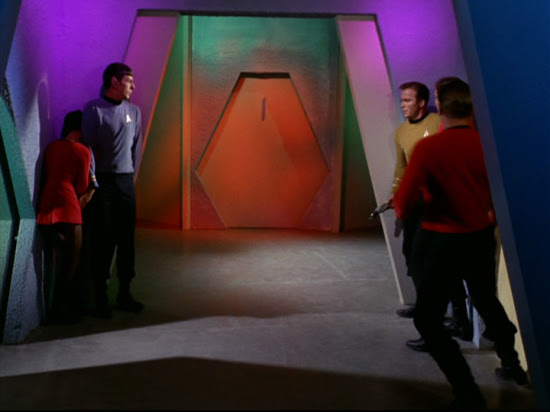 She's like a baby reasoning that if she can't see them, they can't see her, and anyway they wouldn't get past the wall of Vulcan stud she's got there.

At one point Spock leaves Tamura to guard the blonde. He instructs her;

"You stay here and prevent this young lady from immolating herself. Knock her down and sit on her if necessary." 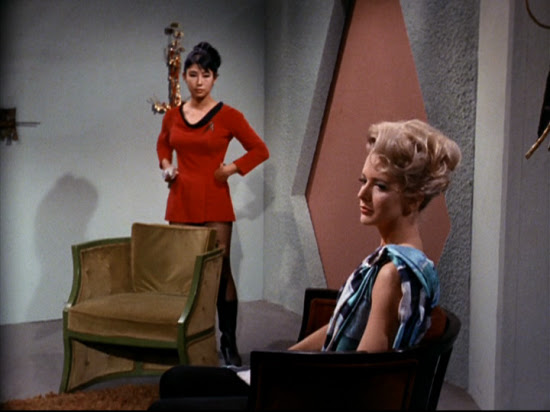