Last night I dreamt I was trapped in a theatre with maybe twenty or thirty people and we all turned into werewolves. Skyrim werewolves, I think--I distinctly remember seeing the first person clawed hands. Everyone panicked and started trying to get out of the theatre or killing one another--I was one of the ones trying to escape but I was thwarted by distinctly video game barriers, like doors that turned out to be textures and invisible bounding boxes around the stair railing.

Bright red-orange lava started to pour up from the stage. I heard Phil LaMarr's voice from somewhere say something like, "Now wait a minute." I think it was he who suggested I run up onstage, which I did. I put my face into the lava and it burned off.

Seems an appropriate enough dream for the Halloween season. I'll be watching as many horror movies as I can leading up to the thirty-first--I asked for recommendations and received enough to keep me until past Christmas so I can afford to be a little choosy. 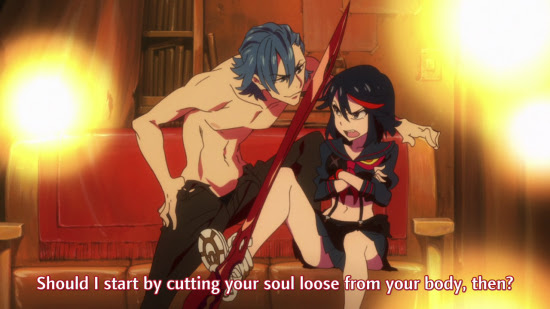 And of course I'll be watching Kill la Kill. Yesterday's new episode I felt jumped the gun a bit with its confrontation between Ryuko and Satsuki. It had some of the over-the-top ultra powerful conflict that diluted Gurren Lagann. But I loved Satsuki's recollection of her father saying her special uniform would one day be her wedding dress. This is an interesting juxtaposition with Ryuko asking why her own uniform, designed by her father, was so skimpy and being told in reply that it was "her father's taste". There's a resemblance to Evangelion here in cold, distant fathers controlling the lives of the young protagonists in disturbing and yet useful ways. Useful for ultra-violent conflict, anyway. 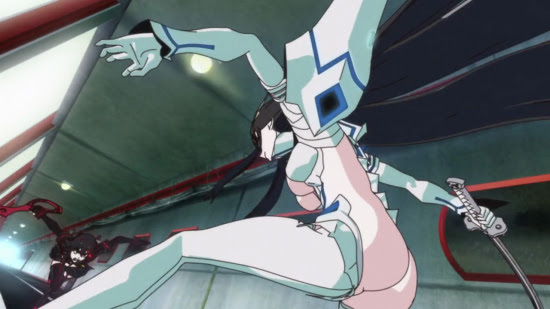 The emphasis on Ryuko's unique uniform being a reflection of her as a misfit and the antagonist being student council president are both things that remind me of Revolutionary Girl Utena. Though obviously Kill la Kill gives a far more intense focus to the uniform--I love the sequences of the clothing drawing blood from Ryuko and Satsuki. 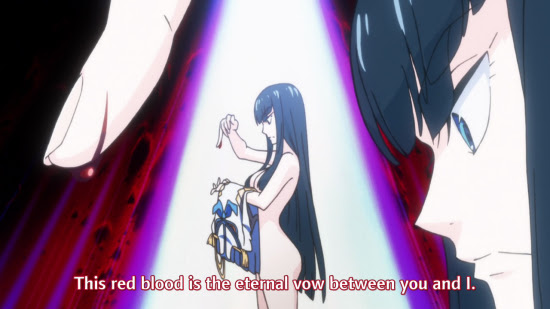