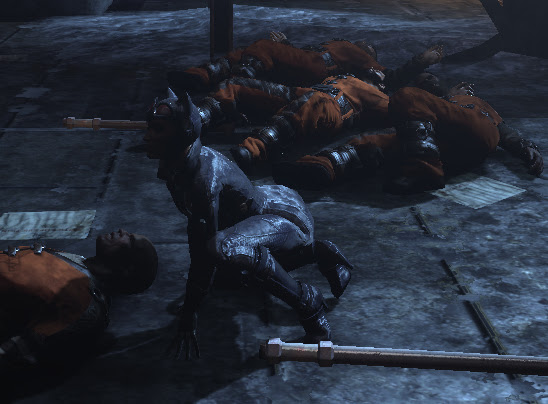 So I was finally able to play as Catwoman in Arkham City. This is the only screenshot that saved for some reason but it's in-game--right after I beat up all those guys. Which is pretty satisfying. It's also nice using a character whose shoulders and cape don't obscure a third of the screen in third person mode. For some reason you can't zoom out very far in this game. Or if you can, I haven't figured it out.

Don't get me wrong, it is fun to play as Batman. The really immersive mechanics for him from the previous game are transplanted to this sandbox world, a walled off part of Gotham City called Arkham City (not to be confused with the city from H.P. Lovecraft's writings after which the original asylum was named). It's a super prison for the criminally insane, which doesn't seem like the best idea however many helicopters and security cameras are around monitoring things. People who can't be relied on to take care of themselves left in unsanitary conditions, hundreds of impossible to monitor zones of crumbling infrastructure. It is a massive scandal, if you ask me. It does make for a good game, though.

There's a quest where a serial killer calls Batman from a pay phone threatening to kill a hostage if Batman doesn't answer another ringing pay phone somewhere else in the city within two minutes. This is a subquest you have while doing other quests, which means at any moment you might find you need to get across the whole city, fast. Which is a fun challenge--switching between running, gliding, and grappling. Batman can make pretty good time.

Catwoman uses her whip in place of Batman's grapple, which isn't as long, so you have to scamper up buildings part way. But unlike Batman, she's able to crawl upside down on ceilings. With her greater agility and conveniently smaller size she's effectively the Grant Danasty of this game. Which makes it unfortunate that, instead of being able to switch to her at any time, you only get to play as her at specific points in the plot. So far there've only been two of those for me. At least it's not forcing me to play as Robin, so far.