Learning to Smile as You Kill 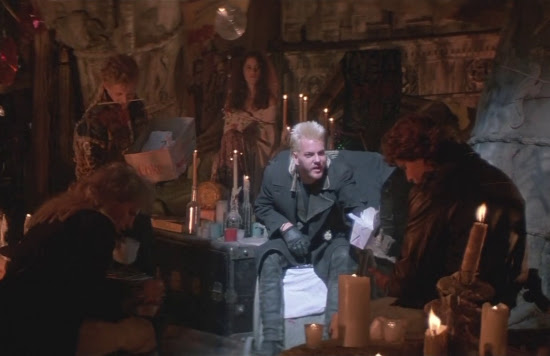 Vampire cliques are just the worst. At least that's the idea in 1987's The Lost Boys in which a scowling Corey Feldman and a smirking Corey Haim use their imaginations to rescue a Jim Morrison-ish Jason Patric from the bullshit of adolescence. It's a charming film that allows its characters to mostly not be stupid.

It's a very 80s film, not just for the soundtrack which includes a number of nice, distinctly 80s tunes but for the plot which is sort of like The Breakfast Club being rescued by the kids from E.T. Sam (Haim) and Michael (Patric) are brothers who've moved to a small town with their recently divorced mother. They don't know yet that the town is ruled by a gang of teenage vampires.

The vampires represent the frightening potential threats against the brothers' budding masculinity. Edward Herrmann plays Max, their mother's new boss at the video store who threatens to become the boys' new father which means he might be the head vampire.

Michael's the first one to encounter the vampires directly when he falls for a girl, Star (Jami Gertz), who is already half vampire (or, as a teenager, half adult). They meet at a concert for a band with an oddly muscular lead singer.

She agrees to take a trip with Michael on his motorcycle but then the vampire David (Keifer Sutherland), leader of the gang, shows up with his better motorcycle and Star sheepishly goes back to his seat.

Michael's then put through a series of initiation rituals to see if he's worthy of becoming one of them. Meanwhile, Sam meets Edgar and Alan Frog (Corey Feldman and Jamison Newlander) at a comic book store. They have an understated pissing contest over their knowledge of comic books and we learn the Frogs see themselves as the ones responsible for guarding the town against vampires. In other words, the kids are the ones who can still dream and therefore ward off the evils of growing up.

The movie has a lot of cute moments like when the kids use squirt guns filled with holy water against the vampires and Sam, discovering Michael's becoming a vampire, rebukes the older boy with, "Wait 'til Mom finds out!"

And the film has a decent aesthetic, not falling into the infamous, decadent camp of Schumacher's Batman films, finding instead a good balance between artificial lighting and realism.

Posted by Setsuled at 3:20 PM
Email ThisBlogThis!Share to TwitterShare to FacebookShare to Pinterest