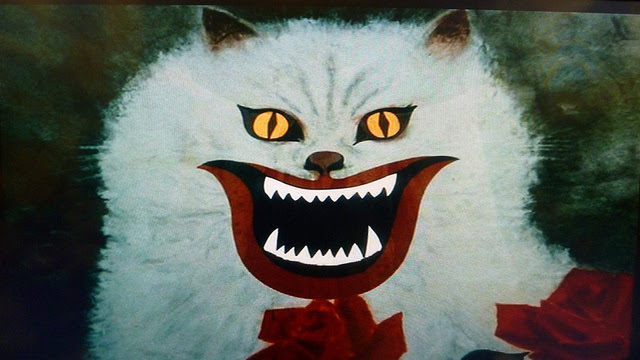 Halloween seems like a good time to talk about cats. They cover the spectrum in Japan so I'll talk about a Japanese white cat and a Japanese black cat.

1977's House is about a white cat named Shiro, which means "white" though subtitles of the copy I watched called her "Snowy". Wikipedia refers to her as "Blanche" which is a little better but not quite the same as calling a cat by its colour in the common tongue. This is a very strange, very effective film. It's very post-modern but I like it anyway.

It's about a haunted house and maybe it'd be accurate to call it a haunted movie. Much of what it conveys is dependent upon the delusions of the viewer who seems to be the ghost. That is, a woman whose fiancé died in World War II and now her spirit inhabits the old house motivated by bitterness harboured for all pretty, marriageable women, including, or most especially, her niece.

Wikipedia translates the niece's name as "Gorgeous", the copy I viewed called her "Angel," but her name is actually Oshare (オシャレ-). Google translates the word as "Fashion"--it's not a word I'm familiar with so I'm not sure whether Gorgeous or Angel is the more appropriate substitute.

She and her friends at school all have names reflecting their very broad, cartoonish personalities--there's Mac, whose name is short for the English word "stomach" because she likes to eat, there's Sweet, who's sweet, Kung Fu, who's a martial arts expert, and Melody, who plays piano. Oshare's best friend is Fanta, short for the English word "Fantasy", who's a bit of an extreme daydreamer. The movie begins with them giggling and hugging and skipping together.

The broadness of the characters and their relationships is a little shrill and one has the impression that this is more the spirit's conception of these people. Shiro, the cat, is the spirit's familiar and shows up on Oshare's mailbox when she receives a letter from her aunt. This is in response to her own letter, asking the aunt she hasn't seen since she was a child if she and her school friends can spend their vacation at her home.

Oshare's in a snit over her father's new girlfriend, a beautiful woman who's often shown with a wind effect and a billowing scarf. Again, a distinctly stylised portrayal and we sense the spirit hates both Oshare and the potential step mother equally--they are both, after all, eligible young women.

Shiro mysteriously follows the girls to the house where each girl is killed off one at a time, each death more bizarre than the last. Wikipedia says the filmmakers got several of their ideas from a child and there is a certain child logic to the broad humour portrayed for horror, like when Sweet is killed by several futons falling off a shelf.

But there's definitely an adult sensibility at play as well, as when one of the girls tries to take a picture of the aunt and her camera seems to be thrown to the ground by an invisible hand. Among all the groans and whines of disappointment from the girls a disembodied voice ambiguously says, "Sexy." There are a lot of lingering shots of the girls' bodies and their personalities begin to suggest fetishes. One begins to wonder if the spirit's motives are quite what she thinks they are.

Nine years earlier, Kaneto Shindo made a movie about a black cat called Yabu no Naka no Kuroneko, 藪の中の黒猫, ("A Black Cat in a Bamboo Grove") or simply Kuroneko (黒猫) ("Black Cat"). This is a much more straightforward horror movie--a very nice and surprisingly political one.

Two peasant women--a beautiful young woman and her attractive mother-in-law--are raped and murdered by a group of rampaging samurai. They had a pet black cat who decides to resurrect them as instruments of revenge against all samurai. They begin to lure unsuspecting samurai to a large, ghostly home in the guise of two wealthy women. Sometimes they seem to have black fur and move as cats. The evening always ends with the younger woman taking the samurai to bed and drinking every last drop of blood in his body.

Meanwhile, the husband of the younger woman, who was conscripted forcibly early on in the war, has brought back the head of an enemy general and thereby won the title of samurai and a high status from his lord. Soon, the lord charges the young man with investigating the murders of samurai and executing whoever or whatever's responsible.

The movie ends up being an interesting platform for discussing the difference between aristocracy and the lower class and seems to condemn nobility as inevitably seeing peasants as expendable. In one fascinating speech of all too insightful hypocrisy, the lordexplains to the young samurai that they have this right because they are the ones who protect the peasants.

Posted by Setsuled at 12:28 PM
Email ThisBlogThis!Share to TwitterShare to FacebookShare to Pinterest