Most of to-day has been wasted on a single math problem. I almost broke my mind staring at this thing, this area of a quadrilateral inside three triangles with the lengths of only three sides given. Please, gods, turn the math off, I don't want anymore.

A couple nights ago, I installed Batman: Arkham City, which I bought on Steam when it was on sale for eight dollars. 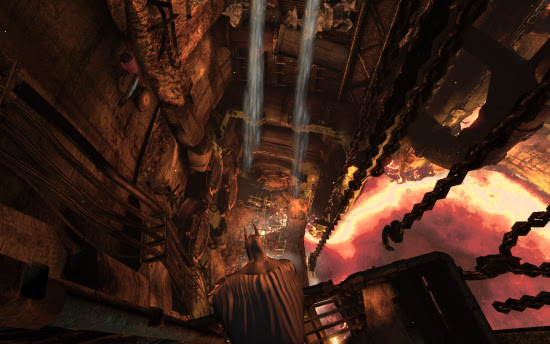 I'd been jonsing for some real, satisfyingly kinetic video gaming and I remembered how Arkham Asylum had been such a brilliant combination of fluid combat, story, and atmosphere. I was excited, too, about being able to play as Catwoman in this one though, sadly, it's mostly still forcing me to use Batman at this point.

I've still been playing The Secret World which has some really nice storytelling in terms of writing and atmosphere. This is my character, Alicia "Knep" Bergman; 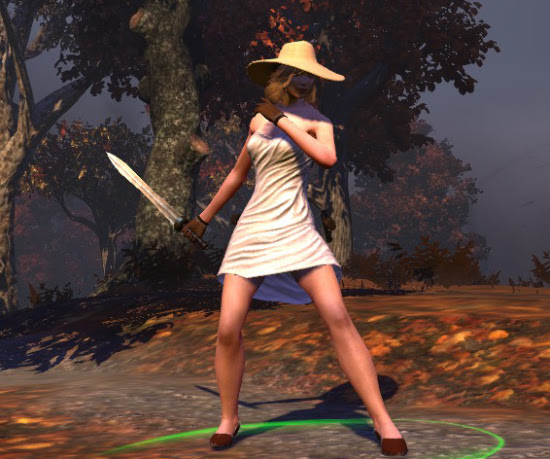 But the mechanics of MMORPG gameplay I can only take so long. A good example being a series of quests I just completed in a place called the Franklin Mansion, an ancient home in the middle of zombie and mutant infested Maine. In the quests, you touch a mirror in the attic which sends you to different points in the mansion's history. In one, in the late Victorian era I think, you try to find a little boy among a number of copies of him which turn into shadowy "child's nightmares" when you get too close. In another, you face a number of dead hippies and a Charles Manson type in the aftermath of a Sharon Tate style massacre.

Speaking of The Shining, there's a poorly considered essay at Salon by Laura Miller about the differences between King's novel and Stanley Kubrick's adaptation. She spends about a third of the article talking about how Kubrick "fanboys" assert the superiority of the film over the book without substantiating their arguments. This leaves little room for her own argument which may be just as well since she doesn't appear to have one. I'll respond to a few bits directly;

In Kubrick’s film, Jack’s madness becomes that of an imperious auteur, convinced of his own importance, running amok and seeking to wipe out the mere human beings whose inconvenient presence muddles his vision.

Yet in fact Jack is creatively blocked, as evidenced by the famous "All work and no play makes Jack a dull boy" printed over and over on his supposed manuscript. Jack isn't an auteur--his impulse to destroy his family comes from misplaced resentment. He wants to get away from distractions, he increasingly blames Danny and Wendy for getting in his way. With no other object for him to blame his own failures on, they become the focus of all his impotent rage. He can't create, but he can destroy, so that's what he'll do.

But while everything in Kubrick’s “The Shining” — especially Nicholson’s suppressed energy — pushes eagerly toward the spectacular release of Jack’s rampage, in King’s novel the man’s disintegration is a tragedy.

Actually, both are still tragedies, if one remembers that a tragedy is a misfortune that occurs following from one's own actions. The difference is that in Kubrick's version it's easier to see what Jack finds attractive about doing the wrong thing.

But in Kubrick’s “The Shining,” the characters are largely in the grip of forces beyond their control.

This directly contradicts the premise (established in Miller's essay and commonly espoused by King) that Jack starts the movie crazy. If he's controlled by outside forces, his craziness is irrelevant.

As King sees it, Kubrick treats his characters like “insects” because the director doesn’t really consider them capable of shaping their own fates. Everything they do is subordinate to an overweening, irresistible force, which is Kubrick’s highly developed aesthetic; they are its slaves.

Miller falls prey to the very error she accuses Kubrick's defenders as being guilty of--she makes an assertion without a supporting argument. In fact, while Wendy was certainly terrified, she and Danny still managed to escape due to their own actions and decisions.