The Spark of Life 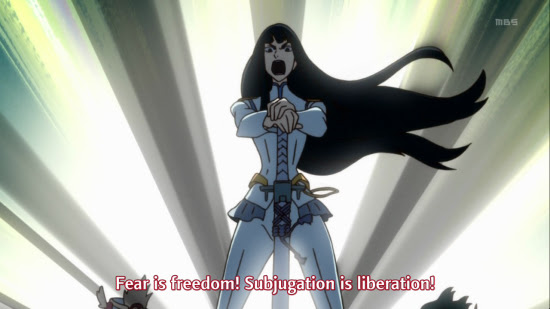 Sometimes you don't realise how hungry you are until someone gives you a potato.

Imagine you're in an auditorium growing steadily and pathetically more stale for a crowd comprised of Black Eyed Peas, Katy Perrys, Eminems and Taylor Swifts. Occasional flashes of counterfeit brain activity from a Robin Thicke or a Miley Cyrus only serve to layer melancholy twinges of awareness over the mediocrity. Critical discussions provide a vapid mirror as hockey pucks of concepts are arbitrarily labelled as substance and are knocked about the ice rink. People talk like there's something more complex going on than cars honking at sheep. It's just enough awareness to bring the thought that once there was something more, something real, and maybe just around the corner you'll find something real again. Then cynicism brings you down again as you try to swim in the stale marshmallow like the rest of them.

Then Jimi Hendrix walks into the room and starts to play. And the whole trite room tears and falls away like a stripper's top.

That's the experience I had on Saturday night when I watched the first two episodes of the new anime series Kill la Kill. 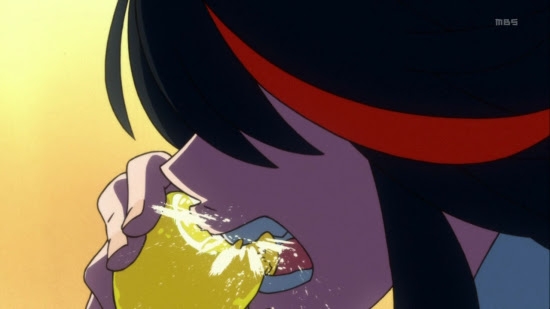 I think the above scenario gives you some idea of the awesomely pathetic state of anime to-day. An artform that once gained worldwide attention for its vivid realisations of fantasies, wildly inventive visual designs and captivating animation has become little more than a series of screensavers, aquariums of consummately lazy misogynist constructs, often ironically called "slice of life", manifested in clones of the same three or four squealing, dumb, subservient girls. 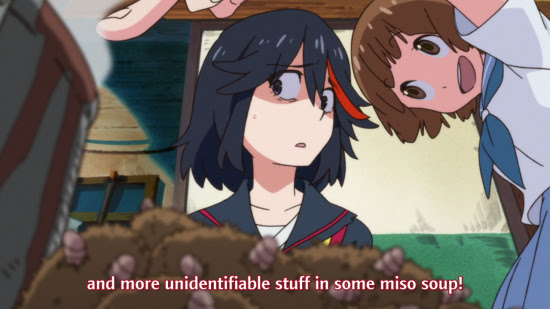 The protagonist is Ryuko Matoi who wears a demonic version of the school uniforms. It provides her with power in exchange for a steady supply of her blood and bares a lot of skin. 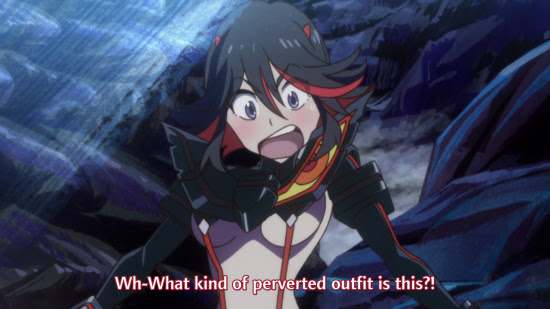 The kind I dearly hope to see girls wearing at next year's Comic Con.

If the style here seems familiar--and, gods, a signature artistic style is another rarity in anime--it's because it's directed by Hiroyuki Imaishi, the director of the last actually interesting anime series, Panty and Stocking with Garter Belt. That was with GAINAX and Imaishi had been with the studio as far back as when he was a key animator for Neon Genesis Evangelion. Now he's started his own studio, Trigger, much like Evangelion's director Hideaki Anno and FLCL's director Kazuya Tsurumaki who also left GAINAX and founded a new studio. There must have been a real shake-up at GAINAX behind the scenes, which would explain why the second season of Medaka Box sucked ass.

In his announcement about leaving GAINAX and producing new Evangelion movies, Hideaki Anno listed his motives:

It seems Imaishi's on the same mission. It's been a long time since I looked forward to seeing a new episode of an anime series the way I'm looking forward to Thursday's new Kill la Kill.

Posted by Setsuled at 1:48 PM
Email ThisBlogThis!Share to TwitterShare to FacebookShare to Pinterest