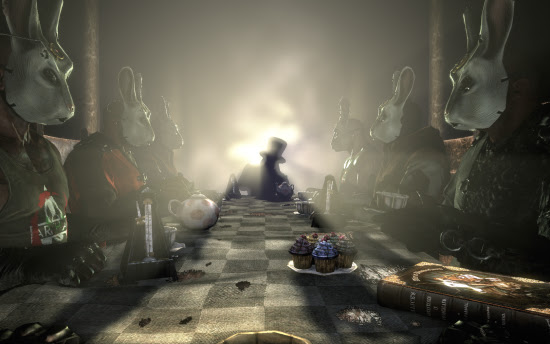 I think at some level I'm always going to like an Alice in Wonderland reference. Like last night when, playing Arkham City, I discovered the Mad Hatter is apparently part of Batman's rogue's gallery and appears in this side quest where you fight him in a hallucination. Well, you fight an endless number of Arkham inmates in rabbit masks on a big watch. 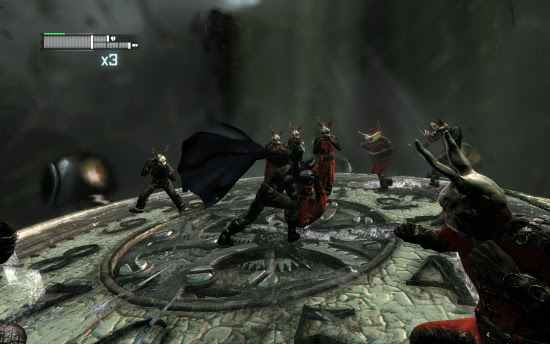 It was a challenge and mildly amusing, though I have to say the Hatter seems somewhat redundant and indistinct as a Batman villain.

This was a very short side quest. The main quest, and much of the gameplay, I'm finding to be tremendously inferior to the writing in Arkham Asylum. The previous game, while not Tolstoy, was still a nice little story about Batman suddenly having to deal with Joker taking over the place. It was paced well as Joker took over security systems one after another and took people hostage.

This game's writing sucks in a rather Jeph Loeb-ish way. There's a plot about how Joker's infected with a deadly disease which he gives to Batman (after capturing Batman rather easily and then deciding not to take his mask off). This is to give Batman incentive to find the cure. As extra incentive, Joker has also somehow infected half of Gotham city. So then there's an unlikely plot about how Batman has to team up with Mister Freeze to find the cure, which doesn't prevent a boss fight with Mister Freeze even after you rescue him. Or fights with Joker's henchmen, for that matter, despite the fact you're supposedly doing the Joker's bidding.

Then there's an extremely stilted, video game-ish sequence with Ra's al Ghul who wants Batman to kill him to take over al Ghul's society of assassins for justice. Batman refuses to kill so . . . you're supposed to fight al Ghul. This rather pushes the concept of Batman's always non-lethal knockouts to the extreme, especially since al Ghul turns into a giant sand statue of himself with a barrier of clones of himself swirling around with one gap you need to aim your electricity disruptor gun through for some reason with just the right timing. The only reason you know this is because the game tells you, there's absolutely no way you'd figure it out on your own.

There's a lot of that, including the quest I completed last night where I died trying to get across a pool of water before the hints it gives you after you die explained to me I had to use Mister Freeze's freeze ray on the water to make a raft of ice. Obviously.

Another problem I had last night was Avast Anti-virus had suddenly, for no apparent reason, decided the exe file to start the game was malware and moved it to a chest. I'll say this for Avast--when it thinks a file is dangerous it makes it really hard for you to use it. Which I guess means it's doing its job. First I had to move the file out of Avast's virus chest and then disable Avast's "shields" for ten minutes. Maybe the fight against Ra's al Ghul wasn't so unrealistic after all.