All Time at Once 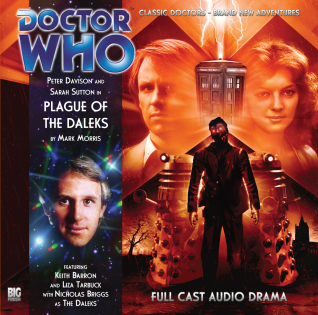 In the last three months of 2009, Big Finish released a series of three Doctor Who audios featuring the Fifth Doctor and his companion Nyssa trapped in the village of Stockbridge. I'm not sure if it's meant to be any of the real Stockbridges but all three stories are pretty good, particularly the middle story, The Eternal Summer. Though the first story, Castle of Fear, wins points for having the Doctor mentioning he'd like to meet Percy Shelley, perhaps to make up for the unflattering portrayal of him in The Company of Friends.

The three Stockbridge stories correspond with the past, present, and future of the village. Castle of Fear has the Doctor (Peter Davison) and Nyssa (Sarah Sutton) witnessing a mummers' play in 19th century Stockbridge and noticing that, alongside St. George and the Dragon, there's also a character called the Doctor who travels in a blue box. So the Doctor and Nyssa must travel to the twelfth century to inspire the events in the play. There's a definite attempt to capture some of the atmosphere of Monty Python and even an oblique nod to Monty Python and the Holy Grail when one character is reminded of her mother when she smells elderberries. The story features the Rutans, the species introduced in the Fourth Doctor television story The Horror of Fang Rock. Voiced by Nicholas Briggs, though, they sound a bit too much like Daleks.

The Eternal Summer is more focused on the logic of time travel though it's also very funny. Written by Jonathan Morris, who seems to excel at cleverly constructed time travel plots--the best example of which is Flip-Flop--The Eternal Summer takes the Groundhog Day premise (and specifically mentions the film) and puts it on steroids. The Doctor and Nyssa find themselves in a Stockbridge that repeats the same day over and over, all the residents remember the repetitions but still react emotionally to events in the day as if they're new, and anachronistic objects turn up all over town making it difficult for the Doctor to determine the actual date. Events layer over each other and other events happen in impossible sequence, like a man who dies grieving for her his dead wife who tells the Doctor about going to his funeral, or another man asking the Doctor if he's planning on going to the wedding/May Day/Christmas celebrations, the audio layering all these events over each other. The story also features an entertaining UFO nut played by Mark Williams (who would go on to play Rory Williams' father on the television series) who's the only one in town immune to the mental conditioning of the other residents.

The final story of the series, the "future" story, is Plague of the Daleks which mixes Daleks with zombies in a Stockbridge that's been turned into a sort of museum. Not as good as the first two, it's still pretty entertaining though zombies don't work very well in an audio format. Their groans paint a pretty limited picture.

Posted by Setsuled at 7:09 PM
Email ThisBlogThis!Share to TwitterShare to FacebookShare to Pinterest