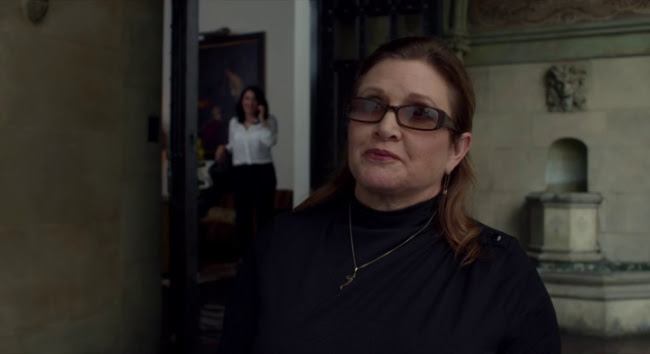 One of the great things about Carrie Fisher, who died to-day, was that she wasn't a perfect fit for the role of Princess Leia. It's this that makes the character so much more memorable than she otherwise might have been. It's clear that George Lucas, while he was patterning the film on old Hollywood adventure serials, still keen on shaking things up for 1970s progressive culture. While male characters still are the biggest movers in the original Star Wars trilogy, there was the kind of fire in Fisher's eyes that you didn't see in Deborah Kerr in King Solomon's Mines or the intergalactic housewives of space opera serials of the 30s, 40s, and 50s. Certainly it's a fire not present in Daisy Ridley's performance in The Force Awakens--Ridley's Rey comes off as someone who's had emotional support all her life and has grown up to be confident while Leia has that edge to her that makes you think she's been fighting for an impossible cause since she was a kid. Her retorts to Vader and Tarkin are delivered with wide eyes and bared teeth and she leans forward, all aggression.

No reserved, ethereal Natalie Portman or cheerful Daisy Ridley here. Felicity Jones comes a little closer but Jones gives a good performance while one senses this was the real Carrie Fisher coming through. As a product of 1970s cinema, everything in Star Wars was touched by experimentation, including the performances and casting. There's something off-putting about all three of the leads, something rough and a bit wild that simply will never come out of a studio so well oiled as Disney. One of Lucas' chief inspirations for Star Wars was Akira Kurosawa's The Hidden Fortress and the similarly fierce, challenging performance given by Misa Uehara may have influenced Lucas in casting Fisher. Both women have this quality of desperate tenacity.

It's weird that the delightful young woman who starred in Singin' in the Rain in 1952, Debbie Reynolds, has now outlived her daughter Carrie Fisher. I'm reminded of the line from Blade Runner, which Google tells me now is actually from Tao Te Ching; "The light that burns twice as bright burns half as long." Coming from Tyrell in Blade Runner, it comes off as the patronising philosophising that seeks to dim the inevitable unfairness of death and certainly there's no good reason Carrie Fisher should be dead at 60. Just coming into the spotlight again last year, many remarked on her acerbic wit. People seemed surprised but it was there all along. In her performances and interviews, the impression I always had was of someone fundamentally dissatisfied with life and who hadn't learned the trick of sedating herself out of the feeling. She was candid about her drug addiction and like many brilliant minds who use drugs the empathy we feel for them comes from the impression that their need for escape comes from a painfully accurate view of reality.

The incongruity of her being a fantasy princess strengthened the character wonderfully because instead of being merely a male ideal of feminine frailty she becomes a portrait of human frailty and defiance.