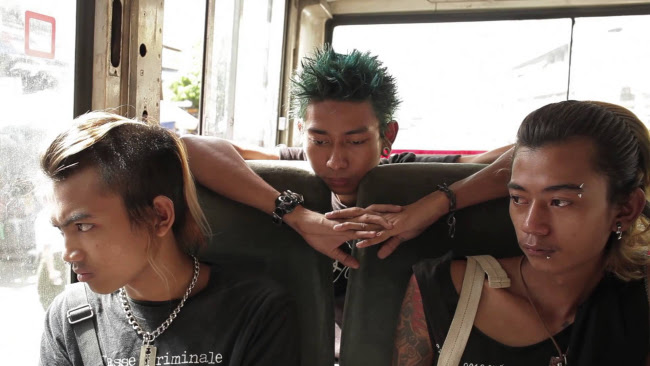 I would have thought irony was the soul of Punk. Who can listen to The Sex Pistols' "God Save the Queen" and think the band were ardent Royalists or The Clash's "Lost in the Supermarket" and believe the band was into retail therapy? But, leaving aside what calls itself Punk now in the U.S. and Britain, Punk in some countries now has become as blunt as a tonne of bricks. An example would be the Punk scene in Myanmar as depicted in the 2015 documentary My Buddha is Punk. German director Andreas Hartmann follows a Burmese Punk band and its lead singer, Kyaw Kyaw, without narration, providing only a couple title cards for the historical context. The film is a nicely raw, slice of life that gives a window into the lives of these musicians and Myanmar.

The clips of Rebel Riot's songs and shots of the band recording immediately remind the viewer of Pussy Riot, the Russian protest band obviously influencing Rebel Riot in more than just their name. Like the music of Pussy Riot from two or three years ago, the point of Rebel Riot's music is less an attempt to create a song that might be appreciated twenty years from now than to stage a protest with microphones and musical instruments. "Fuck religious rules!" goes the chorus of one Rebel Riot song. Other songs shown in the film similarly express blunt disapproval for war and conformity. But scenes of Kyaw Kyaw speaking to other bands and people in the streets demonstrate why anything subtler might not go over so well. The people of Myanmar, who have grown up with the propaganda of an oppressive dictator, are shown as unable to critically analyse to any great depths. In one scene, Kyaw Kyaw speaks to a band who call themselves The Nazis and is obliged to explain to them that the Nazis were an oppressive, fascist regime. Like the Nazi bars in Japan or Korea, there's little awareness of the philosophy behind the Nazi party in celebrating its aesthetics. Of course, Nazi paraphernalia was part of the original Punk culture of the late 70s and early 80s but as an ironic statement, skewering the human addiction to fascism. One wonders if the members of the Burmese Nazi band saw Nina Hagen's "Smack Jack" video and assumed she was endorsing the trappings of fascism.

Since an inability to critically analyse, and a deafness to irony, is manifesting more in the U.S., as has been increasingly apparent in the aftermath of the election, we may be entering a post-irony, post-post-modern era ourselves. In another year, the U.S. may have its homegrown Pussy Riot, though as Putin's role in the election is becoming more apparent, there may simply be a U.S. chapter of Pussy Riot. Though judging from how ill-informed Pussy Riot's anti-Trump video, "Make America Great Again", was--it suggests under Trump Russians will be discriminated against and deported--Pussy Riot may need to change its line-up again. "Make America Great Again" is also perhaps too ironic a title.