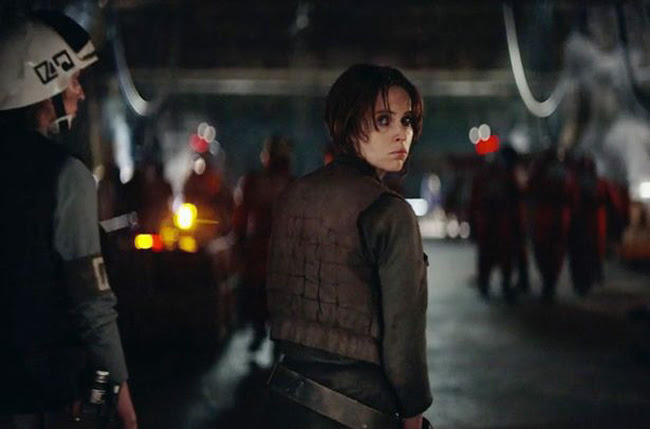 A desperate group of young misfits aim to steal the plans for the Death Star in 2016's Rogue One: A Star Wars Story, the first Star Wars film that's not part of the main saga, unless you count the theatrical release of the Clone Wars pilot (or the Ewok movies or the holiday special--you get the picture). Rogue One is quite good, accomplishing its stated mission to be more of a gritty war film than the main saga, though we're still not talking Apocalypse Now. But it's a lot closer than a lot people would expect and has cinematography second only to The Empire Strikes Back. The most fascinating aspect of the film, though, is its methods of creating characters--in some ways it achieves extraordinary success, in other ways it falls disappointingly short.

Before I get into a proper review, though, there's an issue raised by this film that will have repercussions much bigger than for the film's story or for Star Wars. Many would consider this a spoiler--Disney is treating it as such--but I frankly consider it ridiculous that it's considered a spoiler--it gives away nothing in particular about the plot, but if you're super cautious and don't want to know anything, then don't read on.

Okay, I'm referring to the fact that the film resurrects Peter Cushing with cgi to play Grand Moff Tarkin. This has been on the horizon for a while--if you've seen Ant Man or Captain America: Civil War you've seen how Disney has already made Michael Douglas and Robert Downey Jr. look like younger versions of themselves using the same technology. With Michael Douglas in particular it was extremely impressive, the effect had no flaws that I could see. But Tarkin in Rogue One has much more screen time, is more crucial to the plot, and there's no living Peter Cushing to layer the effects over. I credit it mainly to Ben Mendelsohn, who is absolutely amazing as Director Krennic, that my attention wasn't taken completely out of the story as I stared at this animated corpse looking for a soul. And it has a soul, it's named Guy Henry, an actor many people know from the Harry Potter movies, among other things. He played Tarkin and the effects artists layered the likeness of Peter Cushing over him.

When I was younger, whenever someone talked about a comedian adopting the mannerisms of a famous person in order to make a joke, this was referred to as an "impression". This sort of thing is increasingly referred to as an "impersonation" and I think this reflects that people are losing sight of the fact that what the comedian is doing is giving his or her impression, using his or herself as a canvas on which to paint their idea of someone. Just like an Impressionist painter, like Monet painting a sunset. He might paint from life but it doesn't look like a photograph because it's filtered and transformed through his emotions and ideas. Tarkin in Rogue One is an impression of Peter Cushing and like all impressions it's incomplete and its accuracy depends on the perspective of the viewer. Although Henry does a fine job capturing Cushing's accent and his tendency to roll his Rs very slightly he plays Tarkin as much more of a self-conscious villain than Cushing did. While Cushing did lean in on Carrie Fisher as he intimidated her into giving up information, and he exuded sadism, there was also a natural vulnerability to Cushing that gave his characters nuance and strangely added to the menace of the villains he played. This aspect of Cushing isn't part of Henry or the cgi artists' impression. And in a sense, that's okay. Ewan McGregor and Alec Guinness give different interpretations of Obi-Wan as a character, innumerable actors have given their interpretations of King Lear. They didn't usually wear the skins of their predecessors like an Aztec priest, though. But it isn't the eeriness that bothers me so much as the feeling many people will see a computer recreation of Peter Cushing as every bit as good as the original. It's really not him.

Onto a proper review. Some actual spoilers ahead.

I really liked the first scene, in large part because of Mendelsohn and the direction he takes the Imperial Officer type. One of Force Awakens' biggest failings was in Domhnall Gleeson's character, a broad, snarling caricature of an fascist officer. Krennic in Mendelsohn's hands is cunning and his feigning sympathy for Galen, Mads Mikkelsen's character, almost seems genuine in the kind of way where you wonder if Krennic really knows what it's like to genuinely connect with another human being. He seems like a real psychopath rather than Snidely Whiplash.

Mikkelson's great, of course, though he plays a less complex character. But he presents the sense of calm wisdom and self-possession that worked so well in Valhalla Rising. His first scene with Mendelsohn is also one of the first in a series of striking visuals. The farm he lives on with his wife and daughter are obviously meant to remind the viewer of Luke's home on Tatooine but instead of desert it's a field of tall green grass and the wind and clouds give the impression there's an approaching storm. This is clearly not a planet where you need to farm with moisture vaporators. Greig Fraser's cinematography uses a lot of shadows and dark silhouettes, not unlike Peter Suschitzky's for Empire Strikes Back, but while Rogue One's palette is more complex than most contemporary fantasy and action films, its colours are still more subdued than Suschitzky tends to make them in his films. This of course adds to the "gritty" feel.

Like Force Awakens, the central protagonist of Rogue One is a pretty English woman. But while Rey is a wide eyed, innocent country bumpkin, Jyn Orso is a real child of war. When asked if she thinks her father is still alive, she says she prefers to think of him that way--spoken just like a woman who's been forced to create mental walls to ward off true ambiguities too torturous to contemplate. Actress Felicity Jones does a good job portraying this person who is physically and mentally always under threat and whose instinctive reactions are all calculated to push away from people, ideas, and hope. I liked her more than Rey, and I liked Rey. But as with the film Rogue One itself, Jyn was clearly intended for an older audience. However, I don't quite like where the film tried to take Jyn. I sensed Disney handed down an imperative that however Jyn started out she needed to become a strong, empowering leader, and Jones doesn't quite seem to internalise this arc. She gives a speech to some soldiers that I think was meant to be inspiring but I think any real soldier would be unnerved by how his or her commander seemed to be on the verge of a nervous breakdown. The problem here, for me, is not Jones but the fact that she was forced into this arc at all. I don't think it was necessary and I suspect her speeches were among the notorious reshoots.

Diego Luna as Cassian Andor, though, was generally just a wet blanket. He's intensely bland though his character's struggle with the dirty things he's had to do as an agent of the Rebel Alliance was great fodder for some of the film's more impressive dialogues. The film dares just enough to give the viewer the impression of what an existentially frightening thing it is to be a rebel, the feeling that you're never really sure if you're doing the right thing, to assert your little self as legitimate in opposition to a powerful government, but you have to completely commit in order to get anywhere. As such, Forest Whitaker presents a far more interesting character with Saw Gerrera, a Rebel soldier who has crossed the line, according to the Rebel leadership. Whitaker does the right thing and plays Saw as slightly mad, a man who has completely lost his sense of footing. I credit Whitaker for making me see the character who originated in Clone Wars as he might be much further down the road.

Donnie Yen is a great standout as a blind martial artist. Thematically he works as a counterpoint to the more conflicted characters in that he has complete faith in the Force. He's also very funny and his fight choreography is absolutely brilliant.

The most impressive fight scene, or I should say slaughter, though, belongs to Darth Vader. And I would like to thank everyone involved with making Vader truly frightening again at the end of the film. Gone was the Vader on cereal boxes and key chains and here again was this creepy, implacable masked killing machine. At the same time, his conversation with Krennic showed him to be someone with a philosophy, one of the most interesting things about the prequels. He's not exactly a psychopath like Krennic seems to be, he's a man who thinks he can use his anger to a better end.

I feel like I could say a lot more. Alan Tudyk was great, Riz Ahmed was perfect. The locations were great and far more memorable than any in Force Awakens. In general, it's a better film.

Posted by Setsuled at 7:45 PM
Email ThisBlogThis!Share to TwitterShare to FacebookShare to Pinterest