Fictions of Oil and Highlands 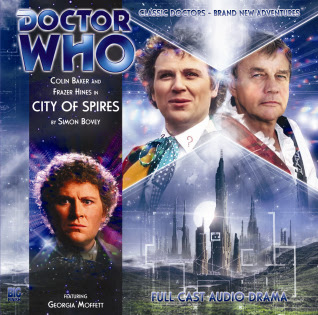 I wish I could say the Doctor's reunion with Jamie McCrimmon and Zoe Heriot made for some pretty great audio plays but the three 2010 Doctor Who audio plays, City of Spires, The Wreck of the Titan, and Legend of the Cybermen are generally disappointing, despite a few bright spots.

"The City of Spires" has the Sixth Doctor (Colin Baker) appearing in 18th century Scotland to find an older Jamie (Frazer Hines), now going by the name Black Donald, a Scottish appellation for the Devil, leading a fight against the English in response to the Clearances. Only in this version of reality, the English forces are intent on drilling for what appears to be oil in the highlands, something the Doctor immediately recognises as tampering with the timeline.

Due to the Time Lords wiping his memory, Jamie doesn't remember most of his adventures with the Doctor--only their initial encounter from the lost 1966/67 serial The Highlanders. And now that the Doctor looks like Colin Baker instead of Patrick Troughton, he never quite believes it's the same person--everyone figures the Doctor is a Frenchman due to his colourful outfit. It must be hard creating a convincing outdoor environment in audio format but I found this one particularly unconvincing. It never really felt like they were outdoors. The dialogue's not that great, either, and Jamie is written as more comically stupid than I remember him being on the show. The second story, "The Wreck of the Titan", which is set on a peculiar version of the Titanic, was only a little better. I liked the way the Doctor figures out there's something not quite right with this version of the Titanic. And I liked that Alexander Siddig plays Captain Nemo, which was a cool bit of casting.

Siddig also plays Nemo in the third story, Legend of the Cyberman, which also features Wendy Padbury reprising her role as Zoe Heriot, though her memories have been restored. Set in the Land of Fiction, the extra-dimensional location featured in The Mind Robber, one of the best loved Second Doctor serials, this one comes the closest to feeling like something right out of the Second Doctor era. Though my favourite part featured the Doctor meeting Dracula (played by Game of Thrones' Ian Gelder) and compulsively comparing him to the real life Vlad the Impaler whom the Fifth Doctor met in the very nice audio Son of the Dragon. Jamie accuses the Doctor of name dropping, as usual, and the Doctor says something like, "I never name drop! Saint Augustine taught me that."

The end of the serial has Jamie withdrawing from a hug with the Doctor for fear of looking "poncy" but I still firmly believe he and the Second Doctor were lovers. Just look at them clutch at each other in The Invasion.