If a Six Turned Out to be Eight 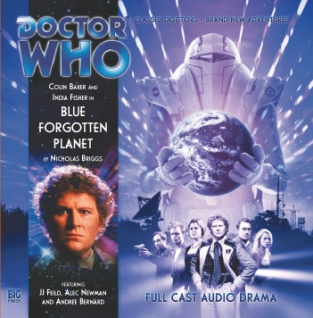 The entire population of Earth driven mad, a saviour of another world blamed for its downfall, and a space station containing superviruses form the storylines of the final three Doctor Who audio plays featuring India Fisher as companion Charley Pollard. Well, in the middle one it's actually only sort of Charley. These three stories, featuring the Sixth Doctor (Colin Baker), are a decent send-off for certainly one of the best companions in the audios and television series combined.

Her final episodes with the Eighth Doctor were a bit more emotionally effective but the cleverness of this complicated story is pretty entertaining. The first one, Patient Zero, introduces Mila (Jess Robinson) who has apparently been a stowaway on the TARDIS since the First Doctor. Only Charley can see and interact with her because Charley has contracted some virus the TARDIS didn't protect her from due to her not belonging--because she'd travelled with Eight before Six. The story also features the Daleks trying to take over the station of viruses and they're opposed by the Viyrans, a sort of cyborg alien species whose business is to protect the universe from viruses. The story is entertaining, the best part being a scene where the Doctor tries once again to reason with the Daleks, however hopeless that always is, but inadvertently teaches them something.

The second story, Paper Cuts, features the return of the Draconians, a space fairing reptilian race introduced in the Third Doctor television serial Frontier in Space. I'm surprised it took so long for them to come back. The interstellar political intrigue of Frontier in Space seemed like it had potential for a lot more stories but maybe they felt a bit too much like Klingons. This story features a Draconian version of chess and there's a concept for entombment I'm pretty sure I've heard in a few other science fiction and fantasy stories but is used here in a creative way.

Charley's final story, Blue Forgotten Planet, features a human race that has inexplicably lost by degrees the mental capacity for civilisation and are being led by a man who thinks he's shooting a reality show for aliens called Blue Forgotten Planet. How's that for prognostication.

Charley and Six never had the chemistry of Charley and Eight and Charley about admits as much here when she talks about how she loved the other Doctor. The character Mila has basically become a complete clone of Charley at this point and India Fisher has a pretty impressive dialogue with herself, playing both characters, in the climax. It must have been particularly difficult since neither copy is really the "evil" twin but for the most part I found myself able to tell which was which from something subtle in her performance. The explanation for why the Doctor doesn't remember her when she first meets him as Eight is satisfying enough and actually was in some ways similar to the last episodes of the television series' latest season.

Posted by Setsuled at 8:26 PM
Email ThisBlogThis!Share to TwitterShare to FacebookShare to Pinterest