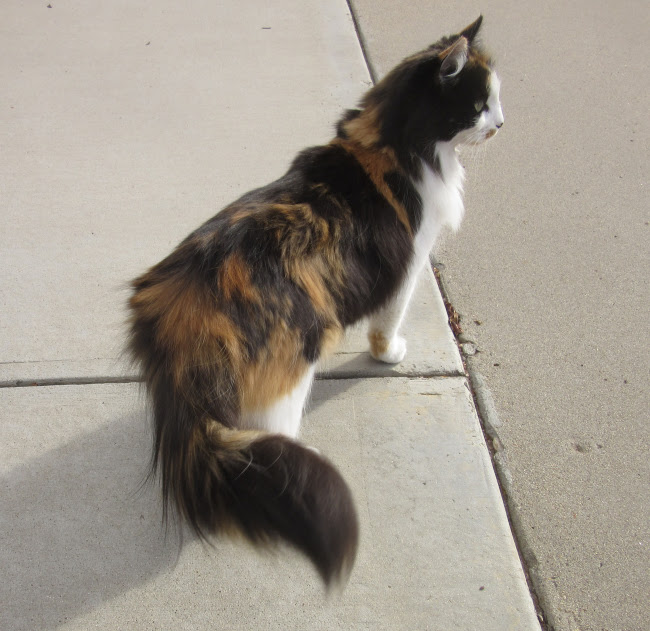 This calico cat ran right up to me again like she did the last time I saw her, several months ago. And before that it'd been several months. She has a good memory because I've seen her run right past other people to get to me. To-day she let me pet her a few times then set herself up in a guard post, staring across the street with her back to me.

Here's another cute animal I saw to-day at university, in the Professional Studies & Fine Arts building, or PSFA, but I always think of it as the PTSD building: 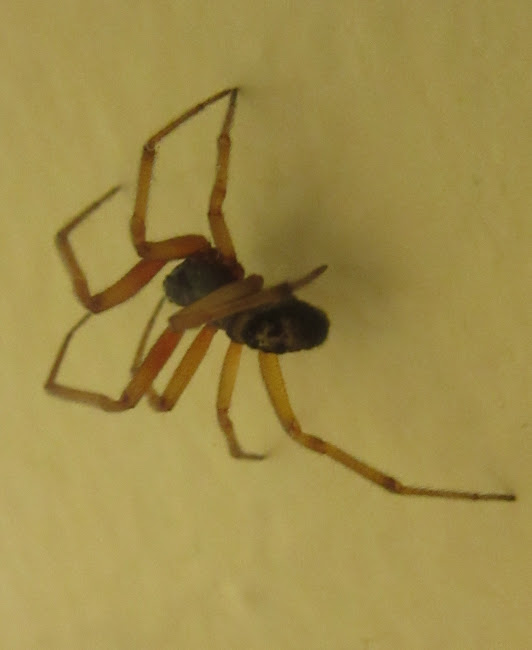 I heard one of my professors there to-day talking about Pizzagate, the conspiracy theory that Democrats use pizzerias for a child sex slavery ring. This led, a few days ago, to a man in North Carolina entering a pizzeria with an assault rifle to "self-investigate". Fortunately no-one was hurt.

It's horrible and sad for many reasons that ought to be obvious. I get stuck on the term "self-investigate". I would say to him, "You mean investigate?" Certainly I think some self investigating would be healthy for him. It's probably not something anyone who believes in Pizzagate is used to doing.

Like the election of Trump itself, learning that so many people believe in such obvious hogwash comes as something of a shock. See, it's not simply that it's repugnant or hateful. Like Trump, it seems like even disgusting people should be smart enough to know better. I'm beginning to realise I take my intellect for granted. Many people apparently have not cultivated the instincts I have that allow me to pass my eyes over a spam e-mail from a Nigerian prince without even having to ponder whether or not it's legitimate. As internet troll culture becomes increasingly smug, naturally it sees no reason to cultivate its critical skills further, and many young and old internet neophytes are handed their smug cards on the ground floor. Hazy ideology floods into the gaps left by critical thinking, just like those memes about Hillary Clinton not getting pop culture references--it seems like it ought to be true, so that's more than half the battle for some.

But still I'm lacking the perspective, I'm not constantly barraged with the fake news that helps build up these conspiracy theories. On a school computer to-day, where I was not signed into any of my accounts and didn't have the little gadgets informing the browser of all my preferences based on frequently viewed sites and videos, I saw on YouTube next to a video I was watching from a 1987 production of Miss Julie a video about Hillary Clinton worshipping Satan to control Bill Clinton. I realised as much as I'm isolated from videos like these because of my preferences, other people are inundated with them the more of them they view.

I don't use a smart phone, my main PC is still using Windows 7. Who knows what the media landscape looks like to someone who's locked into a wider array of software eager to reflect back the user's preferences. Maybe the danger isn't so much computers thinking for people but from stopping thought just as it's starting.

A dust surrounds a rumbling line of knees.
Somewhere in fogs the legs propel the dumb.
In zoetrope speed air swallowed the trees.
A flick'ring shape eclipsed the army's sum.
In coats too shy to raise an arm to strop.
Reflections dulled in summer glinting steel.
A snapping sound from sand presaged the stop.
In tiny wings a chorus chose the real.
A hairless kid caught sight of cars in grass.
Across the hills the convoy took the grain.
In blackened fish the egg presents a mass.
By matins trout accrue for scales a vein.
A hamster wheel enclosed a wolf to run.
A curving grid became the egg and sun.