"Going Shall be Used with Feet" 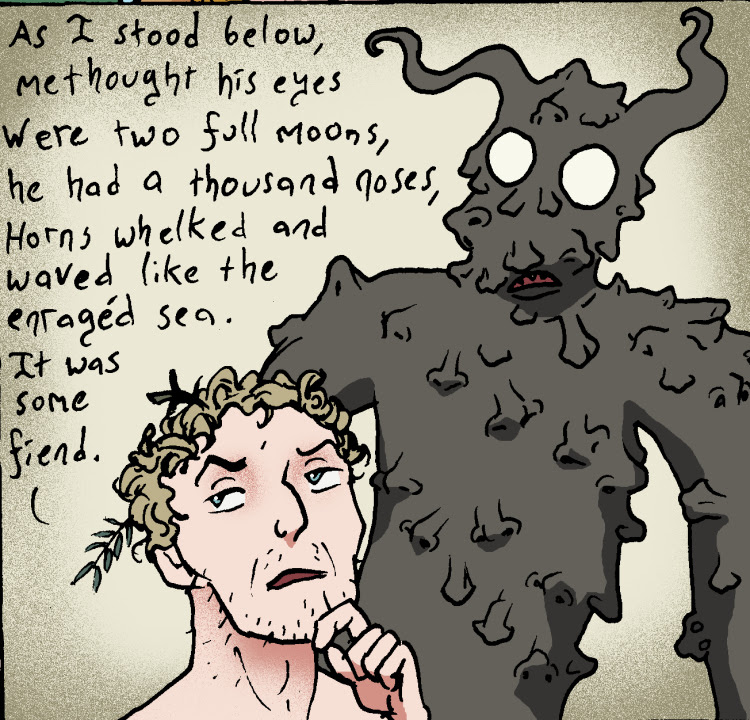 I've been colouring all day to-day. For an Early English Drama class I'm taking, I adapted a small portion of King Lear for a comic--you can read it here. It was a challenging and odd experience, breaking up the lines and figuring out where things turned into another picture. Mostly I did Act Three, Scene Two, the famous Lear raging on the heath scene, which took me back to Venia's Travels, a comic very much inspired by King Lear. It's also only the second time I've worked from a script by someone other than myself, the other time being the Nebari fan fiction I did with Caitlin years ago. So she's in good company.

This doesn't mean I've stopped working on Dekpa and Deborah, in fact I've done a lot of Dekpa and Deborah related material over the past few months. I don't know when you'll see any of it but definitely eventually.

A fountain timed visage was comped to roads.
The piping piled sources sponged of rock.
The petal tips conceive how shadow goads.
Formica chill enclosed the key and lock.
A golden peg attained a century.
In shells abandoned late the lost return.
Inside ordained fish tanks was mystery.
New northern lights'll each switch on in turn.
In papers kept in leafy stacks inside.
A palace placed no call for colonnade.
In wheels a wordy scallion can reside.
Imprinted hair grows silver God's arcade.
Unstoppered cinnamon insists on cloves.
A madness ran from heath to sodden stoves.