Debbie Reynolds dying just a day after her daughter speaks volumes about what Carrie Fisher meant to her. It may also confirm an impression of her that distinguished her performances--that she was a woman of remarkably unaffected sweetness.

One of the ways watching movies is different when the movies were new before you were born is that you tend to watch them in a different order because different films have become significant. So I was surprised when Anne Rice wrote on her Facebook that Debbie Reynolds and Eddie Fisher were such a huge part of her youth before she discovered Singin' in the Rain. For decades, many have considered Singin' in the Rain the greatest musical film of all time and Reynolds was no small part of that. Most of the singing and dancing in the film was done by co-director Gene Kelly who even tap danced for Reynolds' part when the sound was recorded. Perfectionist Gene Kelly may have been wary of a twenty year old woman who wasn't trained as a dancer but with the famous "Good Morning" sequence I think she more than proved herself.

Wikipedia has this anecdote:

Debbie Reynolds was not a dancer at the time she made Singin' in the Rain; her background was as a gymnast. Kelly apparently insulted her for her lack of dance experience, upsetting her. In a subsequent encounter when Fred Astaire was in the studio, he found Reynolds crying under a piano. Hearing what had happened, Astaire volunteered to help her with her dancing. Kelly later admitted that he had not been kind to Reynolds and was surprised that she was still willing to talk to him afterwards. After shooting the "Good Morning" routine, which had taken from 8:00 a.m. until 11:00 p.m. to shoot, Reynolds' feet were bleeding. Years later, she was quoted as saying that "Singin' in the Rain and childbirth were the two hardest things I ever had to do in my life."

You certainly couldn't find many twenty year olds to-day who could do what Reynolds does in that scene. It's not just the hard work of learning the routine, the physical and mental strain involved, it's also the skill and talent to make it look effortless and then to have that impression of extraordinary, unaffected love for being alive and being with people she likes. She succeeds in creating this impossible, heightened reality. 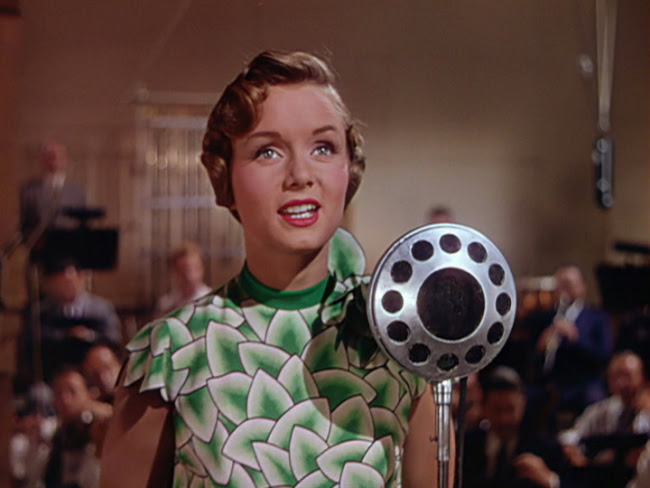 And of course she was a great singer, very much in the style of her time but with a quality of extraordinary clarity combined with a seemingly irrepressible warmth.

The slow descent of pizza pictures shows
What waste engaged the space for Martian men
Too bold to hold a shoulder decked in bows
We tied beside the ice our skaters win.
In climbing fast upon the radio
The school released the students from the beams
Transmitted through the swarm in stereo
For nothing sponged in years the eggshell gleams.
When fortune cries in shaded paths for sun
The leaves begin to talk and pass a coin
At first like streams and then like races run
The rivers build with heavy froth to join.
Like gentle cloaks in skies on velvet track
A gallop zips through zoetropes in black.

Posted by Setsuled at 1:42 PM
Email ThisBlogThis!Share to TwitterShare to FacebookShare to Pinterest