Recurring Fascism in Time and Space 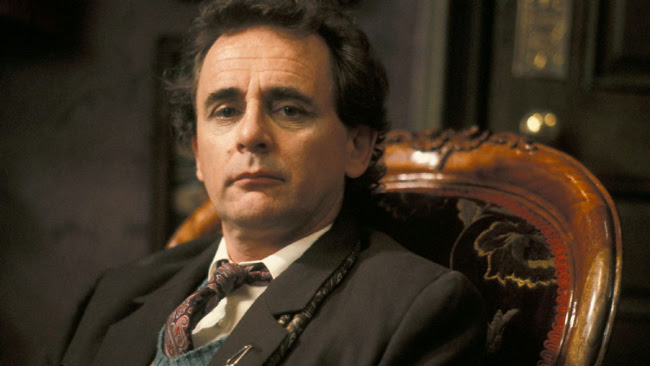 Doctor Who audio plays often deal with sensitive topics the television series would never dare. For example, a series of four Seventh Doctor audios released in the beginning of 2010 feature the Doctor travelling with a companion who is an unrepentant Nazi after he encounters her in Kenya during the Mau Mau Uprising in the 1950s. The four stories aren't perfect but they do explore conceptions of evil and systematic oppression in a thoughtful way. Considering what a tight rope the audio plays walk by having a Nazi who was in any way a protagonist, the fact that they don't come off as completely abrasive and naive is an accomplishment in itself.

The first of the four, A Thousand Tiny Wings, has the Seventh Doctor (Sylvester McCoy) turn up at the door of an English colonial manor in Kenya inhabited by three Englishwomen. They're terrified of the rebels and the matriarch of the group is comfortable expressing the notion that the Kikuyu people are like children who must be governed by the British because they lack the ability to do it themselves. Also in the house is Elizabeth Klein (Tracey Childs), a Nazi who sympathises with the attitude of the British colonists. The Doctor finds himself having to assist these less than admirable examples of humanity against an alien threat.

The Doctor first encountered Klein in the 2001 audio play Colditz. She's from an alternate timeline where the Nazis won World War II thanks to obtaining a CD walkman from the Doctor's companion Ace, who doesn't appear in this 2010 series. In Colditz, we learn how the Doctor himself was responsible for Klein coming to our timeline--an alternate version of the Eighth Doctor (Paul McGann). In the second story of 2010, Klein's Story, we finally hear these events dramatised as the alternate Seventh Doctor, in the timeline where Ace was executed, shows up, gets shot, and becomes Eight, played by Paul McGann, in a much better written story than the primary timeline version of Seven's regeneration into Eight (the 1996 TV movie). It's a nice, very short story that wonderfully demonstrates the Doctor's cunning, particular Seven's ability to play a very long game. A Thousand Tiny Wings, though, faces a number of challenges, not all of which it overcomes. The only Kikuyu character, played by Nigerian British actor Chuk Iwuji, isn't as fleshed out as he ought to have been. But the focus of the story is more to demonstrate that the British have the potential to be just as bad as the Nazis which it accomplishes. A long way from the ardent patriotism expressed on the television series in the past few years.

After this, Klein becomes the Doctor's companion--he takes her along so he can keep an eye on her. They've been together for some time when we catch up with them in Survival of the Fittest, a very entertaining story about an intelligent insect race who communicate by smell. This turns into a fascinating use of the TARDIS translation circuits which translate the insects' smells into audible words and the Doctor and Klein's words into smells. One of the ways writer Jonathan Clements exploits this is to make it so the Vrill, the insects, have no concept of deception or irony--how could you deploy an ironic smell?--so the Doctor and Klein find they need to be careful with what they say, even as it's pretty handy for the Doctor to say, "We're friends" and immediately be trusted. Klein is put in a position where she's compelled to defend this species against humans trying to exterminate them for resources and remarks on how this challenges her ideology when it's turned back on her. Throughout these stories, though, Klein makes no mention of racial superiority and seems to be devoted to the cause of the Nazis entirely in terms of the strong rightfully dominating the weak--thus the title of the story, Survival of the Fittest.

The final story, The Architects of History involves even more alternate timeline complications and is the darkest of this exceptionally dark set. It features a companion of an alternate timeline version of the Seventh Doctor named Rachel Cooper, played by one of the stars of Being Human, Lenora Crichlow. The Doctor does a little of the grand-standing in this story he normally only does in the new television series, talking about how he's the Doctor and he saves people, which makes the resolution of this story particular striking and Rachel's fate particularly sad. We're reminded that Seven is the Doctor who manipulated the Daleks into destroying their own homeworld and proves himself effective in fighting fascists like Daleks and Nazis by guiding them to the inevitable self-destructive conclusion of their might makes right philosophy.

We found a space reserved in severed hands.
The coldest tale input through ink engraved.
It now resides on lemon wall in bands.
A portrait still, a wary life yet saved.
Return to mint occurred at length for crowns.
A blinding wall was stood beside the wine.
A length of acid steeped into the gowns.
In dye derived of royal blood was twine.
In mind the thing could writhe and thirst for seas.
Belief outlined on summits chewing dawn.
In snow we stencilled shades of burning trees.
In atmosphere the ice already gone.
Expanding rings embark from bricks that sink.
Eternity presents an endless brink.

Posted by Setsuled at 8:09 PM
Email ThisBlogThis!Share to TwitterShare to FacebookShare to Pinterest