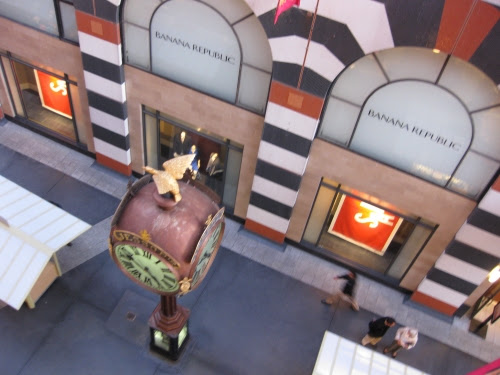 This is a picture of Horton Plaza mall from a 2009 entry in my blog. Happier times for the mall that was originally designed partly by Ray Bradbury. I was there Monday for lunch and found the pizza place I was going to had already closed down after a few months. My sister, who works somewhere where people have to go to get liquor licenses, told me the guy had given up his petition to get a license because he was going to have to close. I wasn't surprised--eateries have been opening and closing at Horton Plaza at a rapid pace. I remember a Mexican place and another pizza place opening in the same spot and closing in the past few years. The food court at the top level is almost all empty lots now and a Taco Bell.

Not long ago, the Nordstrom closed at Horton Plaza. I'll miss it not because I shop there, I don't, but because they had a cool elevator. I like to park at the top of the parking garage then take the elevator which went all the way down to the street and opened at the sidewalk. Since parking used to be free with validation for three hours, I considered it the most sensible place to park downtown. Now parking's only free for one hour and then it's two dollars for every fifteen minutes, which is still better than most places. But why does Horton Plaza, which used to be so busy all the time, feel like it's going to get torn down in a couple months? It's true, people shop online a lot more, but Fashion Valley mall in Mission Valley is doing very well as is University Town Centre in La Jolla, which is undergoing a massive expansion. Well, the answer seems pretty clearly to be the homeless population.

According to this article published last month the homeless population downtown has nearly doubled in the past four years. The upscale malls Fashion Valley and UTC are devoid of anyone who looks homeless when I visit them, partly, I think, due to the difficulty of reaching those malls without a car despite the presence of a trolley station at Fashion Valley. I remember a sign at Fashion Valley prohibiting patrons from wearing hoodies so I suspect there's effort expended to keeping anyone homeless away. Downtown, though, I've been seeing increasing numbers of tents set up on the sidewalks. During Comic-Con, they kind of look normal since people are usually camped out with similar tents for Hall H. I suppose Comic-Con is partly responsible for the higher cost of living that is likely related to this explosion in the homeless population. I'm not even sure I'd feel upset about the Chargers leaving the city if I were a football fan. Maybe the loss of a football team will eventually make this city more reasonably priced again?

Posted by Setsuled at 6:36 PM
Email ThisBlogThis!Share to TwitterShare to FacebookShare to Pinterest