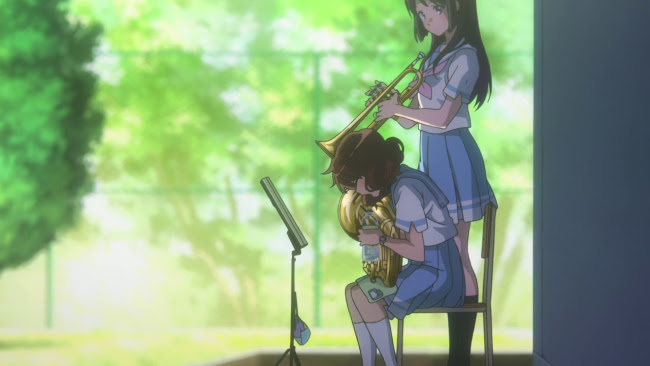 I finished watching the first season of Hibike! Euphonium (響け! ユーフォニアム) yesterday and I'm pleased to say I enjoyed the second half of the season as much as the first. The show has some of the pleasure found in the first half of The Red Shoes, watching this group of characters working hard for their art. Although there are main characters they don't dominate the story which is very effectively more focused on the process.

Another nice thing about it is that, unlike nearly all anime and American movies and television, it doesn't focus on "chosen ones" or people who are better at something that anyone else in the world. These are just kids in a school band and yet the show celebrates how hard they work at it and how passionate they are about it. More impressively, it shows what happens when a student works really hard at something and fails. 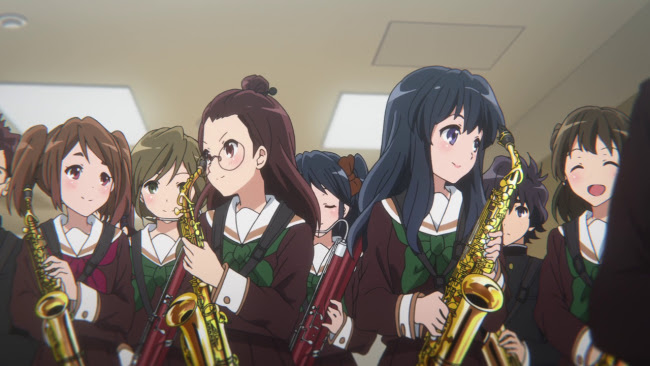 I love the attention to detail on all the musical instruments. One of the main story threads of the season's latter half involves an audition competition between Reina (Chika Anzai) and Kaori (Minori Chihara) for the part of solo trumpet. Yuko (Yuri Yamaoka), who is infatuated with Kaori, becomes bitterly angry when Reina is chosen for the role and a second audition is called after it's revealed that the teacher, Taki (Takahiro Sakurai), and Reina had known each other before he'd become a music teacher at the school. Taki maintains his habitual understated and gentle but firm demeanour and instead of arguing about the accusation of favouritism simply calls the second audition. 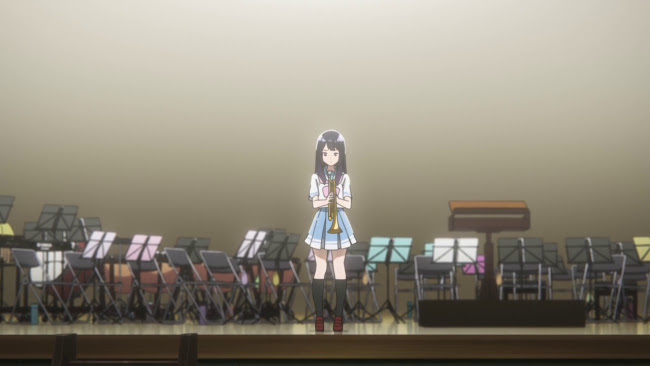 I'm no music expert but even I could tell the difference of quality between how Kaori plays and how Reina plays. Reina shades her notes with more deliberate rising and falling while Kaori seems to be adhering simply to the written music. And she doesn't sound bad, which was nice--the competition feels credible even though the point of the scene is that Reina is obviously better. We can still believe that Kaori has worked very hard for this.

The final couple episodes shift focus back to Kumiko (Tomoyo Kurosawa) who is having trouble playing a portion of the music on her euphonium and is in danger of losing her place if she can't get it right. So we see her practising over and over and still not getting there. All the while, we know that even if she does finally accomplish this, she still won't be the star Reina is. That doesn't make any less effective a scene where Kumiko runs across a bridge and shouts into the night that she wants to improve. 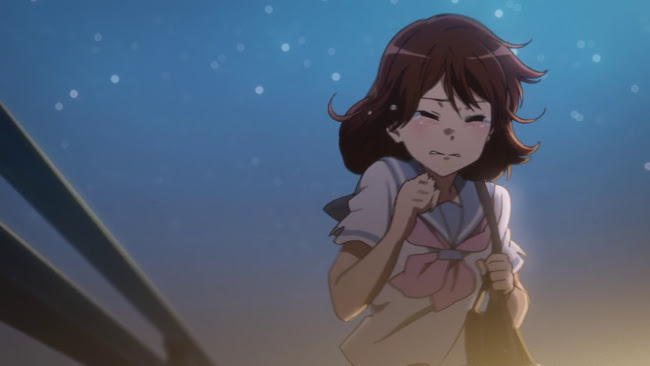 I found myself wondering if she was maybe practising too much. Which is a sign the show is really working, it makes me think about these kids as people with real strategies that might be right or wrong. This is helped a lot by subtle dialogue scenes with effective subtext. When Kaori is practising for the second audition, she asks Asuka (Minako Kotobuki), a charismatic and cavalier character who is seen as an authority by the other students, if she sounds better. Asuka gives Kaori encouraging words while skilfully avoiding giving her a direct answer. The voice actress is also very effective in not projecting anything about an intention to hide her true feeling, trusting the dialogue to establish the tone of the scene. 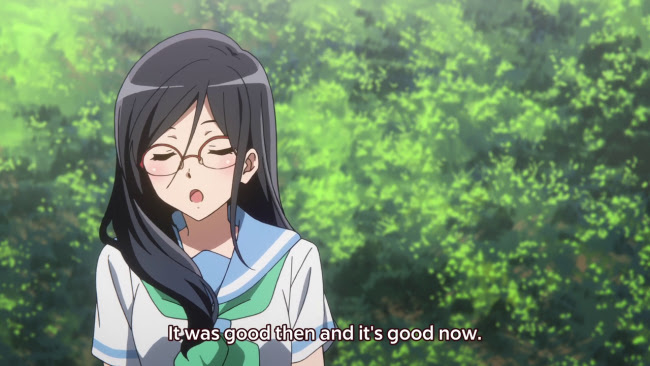 After the eighth episode, there's little focus on romance. The show has some obvious fan service, like several shots of the girls orgasmically drinking from water bottles, and there's something about the whole hearted devotion to their musical instruments that suggests sublimated sexual desire. Unlike a lot of fan service in anime, it feels organic and part of the story. I was hoping for more of a directly lesbian relationship between Kumiko and Reina but after the eighth episode the story hints that Reina might end up with Taki, the romance between a male teacher and a female student being often romanticised in Japanese fiction like it never is in the U.S. (see Maison Ikkoku). But it's kept low key enough that those of us fantasising about Reina and Kumiko going beyond a casual yuri encounter can easily do so. 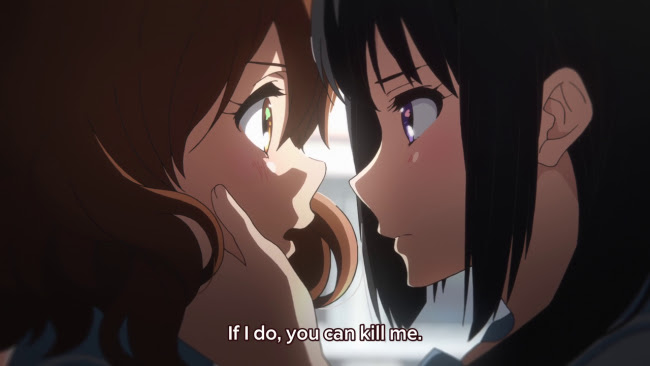