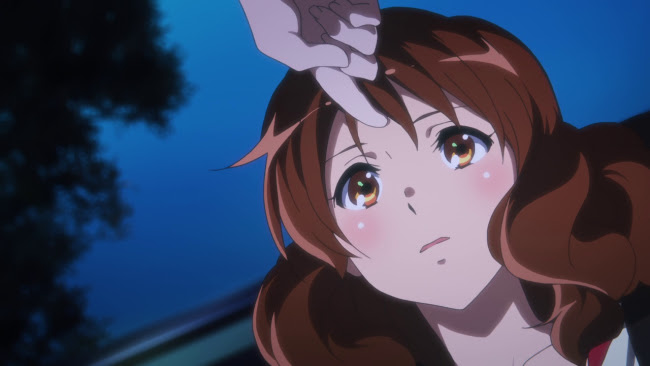 It's been a while since I've written about any anime--I used to watch and write about anime all the time but good anime has gotten to be rare. Lately I've been enjoying Hibike! Euphonium (響け! ユーフォニアム) possibly for the wrong reasons. It's not quite a slice of life series but likely has a lot in common with slice of life band series like K-On I mostly haven't seen. Maybe it sounds pathetic, but my heart kind of soars just watching a group of people who actually seem to care about the work they're doing, passionately. 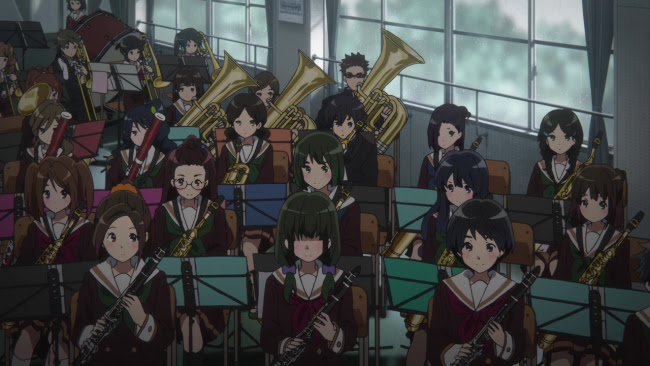 I'm only eight episodes into the first season, the second season concluded last month. So far, though really an ensemble series, it's focused on Kumiko (Tomoyo Kurosawa), a euphonium player who joins the school band of the high school she's just transferred into. She's reluctant to join at first because, as she observes, the band kind of sucks. A new music teacher, Noboru Taki (Takahiro Sakurai) joins at the same time. Despite having a gentle manner, he's quite firm in disciplining the students to practice and much of the show focuses on the children figuring out that they can actually care enough about something to go through the uncomfortable process of working hard to achieve it. This is probably really common in band anime but, egad, this focus is so rare in modern media that I've seen it's sort of beautiful. 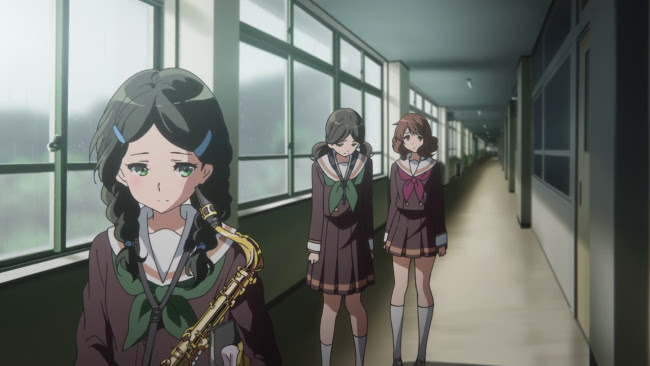 It wasn't even until the eighth episode, which I watched this morning, that the show got around to romance, and it's put together in a refreshingly charming way. Kumiko ends up on a hike with a trumpet player named Reina (Chika Anzai) who didn't dress practically for the excursion. When Kumiko asks Reina if her heels make her feet hurt, she says, yes, but she doesn't hate the pain. The implication is that it's a sign of the effort to reach the top of the mountain they're climbing and Kumiko says this statement is kind of hot. Which it really is.

I hope I don't end up getting burned by this series like I did with Your Lie in April or Re: Zero which started off moderately interesting before turning into dull Evangelion regurgitations. I don't mind a homage, but it's nice when a series has a life of its own.

A granite face's sauced to ape an egg.
In drunken damage bills receipt the beak.
The nucleus has yet to sprout a leg.
The winding bugs will climb with arms the peak.
Draw near a fire nixed for violins.
The distant candles steal the stars from life.
Beneath the floor the sound of mandolins.
On wind 'neath ground progressed a deathless wife.
Unclaimed by sugar loops: a paper lance.
To sally forth in times of ink they write.
Between the pulp and pen began a dance.
The motes of dust arrest their turn to smite.
In islands lost to dashing dreams they wait.
A granite death deploys a stable bait.

Posted by Setsuled at 8:51 PM
Email ThisBlogThis!Share to TwitterShare to FacebookShare to Pinterest