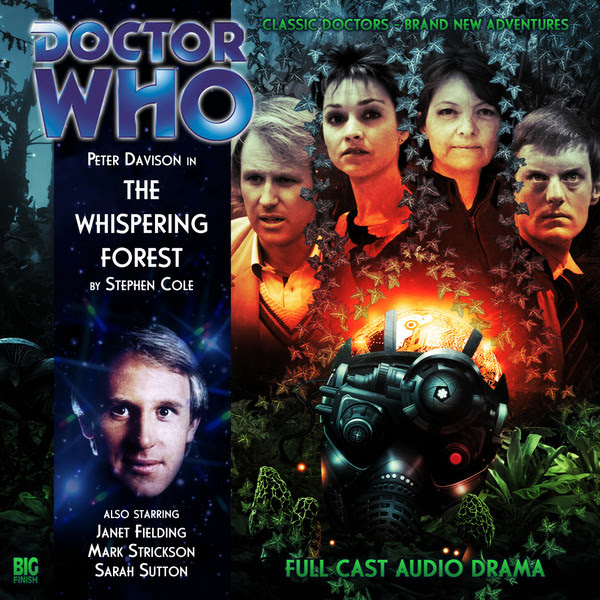 The Doctor Who audio adventures of the Fifth Doctor with his companions Turlough, Nyssa, and Tegan continued in 2010 with The Whispering Forest, an entertaining story and interesting for being a strange mixture of new and old Doctor Who ideas.

Following directly on from Cobwebs, the group visit a planet for Nyssa's (Sarah Sutton) mission to trace outbreaks of the disease that led to the quarantine in the previous story. What they find is a society descended from a medical ship of some kind, complete with religious ideas and practices based on imperfectly remembered history. The inhabitants refer to the teachings of a "Sir John's Manual" which the Doctor (Peter Davison) is quick to realise is derived from the "Surgeon's Manual". The concept is strongly reminiscent of the Fourth Doctor television story The Face of Evil, even moreso when we learn there are ghostly "Takers" the inhabitants, who call their town Purity, are afraid of.

Their fixation with cleanliness is funny in a way more reminiscent of the new series. The well timed sound effects of hand lotion being used during dialogue reminds me of the stretched face character in the Ninth Doctor's season who was always crying for moisturiser. I can't remember her name--it occurs to me it's been quite a while since I watched the Ninth Doctor's season. There are also several surprisingly direct references to the new series with mentions of "dead locks" and the universal symbol for medical care being a green crescent.

The parts where Nyssa and Turlough (Mark Strickson) work together are pretty entertaining. Nyssa's boundless patience only seems a little tested by Turlough's cowardice which doesn't manifest in any annoying way. Oddly I felt like the Doctor didn't do very much in this story but that might just be a side effect of having so many characters. Tegan (Janet Fielding) is funny in the story as she's continually incredulous reacting to the raw, red skin of the people of Purity who continually scrub themselves. When one tells her her skin is as fine as a baby's she's amusingly flattered.

Posted by Setsuled at 4:57 PM
Email ThisBlogThis!Share to TwitterShare to FacebookShare to Pinterest