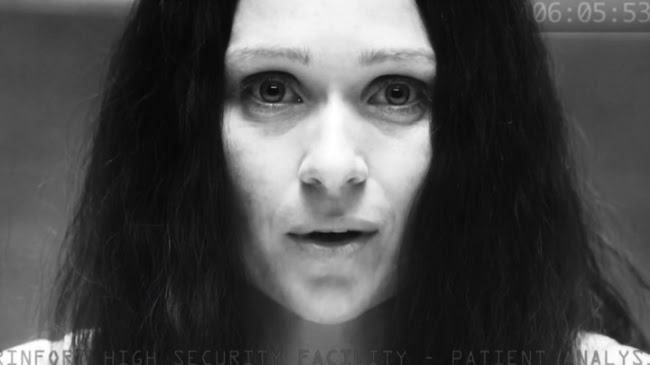 Before last night's season finale of Sherlock, "The Final Problem", I would have never imagined the show could cross over with Mystery Science Theatre 3000. In the world of mad geniuses inflicting bizarre psychological experiments on their subjects created by last night's episode, forcing a man to watch cheesy movies in a space station would not have been out of place. To be sure, it was the least credible episode of Sherlock ever, but aspects of it worked as a sort of illustration of media analysis rather than as the sort of gritty detective series most viewers were probably looking for. 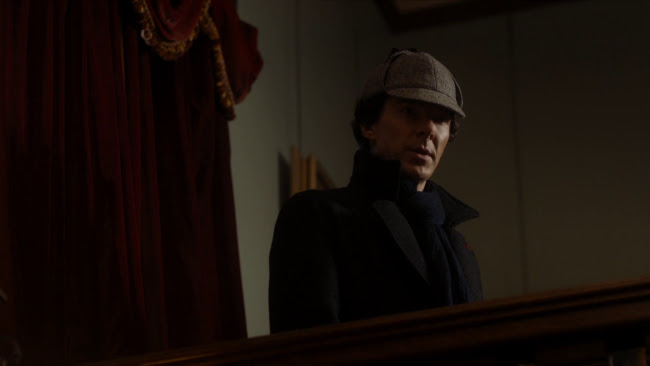 The excellent second episode of the season ended with quite the cliffhanger--John Watson (Martin Freeman), locked in a house, apparently getting shot by Sherlock's newly rediscovered sister, Eurus (Sian Brooke). How did he get out of that one? Well, that's handled in a bit off tossed of dialogue about the shot only having been a tranquilliser despite the fact that Eurus had already admitted to murdering John's therapist. "The Final Problem" begins instead with a little girl waking up on an aeroplane in flight to find the other passengers and crew unconscious and Mycroft (Mark Gatiss) watching a really unconvincingly recreated 1940s film noir. 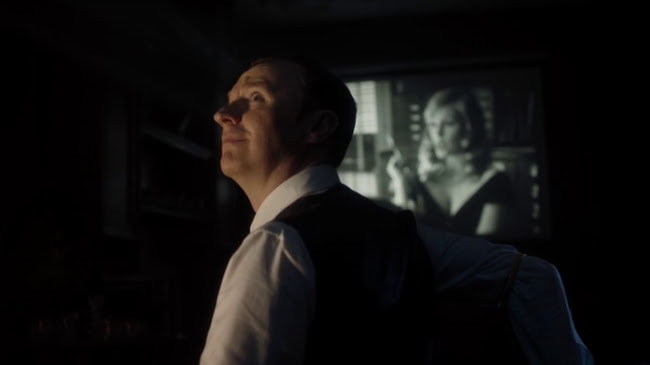 Couldn't they have afforded a clip from Double Indemnity or something? The footage starts getting cut up with old family footage of the Holmes siblings, something that, instead of causing Mycroft alarm, charms the big sentimental schlub. Well, I guess it's not like he's some kind of cold, calculating mastermind. 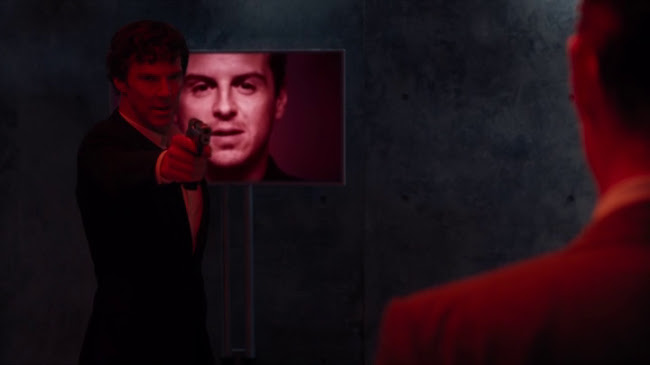 The episode that unfolds feels much more like Steven Moffat's recent work on Doctor Who, particularly "Heaven Sent", where the protagonist, who's normally on top of everything because of his extraordinary genius, finds himself at the mercy of the psychological torture of a bizarre, labyrinthine prison. Moffat and fellow Doctor Who writer Mark Gatiss created something similar for "The Final Problem"--though it actually also reminded me a bit of the 1968 Doctor Who serial The Mind Robber, maybe just for the minimalist, conspicuously artificial sets. 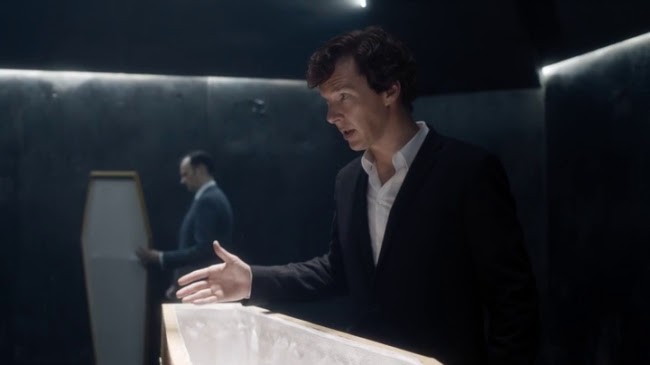 Eurus seems to be capable of hypnosis and mind control, which maybe ought to remind me more of the Third Doctor, and it's this power along with the super secret high tech island prison that help create a sense of unreality to the story. In this atmosphere, Moffat and Gatiss effect a violent feminist deconstruction of Sherlock Holmes and Sherlock. 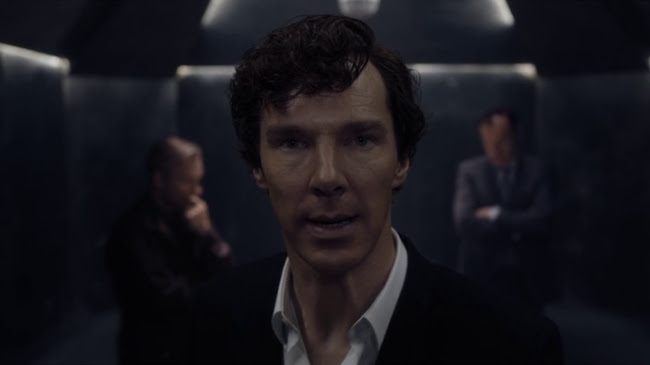 In her essay, A Room of One's Own, Virginia Woolf wrote about a hypothetical sister of William Shakespeare in order to illustrate the foolishness of the argument that women can't write as well as men because throughout history the overwhelming majority of celebrated writers have been men. Woolf uses Shakespeare's sister to show all of the roadblocks a woman would face throughout her life not only to publishing but also to the free time and cultural approval a writer requires to hone her skill. All of the roadblocks that a male writer wouldn't have had to face.

The Sherlock's sister created for "The Final Problem" (which bears no resemblance to the Conan Doyle story of the same name--it was adapted for "The Reichenbach Fall" in season two) is described by Mycroft as testing for genius even better than himself, which says something since Mycroft, in the original stories, anyway, is supposed to be even more of a genius than Sherlock. Not only is Eurus smarter than her brothers, she's apparently behind nearly every distinctive aspect of their characters--she taught Sherlock (Benedict Cumberbatch) how to play violin and she's behind some of Mycroft's most extraordinary predictions. But no-one's heard of her because she never got all the same opportunities the boys got. Even Sherlock has completely forgotten her because . . . well, the explanation for that is a bit hazy, but with all the other stuff, maybe logic doesn't really matter. Of course, she's also set back by being a sociopath. But then again, so's Sherlock, albeit a "high functioning" one. 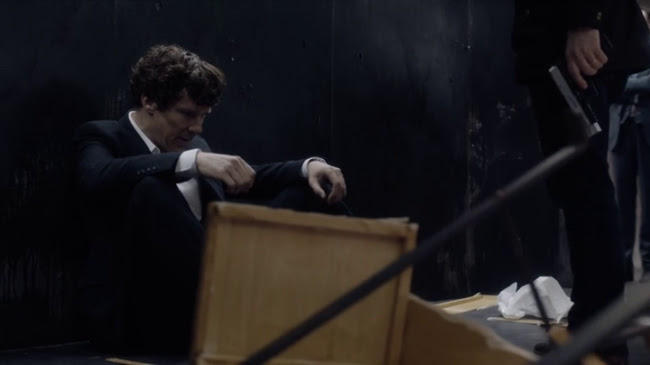 The tortures Eurus puts Sherlock, Mycroft, and John through are designed to degrade and diminish their presumptions about their own genius. She has Sherlock and Mycroft solve a murder and then she kills the innocent suspects anyway. She destroys Sherlock's belief in the virtue of his controlled emotions by showing him how painful it is to say out loud to the sadly underdeveloped Molly Hooper (Louise Brealey) that he loves her. Why does Eustus have such an axe to grind? I assumed it would, like Shakespeare's sister, have something to do with gender but we don't get there until the climax. 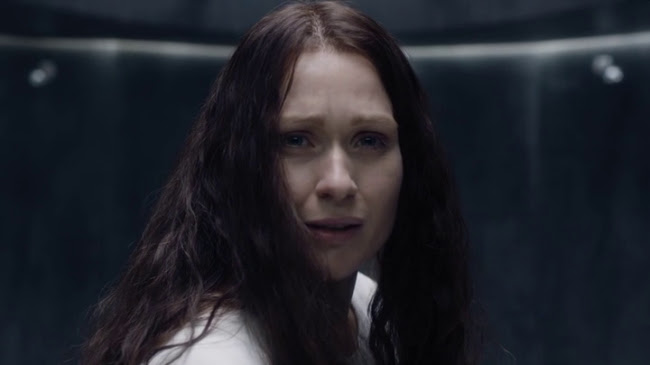 Eustus wasn't allowed to play pirates with Sherlock and his best friend when they were little kids. So she traps "Redbeard", the other little boy, in a well and gives Sherlock a riddle to solve so he can find his friend. The story becomes an adaptation of "The Musgrave Ritual" but instead of the crown of Charles I it's a human life. As someone who's been studying the English Civil Wars for two years, it would've been nice to have seen the story about Charles I's lost crown but I guess they can't please everyone. Well, you won't catch me sending out death threats or calling Steven Moffat a regicide. 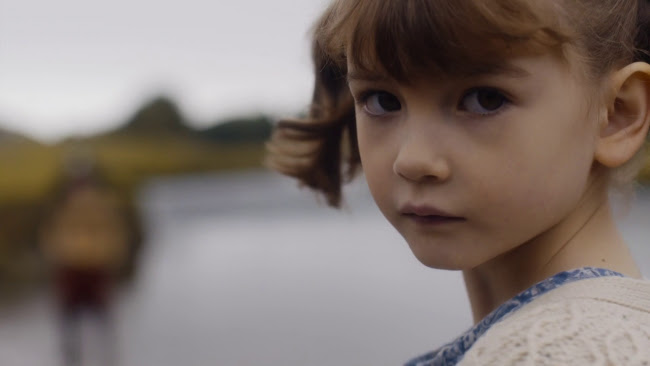 And I bet there are those who would call Steven Moffat a sexist for making Eurus into a killer. To such people, I would say remember that Eurus is mentally like Sherlock, except even more like Sherlock than Sherlock, and predisposed, like him, to sociopathy. In the events depicted, the Sherlock siblings looked to be five or six years old--we learn Mycroft is the eldest, seven years older than Sherlock, and that Eurus is one year older than Sherlock. The fact that she gave Sherlock the riddle to solve meant she likely didn't intend to kill Redbeard (he had a name but I can't remember it). She had faith that Sherlock Holmes would solve the riddle and find the kid, the same faith that Sherlock had in himself that she viciously tears apart in adulthood. Once she was responsible for the death of one person, she discovered how little death means to her because she's a sociopath and she had no qualms about killing other people. The point isn't that she's weaker than Sherlock, it's that she is who Sherlock might have been if he hadn't been so lucky. He was lucky enough to possess the favour given to little boys, which gave him confidence in himself, which was part of the problem because Eurus bought into that confidence too. 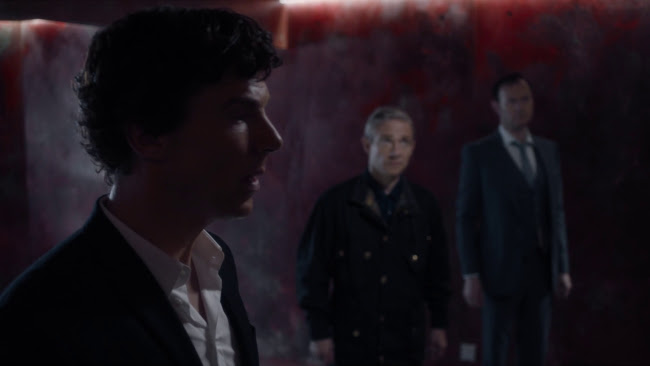 Still, it might have been better to have more of the episode focus on this. But otherwise it was an entertaining if uncharacteristically campy episode. It was a nice episode from a completely different series. I kept expecting it to have all been a dream sequence.

In marhsmallow helmets an army melts.
The birds have pegged the polka dots aright.
Dispersed so thin to white align the belts.
A longer torso never sought the fight.
A course defined for bristling shores enlarged.
Into the fence arrays of dogs appeared.
Across all kinds of houses chairs were charged.
Above the hairless legs approached a beard.
The wooden soldiers chase a murderer.
Eternal cardboard sets become the clubs.
A dreaming glass projects a predator.
She's sending them Mifune's beard with subs.
Inside a second bag are twenty one.
Departure shows that lightning's not a sun.

Posted by Setsuled at 7:19 PM
Email ThisBlogThis!Share to TwitterShare to FacebookShare to Pinterest