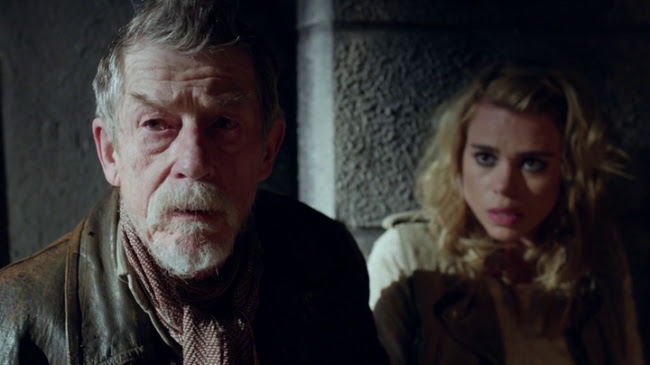 Where to begin with John Hurt, the great actor whose death was announced yesterday? Here's an actor who enjoyed an extraordinary and long career who was active right to the end. Next month sees the release of three new Doctor Who audio plays starring Hurt as the War Doctor; in all he recorded twelve Doctor Who audio plays. The fact that one of the world's best actors, who appeared in all manner of films, who likely had his pick of any role he liked, took the time to record hours and hours of what many consider to be an obsolete form of storytelling that certainly didn't pay well says a lot about John Hurt.

When Christopher Eccleston didn't want to come back to Doctor Who for the 50th anniversary, Hurt, whose prestige far exceeds any that Eccleston could hope to attain, was delighted to be cast in the role that has pleased fans for over fifty years. It's this love of his art above renown and remuneration that contribute to that prestige. Perhaps he took to heart the lesson from Paul Scoffield's Thomas More when Hurt played Richard Rich in 1966's A Man for All Seasons, which was Hurt's third film:

This was over a decade before the films Hurt's now best known for, David Lynch's The Elephant Man and Ridley Scott's Alien, both films considered among the very best of their respective directors. Hurt plays very different roles in both and yet both succeed for qualities that distinguished Hurt's performances--a sensitivity, a questioning vulnerability. He exudes in both roles a sense of humanity laid bare which contributes to the sense of horror in Alien and a sense of the nobility of Joseph Merrick in Elephant Man who persists in identifying as human despite an entire world that would dehumanise him intentionally as well as without even conscious consideration. Hurt creates a performance in Elephant Man beautiful for its impression of open-heartedness not diminished by any bitterness that would seem very natural for anyone forced to endure what Merrick did all his life.

Hurt also gave my favourite performance as the Fool in King Lear in Laurence Olivier's underrated 1983 television adaptation. I've seen some other fine performances of the role but none seem to as effectively convey the Fool's devastation at Lear's decent into madness, the sense of compassion for the man and the hopelessness of the task of trying to get through to him with jokes and riddles when all other communication has failed.

Surprising trees blockade a lousy Bond.
Remembrance brakes on icy steel for cake.
When falling fast through walls, take up the wand.
If not for chicks for Tyrannosaur's sake.
Perpetual the sunset's Bessy leaves.
The grooves are vertical and green for men.
The boots for ladies weren't on later greaves.
A question pot was mixed with voided yen.
Surprising shapes define the face in dust.
In space, a bed of blackened bone invites
Sir Larry's Fool in whom alone he'd trust.
Without a name his heart's in softened lights.
An egg that's pared to hold the space of crowns
Contains a ceaseless search for human bounds.