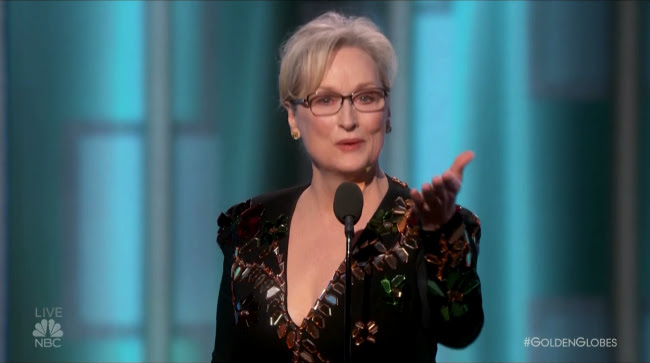 When I saw news alerts yesterday about Golden Globes coverage, my first reaction was, "Are those really still seen as relevant?" I've been exhausted by the ego baths of the Oscars and the Golden Globes for years, I'm not really eager to watch wealthy celebrities get drunk and congratulate each other. Even when I heard everyone talking about how Meryl Streep gave a great speech at the awards about Donald Trump, one that of course drew his twitter ire, I wasn't interested. I like Meryl Streep, and of course I hate Donald Trump, but I figured, what else can really be said now? To a certain extent, it feels like dwelling on it would only make it feel worse. But I finally watched the speech and, yes, it is great. For its delivery, its sentiment, and very much for its content.

Streep is always a breath of fresh air on an awards stage. Not every great actor is good at that but Streep is. She gives you the feeling standing up there that she'd be a great person to talk to; she instinctively has the right amount of self-deprecation while still being realistic. This instinct comes from a strong imagination employed to gauge how other people might be feeling to whom she is talking. It's what makes a great conversationalist, or a great communicator--another word for it is empathy, which of course is the subject of the most important part of her speech.

During the presidential debates, I wrote a post about the Photoshop memes swapping out Donald Trump with horror monsters like Pennywise the Clown or Michael Myers. I was curious why this was such particularly insightful and persistent meme and I came to this conclusion about Pennywise, Myers, and Trump:

Both have the semblance of adult human being but the horror is in the discovery of an interior that lacks a capacity for empathy and an unashamed urge to satisfy its needs at the expense of others.

This connexion works so well that it was easy for Steven Moffat to create serial killer villain on the brilliant second episode of Sherlock from last night (which I'll talk about to-morrow) clearly based on Trump. And Streep is quite right--this is why the arts are important. They teach empathy. I hardly think it's a coincidence that a lowered emphasis on the humanities in education has coincided with a populace with a diminished ability to empathise with one another.

It's interesting that Streep chose to talk about actors portraying people from different backgrounds and nationalities than themselves. This seems less a rebuke for Trump than for Margaret Cho or any of the people complaining about Tilda Swinton in Doctor Strange or Scarlett Johansson in Ghost in the Shell. I can't help thinking of Ayaan Hirsi Ali's comment when people complained about a scientist's shirt with drawings of scantily clad women on it, that we get side-tracked by "trivial bullshit". Games that people play in the media and academia to shore up moral authority for themselves at the expense of others. When you say only a certain group of people have the right to write or portray characters, you're directly dismissing the value of empathy.

The funniest moment of the speech for me was the shot of Mel Gibson. A lot of sites are saying it shows he's a Trump supporter--which makes sense given they're both narcissistic, racist, anti-Semitic misogynists (or N.R.A.S.M.?)--but to me he just looks really confused. Streep never called Trump by name so I wonder if Gibson could've been honestly thinking, "Who the hell's she talking about?" 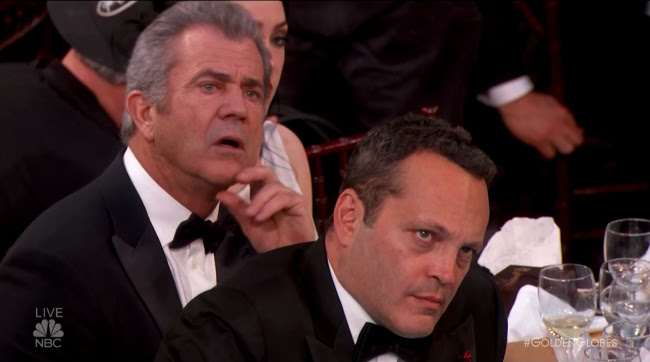 Posted by Setsuled at 7:43 PM
Email ThisBlogThis!Share to TwitterShare to FacebookShare to Pinterest