The Rise of the Mara 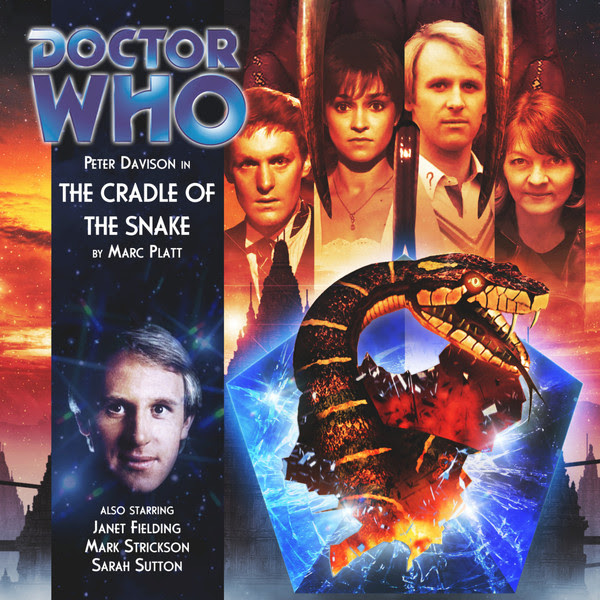 Through a low brow, tacky reality show arises a malevolent force that reduces a powerful industrial civilisation to primitive clans of religious zealots. The 2010 Doctor Who audio play The Cradle of the Snake finds the Fifth Doctor and his companions encountering the Mara once again, the possessing spirit who menaced the group in the television serials Kinda and Snakedance. The Cradle of the Snake is a good story that nicely blends a more modern sensibility for this 1980s cast of characters while also credibly developing the relationships between them in a nicely natural way.

The story begins with Tegan (Janet Fielding) once again being possessed by the snake demon, considered the source of all evil on the planet Manussa. In an effort to help rid Tegan of the creature, the Doctor (Peter Davison) takes the TARDIS back to that world, but thousands of years earlier than when they were there last, apparently on accident. The ancestors of the forest tribe they'd met in the television episode live in a crowded, futuristic metropolis complete with cell phones and a reality television series starring a man who reads people's destinies via strange crystals.

Turlough (Mark Strickson), who hadn't joined the show yet for the television episodes about the Mara, has to be told what it is. The Mara tries to recruit him as a lackey but is surprised to find him more resistant than expected. It would have been nice to hear Turlough being a little more temped. He and Nyssa (Sarah Sutton) meet a police officer played by American actress Madeleine Potter. Taking place in an alien civilisation, it's kind of strange hearing one person with an inexplicable American accent. Maybe it signifies that she comes from another country. It's never addressed at any rate.

A strange, effectively creepy side effect of the crystals on the reality show is that they create dreamlike animals in the real world, including snakes. Dan Stevens of Downton Abbey plays the callous reality show host who doesn't seem especially interested in the fact that he's altering the fabric of reality so long as he's getting ratings.