Ghosts of the Bog 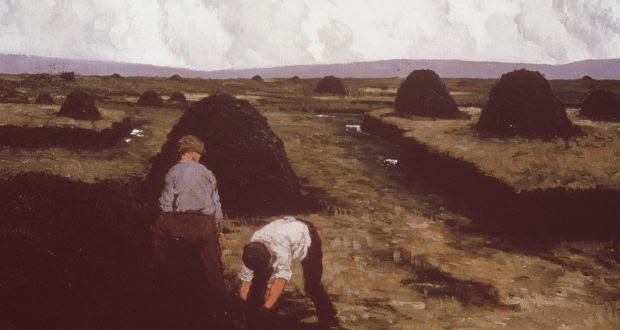 Another lovely tale of an ancient, inherited European estate by HP Lovecraft is "The Moon Bog". A very short story written for Saint Patrick's Day, this one is about a man named Denys Barry who inherits an estate in Ireland. Again, the consequences are tragic as contact with the past proves a too strange and horrible experience.

I've been thinking more about the strange conflict between Lovecraft's longing for contact with the past and the horror with which he portrays such contact actually achieved. I don't think this horror is necessarily a comment on the past itself but on the unnatural process of the present coming into contact with the past. Lovecraft uses the phenomenon of ancient bodies discovered in peat bogs to marvellous effect. The improbable preservation of corpses in this way, that nonetheless leaves them hideously altered, certainly stirs the imagination with ideas of the cost of traversing the centuries.

The wide plain, the golden moonlight, the shadowy moving forms, and above all the shrill monotonous piping, produced an effect which almost paralysed me; yet I noted amidst my fear that half of these tireless, mechanical dancers were the labourers whom I had thought asleep, whilst the other half were strange airy beings in white, half indeterminate in nature, but suggesting pale wistful naiads from the haunted fountains of the bog.

At the same time, this description has a strange prettiness to it. I don't remember Lovecraft mentioning naiads anywhere else. Most of the horror in what the narrator beholds can almost be imputed entirely to the narrator himself.

Over the bog was a deluge of flaring light, scarlet and sinister, and pouring from the strange olden ruin on the far islet. The aspect of that ruin I cannot describe—I must have been mad, for it seemed to rise majestic and undecayed, splendid and column-cinctured, the flame-reflecting marble of its entablature piercing the sky like the apex of a temple on a mountain-top.

Not for the first time, I found myself thinking about Lovecraft's preference for minimal dialogue. The narrator in "Moon Bog" discusses interviewing labourers who experienced bad dreams. Other authors might introduce one labourer and try to paint a picture of his personality to lend a greater sense of credibility. Lovecraft's preference here to keep an academic tone gives a sense of isolation, of someone cornered in the coldness of his own mode of expression. Elsewhere, Lovecraft does invoke colloquial dialogue quite memorably to analyse personality as a specimen of horror, as in "The Picture in the House". That, again, is to show the unnatural quality of a preserved past. I find myself tempted to think there may have been some reflection on himself as someone who longed for the past, that the horror he was portraying was the horror of finding himself so out of step with time in which he lived. I don't think that's something he could have altered even if he wanted to.