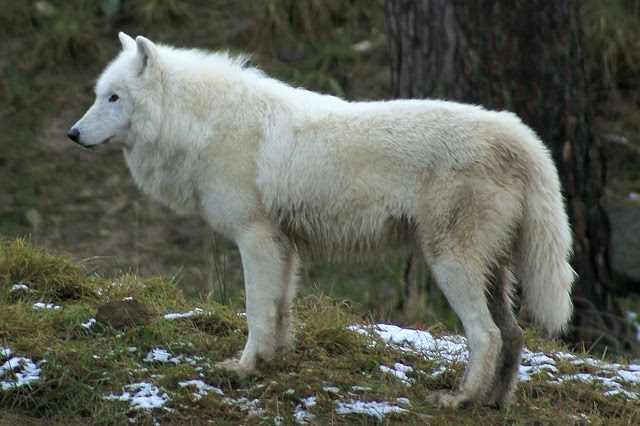 I've loved werewolves since I was a kid so I was looking forward to the two werewolf stories included in H.P. Lovecraft Selects, a collection of influential short horror fiction drawn from an essay Lovecraft wrote. The first werewolf story is "The Were-Wolf" by H.B. Marryatt, taken from a collection of ghost stories published in 1918. There's a nice folk tale quality to the story, it has the motive often found in such tales of warning the reader about subtle ways the Devil might try to trick you.

Set in eastern Europe, the story is told in first person by a narrator speaking of a period from his childhood. His father fled from Transylvania with his three small children after murdering his wife and her lover. I really like how the story begins at this level of instability--the father's already racking up sins but his kids are still dependent on him and have implicit faith in him, even though he beats them. And he ends up not even being the villain, instead it's a mysterious, beautiful woman in white fur who seduces him to become step-mother to the children. It's not hard to see she's the were-wolf referred to by the title.

We all three trembled, we hardly knew why, but we resolved to watch the next night: we did so—and not only on the ensuing night, but on many others, and always at about the same hour, would our mother-in-law rise from her bed, and leave the cottage—and after she was gone, we invariably heard the growl of a wolf under our window, and always saw her, on her return, wash herself before she retired to bed. We observed, also, that she seldom sat down to meals, and that when she did, she appeared to eat with dislike; but when the meat was taken down, to be prepared for dinner, she would often furtively put a raw piece into her mouth.

Like in a lot of great, weird horror fiction, the trouble isn't spotting the monster, the trouble is that the horrible, insurmountable threat becomes undeniable. Their father invited the woman into the house and made a pact with the spirits of the mountains when he married her, pledging even the lives of his children if he betrayed her. The lesson is clear; if someone asks you to invoke demons in your marriage vows, don't do it.

A hollow engine burned the pumpkin car.
Developed crypts were flipped to sterile stones.
Dejected ghosts could joke when 'long the bar.
The zombie starves 'till humour hits the bones.
Intoning bronze adopts the storied scowl.
Descending lines engrave a ragged face.
In shaded niche the looker goads a howl.
Contorted claws support a stony base.
Extended nights became a greener state.
The brittle leaves have seemed to move themselves.
A weirder glow emerged from 'neath a grate.
A row of eyes replaced the quiet shelves.
Another bowl contains the candy now.
The sugar waves embrace the rotting prow.

Posted by Setsuled at 11:20 AM
Email ThisBlogThis!Share to TwitterShare to FacebookShare to Pinterest
Labels: hb marryatt, horror, hp lovecraft, literature, the werewolf, werewolf