Nothing is Futile with Gold 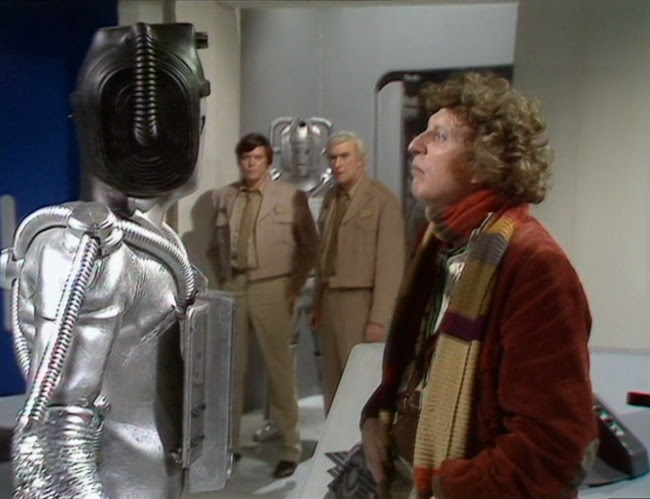 Who would've thought the Cybermen's big weakness would be gold? Gerry Davis, that's who. He wrote the 1975 Doctor Who serial Revenge of the Cybermen, the final serial of Tom Baker's first season. It's canon but I guess I can't blame future episodes for not frequently referencing this flaw in Cyberman tech. As I said last week, I tend not to like Genesis of the Daleks as much as most people, and I think my fondness for Revenge of the Cybermen is almost as strange. 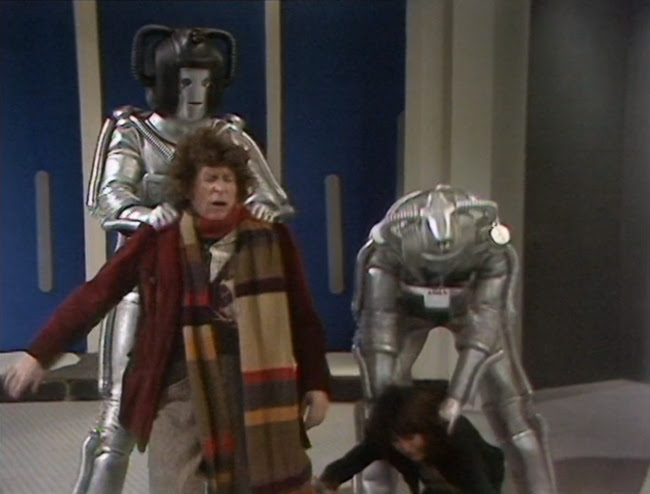 It's true, as the first appearance of the Cybermen since the Second Doctor era, it's a bit of a letdown. These new Cybermen are a bit more emotive, especially when it comes to the Cyberleader played by Christopher Robbie, well known as a presenter and announcer. His take on the character is of the typical, teeth gnashing, fist shaking, pulp serial villain variety and, along with the slightly silly vulnerability to gold, does a lot to undermine the sense of threat projected by the eerily quiet, inexorable silver figures in The Invasion and The Moon Base. 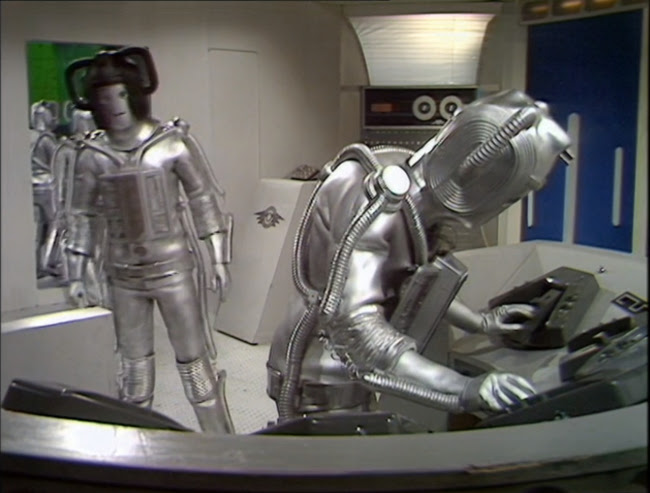 There's also the not entirely organic reuse of the sets from The Ark in Space. Set thousands of years before that serial, Revenge of the Cybermen finds the the station was once simply a "beacon", a sort of space traffic coordination and research depot. You'd think it would've changed a lot more over a thousand years.

But, again, I like this serial. Mainly for the Vogans, the civilisation living on a previously undiscovered moon of Jupiter. It's so rare for aliens in this era to actually look like aliens and after the cheap looking Genesis of the Daleks it's nice to see that all of the members of this species are outfitted with makeup and facial prosthetics. 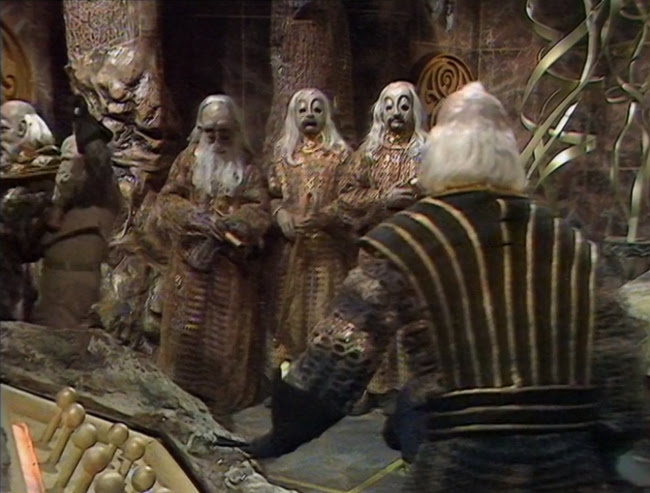 They have an aesthetic, too, that goes along with their ample gold supply. Of course all their interior decorating is built around gold, too, and it gives a definite sense of the culture. 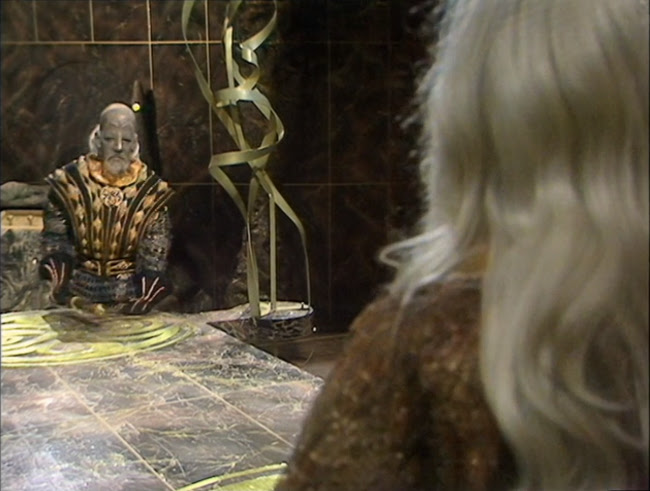 Like Ark in Space, Revenge of the Cybermen features references to politics, in this case the Vogans are split between unmistakeable liberal and conservative factions with the liberal leader being the villain. 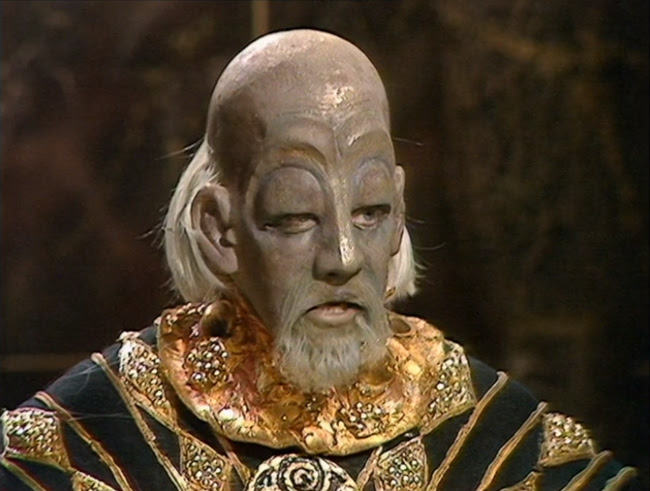 Vorus (David Collings), the liberal leader, is in charge and a bit of a tyrant. Like a left-wing dictator, he talks about "liberating the people" even as he imprisons suspicious characters like Sarah (Elisabeth Sladen) and Harry (Ian Marter) on no evidence. He's also intent on expanding the Vogan presence in the galaxy and derides his opponent's isolationism, mocking him for wanting the Vogans to remain underground. The caves where the serial was shot are pretty impressive, though, and lend the serial some great atmosphere while further contributing to the sense of the place as an alien world. 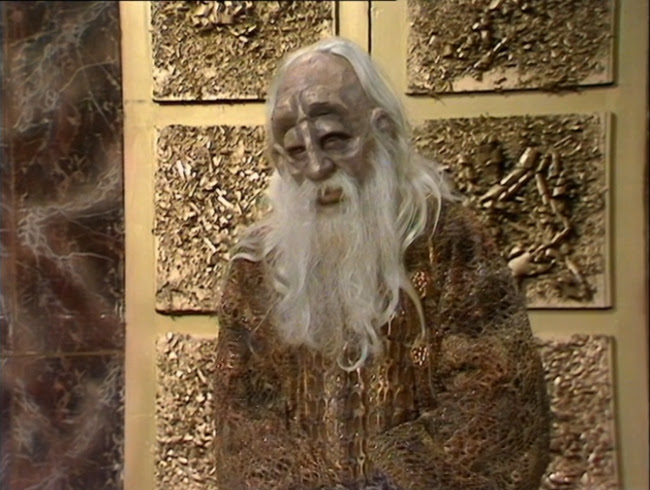 The conservative leader is the kinder and gentler old man, Tyrum (Kevin Stoney), who frees Sarah and Harry and is actually willing to listen to them. Of course, the failings of one leader and the virtues of the other could as easily be swapped and Davis doesn't make any real substantive argument for the superiority of conservative philosophy. But the characters work well enough. 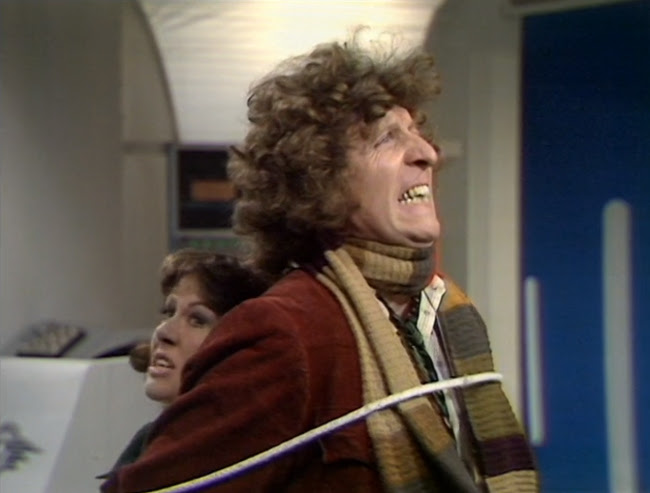 Tom Baker is particularly good in the serial, too. His bug eyes when Sarah says it's good to see him and he enigmatically asks, "It is?!" is one of many examples of how Baker could so effectively use his physical features and subtly creative line deliveries to great effect.