Two, or More, of Each 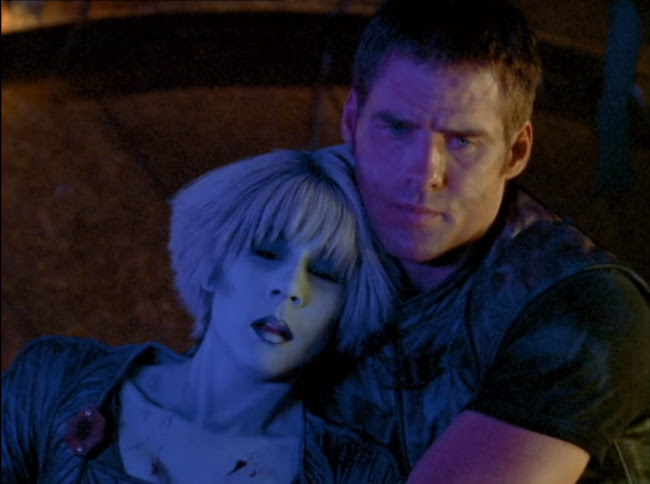 One of the fundamental horrors of existence is there are always people, just like you, suffering terribly. A jarring episode of Farscape gives some idea of what it's like when our mental safeguards against consciousness of this are stripped away. 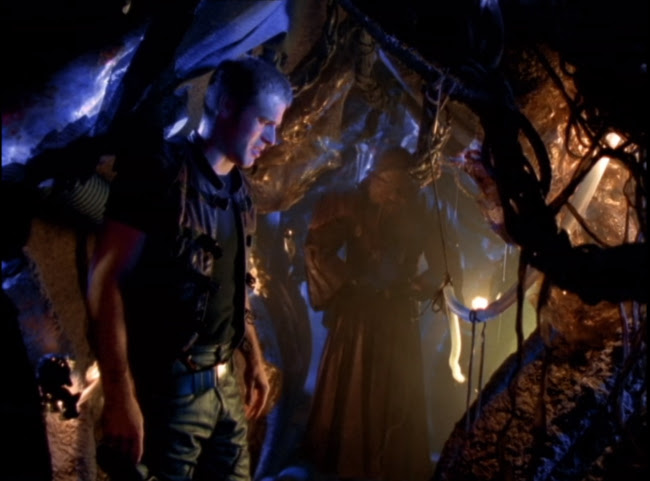 Zombies usually seem to me to be a metaphor for the homeless nowadays, or how people see the homeless--a mass of hungry humanity, the threat of their violence working as a transmutation of the vague feelings of guilt and anxiety the haves have regarding the have-nots. If that's so, the zombies in this episode of Farscape, the ravenous and dishevelled Sebacean cannibals aboard a wrecked Leviathan, are particularly effective for how they remove a layer of cognitive insulation. 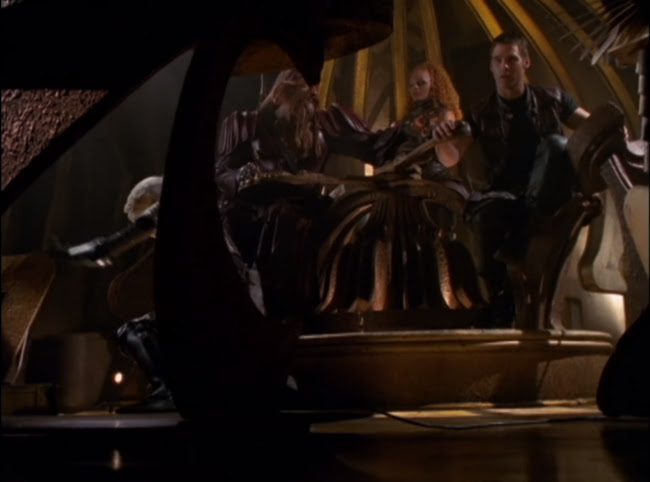 But even before we get to them, there's already a forced identification with the less fortunate when Crichton (Ben Browder), D'Argo (Anthony Simcoe), Chiana (Gigi Edgley), and Jool (Tammy MacIntosh), travelling in a badly damaged transport pod, mistake another Leviathan class ship for Moya. Or at least Crichton mistakes it for Moya. D'Argo spots the control collar and warns Crichton that this signifies Peacekeeper control of the vessel, and being imprisoned by the Peacekeepers may be worse than dying in space. But Crichton lands anyway and soon things appear to be even worse than D'Argo feared. The interior is wrecked and decayed and D'Argo is immediately attacked by a filthy, incoherent Sebacean who tries to bite his neck. 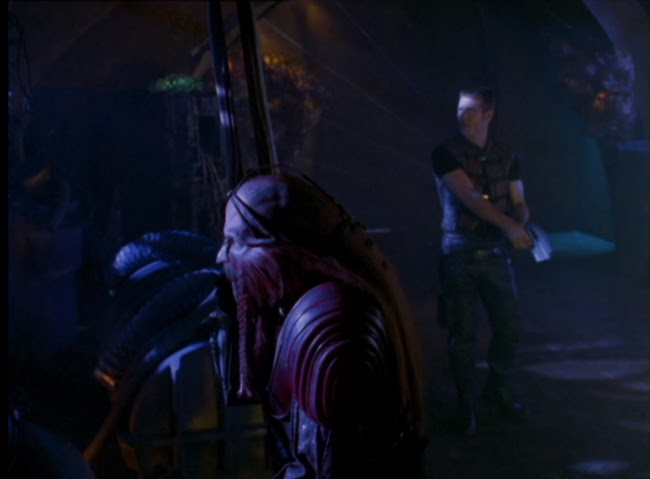 The disquieting sight of a living ship just like Moya in a state of decay is followed by an encounter with people reduced to behaving like rabid animals. Jool, the sheltered school girl, continues to freak out in Kate Capshaw fashion, and helpfully screams at Crichton that he needs to fix the transport pod so they can leave. Chiana's at her wit's end with the new girl and resorts to hitting her at one point. After everything everyone's been through, Jool's spoiled behaviour is naturally abrasive but Chiana soon finds herself confronting things outside her own comfort zone in some of the episode's most memorable scenes. 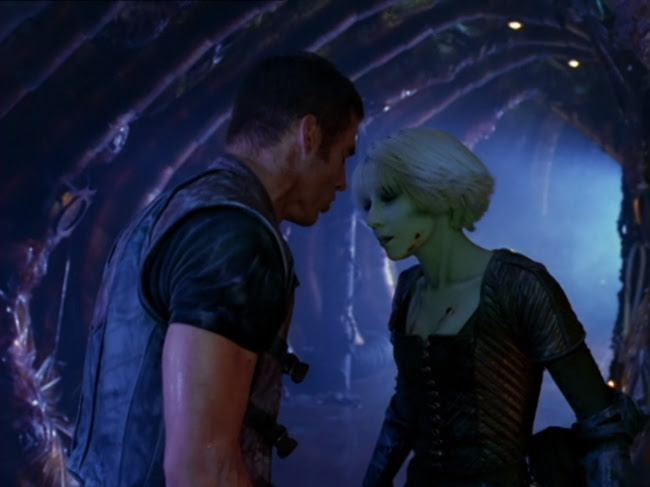 The episode's villain, Kaarvok, played by Shane Briant as an excellently eerie junkyard gentleman, lives by "twinning" people--turning them into two perfect copies, and eating one of them. He explains several times that one twin isn't just a copy of the other--both resulting beings are essentially the original. We see this power demonstrated when he encounters Chiana, twins her, and then devours one Chiana while the other watches and, after a moment's hesitation, runs despite her twin's pleas for help. 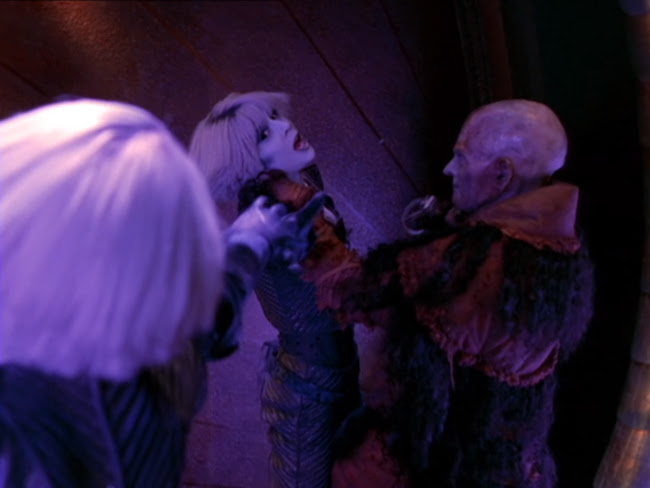 It's particularly hard for Chiana to convince herself the twin is illegitimate because she'd just cried and held a little funereal for D'Argo's twin. Edgley's performance at the end of the episode is vulnerable and chilling as Chiana dismisses D'Argo's description of how exact his twin was. 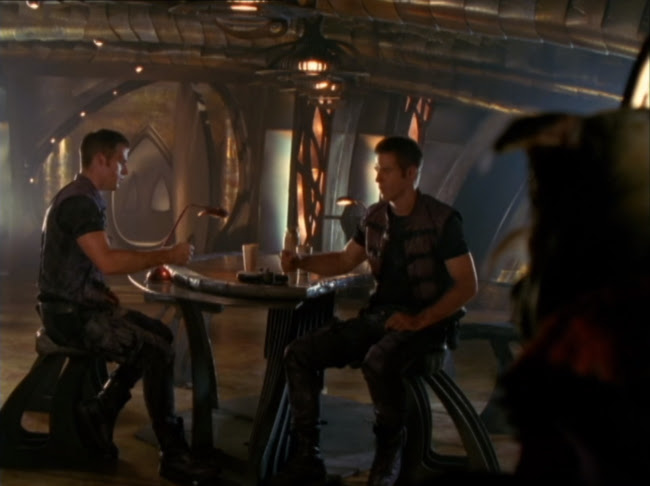 Crichton, who's been made more callous by his experiences (Chiana, as experienced as she is, is comparatively a child) brushes things off a little easier. He's even a little mean when he tries to get this Leviathan's Pilot (Sean Masterson) to cooperate in repairing the ship. So it's fitting that the episode ends with Crichton being twinned and his twin being the only one of the twins who survives. He's a manifestation of Crichton's unresolved internal issues as well as an interesting point for other issues throughout the season as it develops.