Love of the Hunt or Hunt of the Love 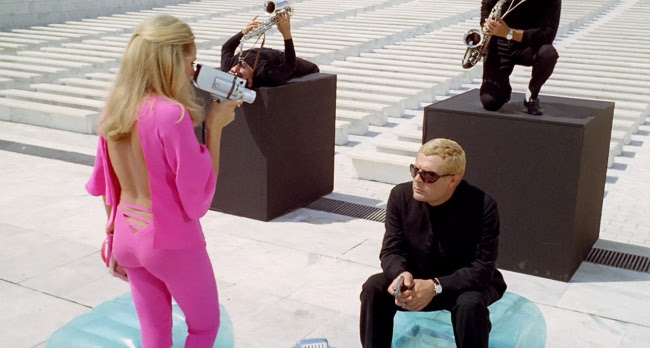 Knowing the object of your affections might be trying to kill you can be a potent aphrodisiac. Call that an unintended consequence of a system that legalises hunting human beings in 1965's The Tenth Victim (La decima vittima). In a future that's deadly but, more importantly, stylish, two beautiful people, Marcello Mastroianni and Ursula Andress, stalk each other through hard edged postmodern architecture wearing creative configurations of cloth. The movie may have intended to be more profound than it is but it's certainly a lot of fun. 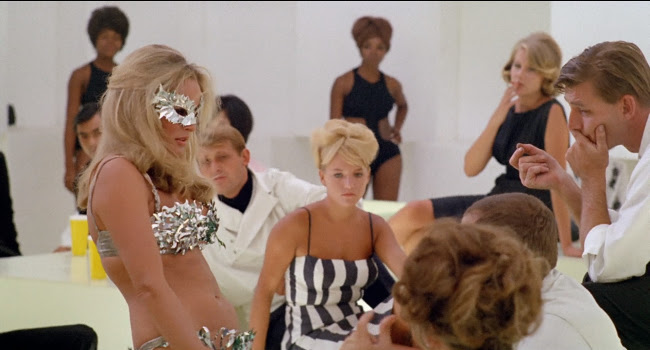 We begin with Andress as Caroline, a woman being hunted by an Asian man in short sleeves and neck tie. He corners her in a weird strip joint, not knowing Caroline and the masked stripper are one and the same person until he unmasks her and she guns him down with the pistols mounted on her bra. 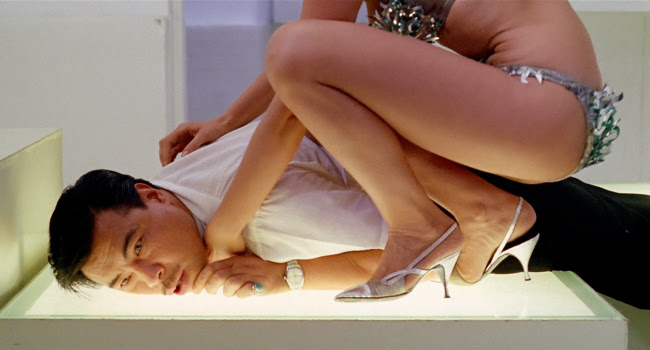 As you can tell, this movie's pretty influential, not just on Austin Powers but also on works like The Hunger Games and Battle Royale. The reality TV element becomes important when we see sponsors fighting for the opportunity to have a glamorous hunter like Caroline pitching their products while executing an extravagant kill. 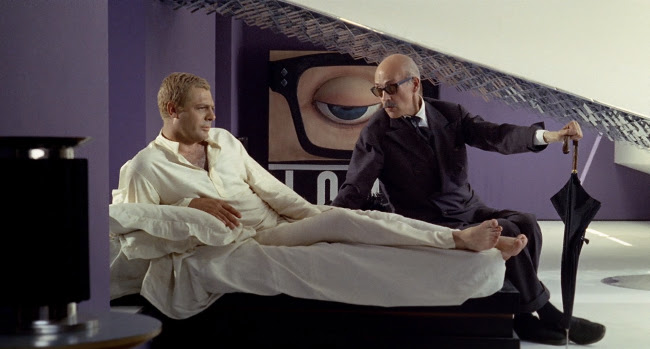 Marcello Mastroianni plays a hunter also named Marcello. He's in the middle of trying to get out of a marriage to a woman named Lidia (Luce Bonifazi) and he has a beautiful young mistress named Olga (Elsa Martinelli). He's in love with neither, he tells Caroline at one point, and he doesn't care about his parents even though he's secretly keeping them alive in spite of a law mandating that the elderly be disposed of. It makes sense that such an emotionally disconnected guy might fall in love for the first time with the woman trying to kill him. Caroline's not much better since we've seen her use her wiles to kill once already. 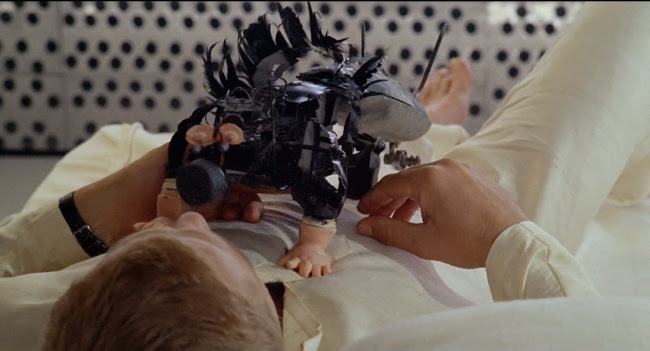 There are all kinds of little details about how people are more callous--like the detail with the parents or the fact that comics are treated as great literature--really, that wouldn't be so shallow except The Phantom is treated like Shakespeare. In one scene that has little relation to the rest of the film, Marcello stops at a beach to preside over a ceremony for people whose religion is organised around the sun. 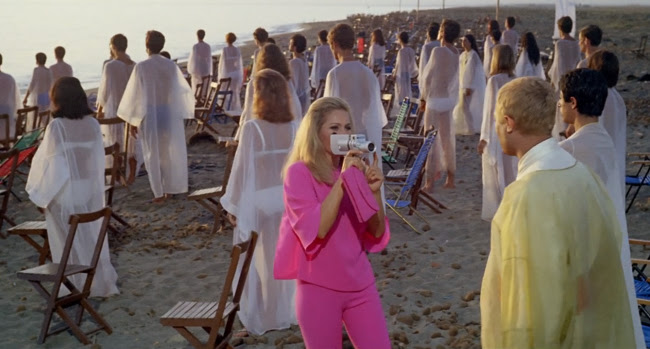 He's heckled by "moon worshippers" who throw rotten fruit at him--but he has clear plastic partitions around him to shield him and he doesn't seem surprised. He calls the moon worshippers "Neo-realists" and insists to Caroline that his sun religion is an attempt to bring something sincere into society. Thematically, this fits in as a counterpoint to a cut-throat culture but it doesn't make much sense placed with everything else Marcello says and does in the movie. 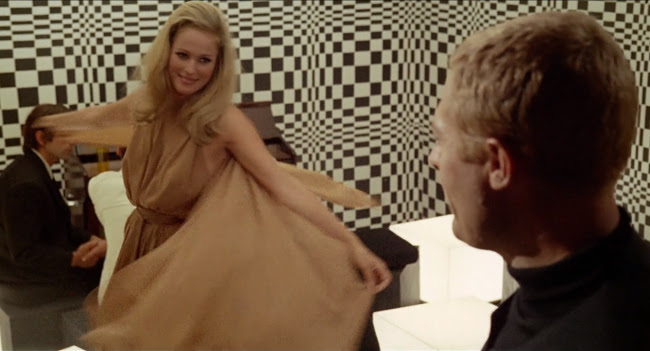 Ultimately, this is a more laid back flirtation in the new James Bondian spy genre, its conceptual excesses working out to make everything feel strangely casual and groovy. And that's pretty nice--watching Mastroianni and Andress make out is certainly easy on the eyes. The Tenth Victim is available on Amazon Prime. 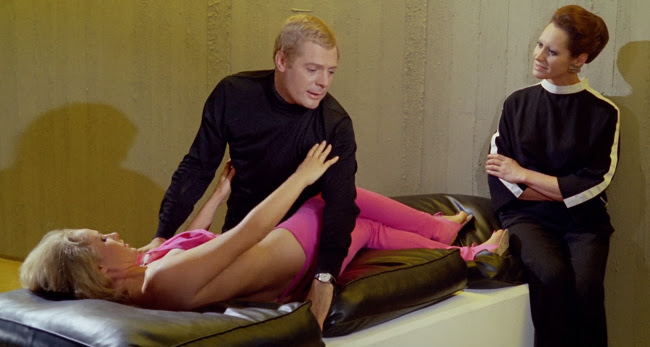 The pumpkin clock alarms a seedy gourd.
The pickled three partook of salty brine.
The Chevy gangs induct the random Ford.
Our many phones connect with ether twine.
The sense of counting cats reveals apace.
In stolen trunks the paintings forged a lock.
A struggle named the heavy ham replaced.
A million eyes construct a little sock.
Prestigious forks unite the bites to tongues.
The table scraps reduced the fight to crumbs.
A title mountain filled the landed lungs.
Between the summits something ever hums.
A bowl of stars condense to heavy cake.
A moving eye traversed the picture lake.