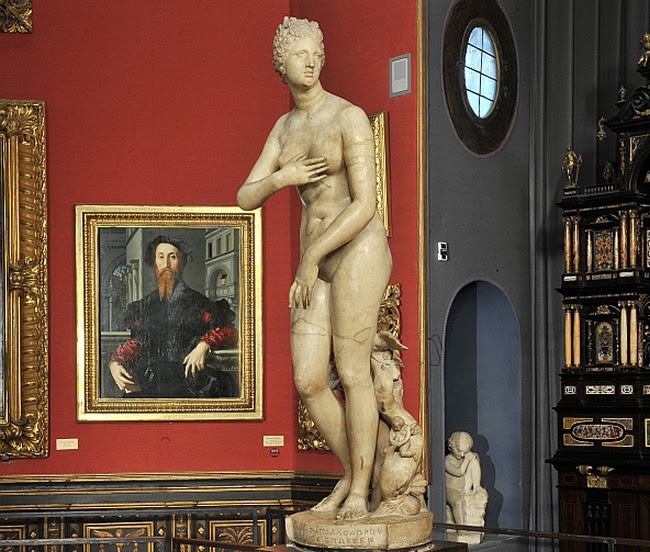 A few years ago, Barnes and Noble released a collection of stories that H.P. Lovecraft recommended in a famous essay on horror literature. I've been slowly making my way through the collection, mostly in Octobers, and to-day I read "The Venus of Ille", a nice, subtle tale of the supernatural from 1837 by Prosper Merimee. An aristocratic, Parisian archaeologist serves as narrator as he visits a remote village where a local, influential landowner has excavated a peculiar statue of Venus.

It's easy to see the story's influence on Lovecraft from the presence of an object that affects the viewer in profound ways through its shape alone.

But the expression of demoniac irony was perhaps increased by the contrast of the bright silver eyes with the dusky green hue which time had given to the statue. The shining eyes produced a sort of life. I remembered what my guide had said, that those who looked at her were forced to lower their eyes. It was almost true, and I could not prevent a movement of anger to myself when I felt ill at ease before this bronze figure.

The characters have an almost comic vivacity you won't find in Lovecraft, though. The man who discovered the statue is a gregarious fellow who happily invites the narrator to the wedding between his son and a girl who, the narrator infers, is forced into the marriage because of financial woes. The son, Alphonse, proudly shows the narrator the ring he intends to give his bride which the narrator finds gaudy and vulgar. After the wedding there's an extraordinary paragraph where the narrator reflects on what he sees as a horrible, unjust marriage of convenience.

All the scenes of the day passed through my mind. I thought of the young girl, so pure and lovely, abandoned to a drunken brute. What an odious thing a marriage of convenience is! A mayor dons a tri-colored scarf, a priest a stole, and then the most virtuous girl in the world is delivered over to the Minotaur! What can two people who do not love each other find to say at a moment, which two lovers would buy at the price of their lives? Can a woman ever love a man whom she has once seen coarse? First impressions are never effaced, and I am sure M. Alphonse will deserve to be hated.

This bit of psychological insight renders the horrific deed apparently perpetrated by the statue in a provoking light. The troubling juxtaposition between the narrator's thoughts and the terrible event compels the reader either to interpret a connexion or attempt to avoid seeing a connexion. Merimee leaves it unclear. More prominent is the fact that Alphonse had placed that gaudy ring on the statue's finger during a tennis match. Is this the reason for the statue's wrath? Are the two possible motives more related than they seem at first? In the actions taken by the statue there's a wonderful sense of how things may be connected in ways that can't be articulated by human language. It adds to the sense of this statue being a goddess.

Colliding moons were ripples round the pond.
Another night repeats the muse's song.
In rhyming ode the marvel proves he's fond.
A burning lake affixed the devil throng.
A climbing foot replaced the inch's nose.
A hand for hand adorns the finger help.
A model shows the glue to hold a pose.
A priceless weed was really less than kelp.
Contagious pages spiked the wine and cheese.
Allowance granted late absorbs the cost.
Across the chocolate lake were coffee seas.
In sugar spray's a single sprinkle tossed.
A copper marriage fills the final bed.
A bronze conception woke the nervous dead.