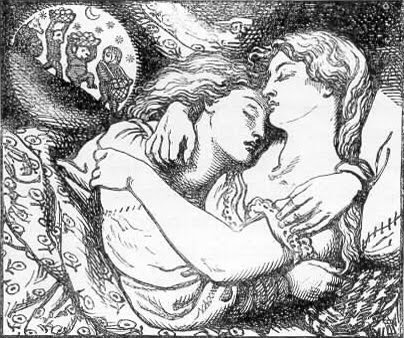 This was an auspicious day to let the juices of goblin fruit run down your chin. To-day was Christina Rossetti's birthday so I decided to read her most famous poem, 1862's Goblin Market, again. Written by a woman whose piety compelled her to reject a fiance because he converted to Catholicism, Goblin Market is nonetheless best known for being intensely, weirdly sexual. In the years since I first read the poem, my exposure to 19th century poetry has broadened considerably and having also read Tennyson and Keats and Arnold I find the poem even more extraordinarily sexual.

The story of two sisters who encounter goblin men selling fruit it describes how one, Laura, gives into temptation and rapturously devours their wares while the other sister, Lizzie, abstains.

When armchair art critics were recently jeering at Pre-Raphaelite paintings as being examples of the dreaded "Male Gaze", obviously Christina Rossetti was left out despite the fact that her brother, Dante Gabriel Rossetti, was one of those painters and Goblin Market certainly fit in with the philosophy behind Pre-Raphaelite aesthetics. Arguably the conclusion of the poem is a celebration of lesbian love though whether this was Christina Rossetti's intention isn't clear. Some might say it's obvious but, then, people have been arguing for centuries over whether Milton was of the Devil's party or not.

What if Rossetti really didn't mean anything sexual or to allude to lesbianism?

She cried 'Laura,' up the garden,
'Did you miss me?
Come and kiss me.
Never mind my bruises,
Hug me, kiss me, suck my juices
Squeezed from goblin fruits for you,
Goblin pulp and goblin dew.
Eat me, drink me, love me;
Laura, make much of me:
For your sake I have braved the glen
And had to do with goblin merchant men.'

In boxes flattened screens appear to glow.
Connected tubes present the life to eyes.
A normal stage deserved a seasoned show.
Contestants quickly eat a thousand pies.
A turtle ran from east to north and west.
The timing turned a Shell to Mobil gas.
The lead determines twelve were running best.
A hundred cars were stuck between the pass.
An awkward paint would clash with ev'ry wall.
The cursor chose a phone beside the beat.
Behold as millions crushed the blackened mall.
A final day revealed a field of peat.
The market stays in goblin lights to-day.
The choicest fruit in weirdest ways decayed.