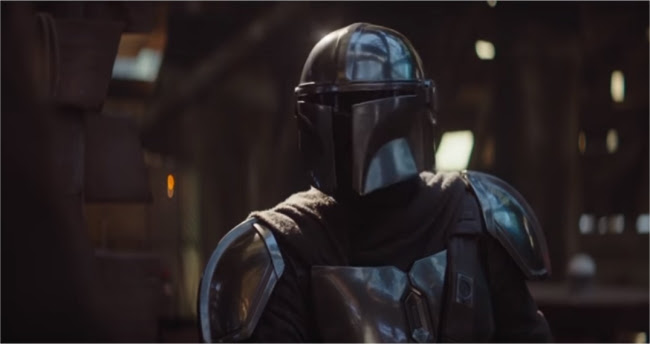 Many people know George Lucas was influenced by Akira Kurosawa when creating Star Wars so it's certainly not strange for Friday's episode of The Mandalorian to have been partly based on Seven Samurai. It's pretty far from strange, in fact, since Clone Wars also had a Seven Samurai episode ("Bounty Hunters"). In Mandalorian's manifestation, it feels a bit like a copy of a copy of a copy; a bit washed out and rote. This was the first episode of The Mandalorian to feel much more like television than like a movie.

The first Star Wars movie actually took most of its plot from Kurosawa's The Hidden Fortress but Seven Samurai is the better known film. The story of a farm village routinely ravaged by bandits every harvest, the desperate and fed up villagers finally send a few of their own off to town to find "hungry Samurai", Samurai willing to stoop to helping farmers in exchange for all the rice they can eat. In the Clone Wars episode, the Samurai are replaced with Anakin, Ahsoka, and Obi-wan and a group of bounty hunters while The Mandalorian reduces the number to two--the Mandalorian (Pedro Pascal) and the newly introduced bounty hunter Cara Dune played by MMA fighter Gina Carano. 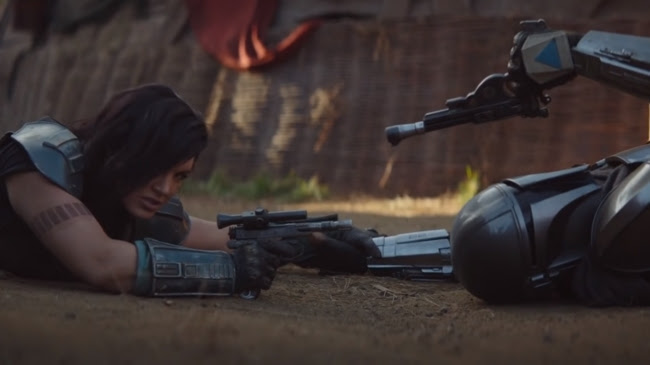 I've been saying for years this is how Hollywood should cast female action stars--look to women who have succeeded in a profession that requires the reflexes and physique of fighters. The fight choreography when she encounters the Mandalorian the first time certainly confirms the viability of this idea. Unfortunately, Carano can't act. We can forgive this in Arnold Schwarzenegger because he's so weird and good natured. When it comes to dialogue, it seems like casting pulled Carano out of the nearest fast food joint.

But she's not the only part of this episode that comes off like flat soda. The farm village itself looks like a cheap Star Trek: The Next Generation set--or, more appropriately, like an Orville set. Maybe I'm spoiled because I've been watching Farscape so much lately but this is a point the makers of Mandalorian could take--Farscape was doing its best to look as good as a Star Wars film on a television budget.

Leaving aside the disappointing look of the production, though, there's a bigger problem in the writing and directing. Favreau may have gotten so carried away with the Seven Samurai reference he forgot to include important things for people who've never seen Seven Samurai like establishing motive for the bandits. Are the bandits stealing a harvest? Is it harvest season? It would be unfair to point out the story elements from the four hour movie lacking in the 41 minute episode but some things are crucial for establishing the tension.

The AT-ST, as a surrogate for the rifles introduced in Seven Samurai, is a nice touch--an unexpected technological edge the bandits have though the consequences aren't as dire for the heroes or as meaningful as a cultural comment.

A lot of the blame should probably go to director Bryce Dallas Howard for her work that abundantly suggests inexperience. Maybe Kathleen Kennedy is still working off the debt she owes Ron Howard for pinch hitting on Solo though I think Bryce Dallas Howard is also appearing later in the season. In any case, it's on the surface a puzzling choice for Disney to put an untested director on such an important series. I suspect they place great value in nepotism, though, and it's the cause of many of their most bafflingly bad decisions, like Jed Whedon on Agents of S.H.I.E.L.D.. I can only hope they'll finally learn their lesson and there won't be more episodes of The Mandalorian like this.

A careful spoon delivered fur to shapes.
Spaghetti spun in heated waves about.
Magicians change at will behind their capes.
A dinner served at dusk inspires doubt.
A double collar guides the scarf around.
Excessive soup engorged the bowl in stuff.
The broth and base in oil sure abounds.
A metal link attached the floppy cuff.
A painting spiralled small for bigger phones.
In numbers late and soon the papers turned.
Within the human bodies walked the bones.
In fires like a bed the sleepers burned.
The extras take the ravaged town for lunch.
Banana hands could grasp for ev'ry bunch.