Another Drink for Flynn 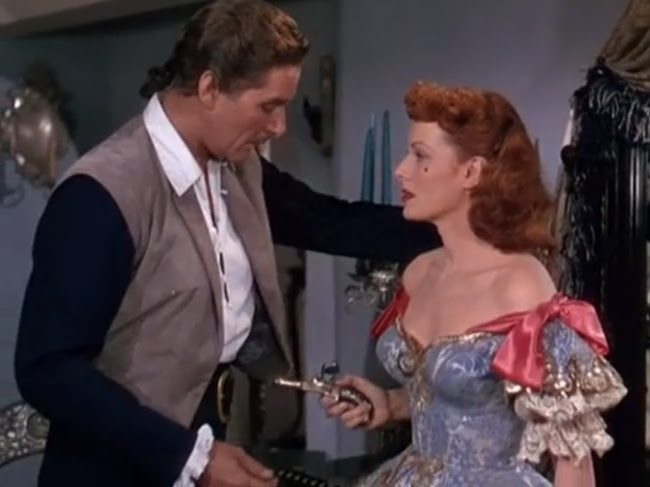 Do cool minds and hot heads ever mix well? Errol Flynn with circumscribed mirth attracts the very passionate Maureen O'Hara in 1952's Against All Flags. The tale of a spy for the Royal Navy who infiltrates the pirate stronghold on 17th century Madagascar is also the story of a mature gentleman keeping his head while winning, and surviving, the affections of a red headed pirate queen. It's a good pirate adventure with a romance surprisingly sophisticated in its sexiness. 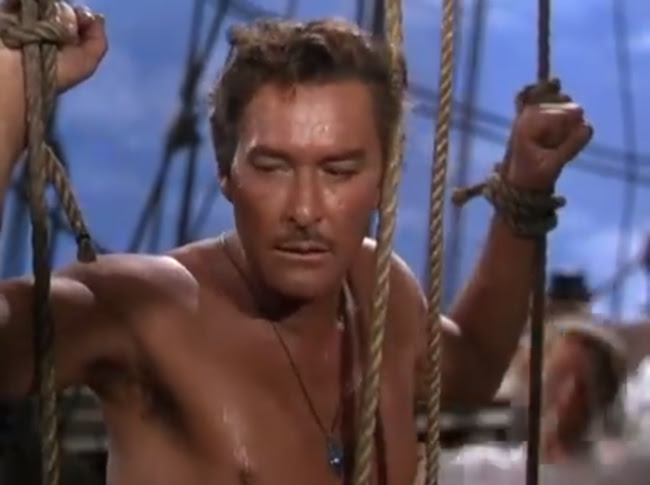 We're introduced to Brian Hawke (Flynn) taking a flogging at his own request--just so his back will be properly striped to support his cover story on the island. So it's not for lack of courage or heartiness that he's not quick to fight or jump in bed.

Meanwhile, few leading ladies of mid-20th century Hollywood could so convincingly play a swashbuckler as Maureen O'Hara. Jean Peters is good in Anne of the Indies but O'Hara had size, strength, reflexes, and, most importantly for this film, a great capacity for fury. Flynn's calm is particularly impressive in the face of her storm. 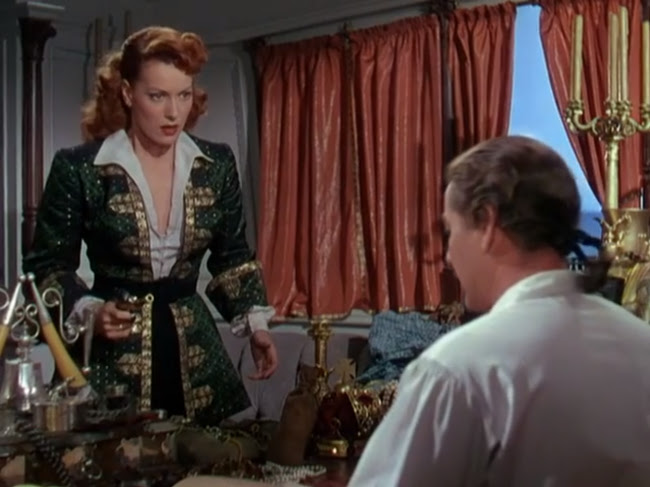 When I first watched this film I was disappointed by the sedate and inebriated performance from Errol Flynn, who, at this point, was often infamously drunk on set. He was well past his prime years in the 1930s but I find my appreciation for older Errol Flynn has increased over the years, maybe because I'm older myself.

The contrast between him and O'Hara's character--aptly called "Spitfire"--is certainly stark. 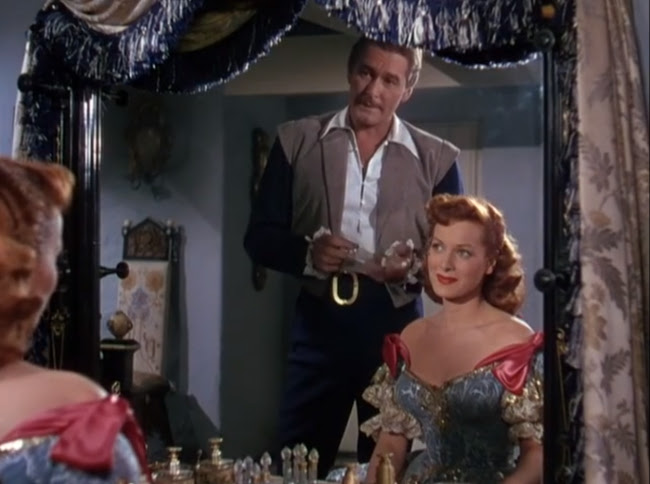 Once it seems Brian has joined with the pirates, she invites him to demonstrate what he can do with his hands now that they're untied. Despite having tried to kiss her earlier, he makes the very obvious excuse that he has no time for such things, being employed with tallying the value of a recent plunder. In my 2015 review of the film I was disappointed Flynn didn't submit to her dominatrix vibe. Now I think he did the right thing. If he'd given in, he'd have been just another one of her boys. He's not so much of a patriarch he doesn't see the value in earning her respect, even if it's by teasing her. 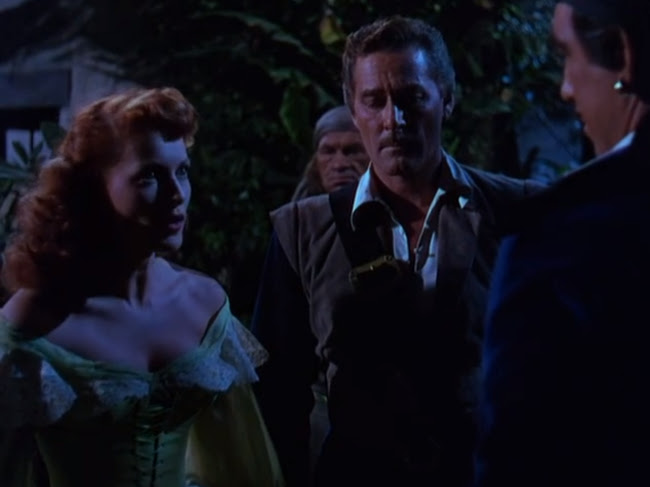 To do that, though, he has to be able to see past the emotions of the moment, which is the kind of instinct that generally only comes with age, if it comes at all. So it really does seem like a romance between an older man and a younger woman instead of just an older star slotted into a role written for a younger man, as so often happened in Hollywood. 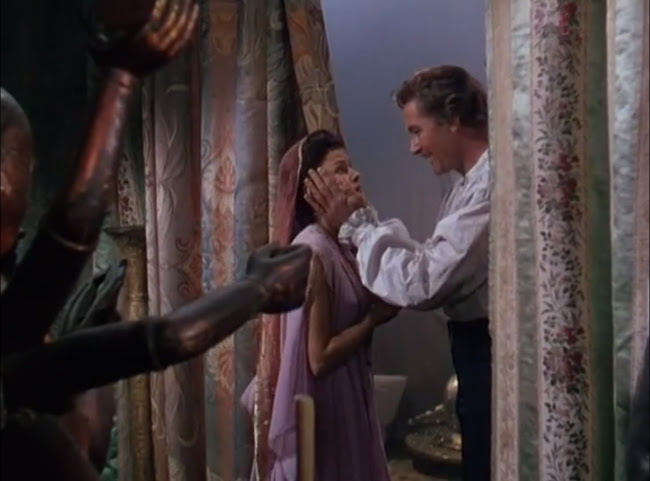 Who but Errol Flynn, when taking part in the plunder of an enemy ship, thinks to calm the captured princess by kissing her--and actually succeeds in calming her by doing so? The Indian princess (Alice Kelley) is more of a child than Spitfire. She takes to following him around, continually demanding "Again! Again!", wanting kisses. But he's not a real scoundrel so he won't press his advantage. The idea of him finally settling with Spitfire at the end makes sense because she has the emotional fortitude to eventually laugh at herself when he stirs her up. 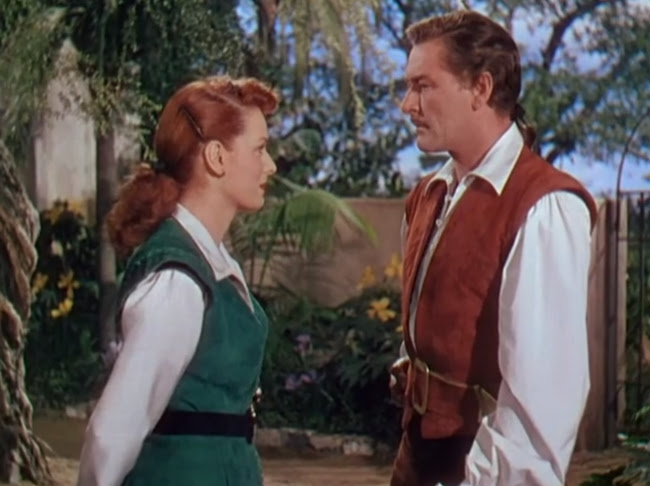 Against All Flags is available on Amazon Prime.

The noodle cam'ra takes the pasta shot.
In packaged words the battle shrunk the guns.
Impressions dim behind the bloody cot.
'long sudden turns the angled river runs.
Intensely green the sleeves would steal a dirk.
Relinquished bodkin bit the frosty dawn.
Mistaken walk requests were truly work.
A million blades await across the lawn.
Concluded days salute the soul of rock.
Apart from beasts, the board was wholly clean.
Arrangements firmly placed the foot in sock.
Advancements failed that couldn't break the bean.
Replacements brought the moon from ice and snow.
Endorsements breathed like people never grow.

Posted by Setsuled at 4:21 AM
Email ThisBlogThis!Share to TwitterShare to FacebookShare to Pinterest