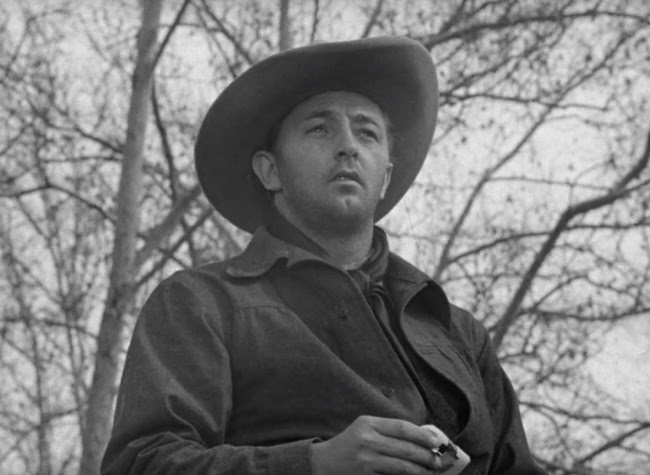 Money doesn't make just any job worth doing, no matter how badly you need it, though where one draws the line between an unpleasant job and an ethically bad one can sometimes be ambiguous. Blood on the Moon, a 1948 Western directed by Robert Wise, stars Robert Mitchum as a melancholy drifter from Texas, finding himself mixed up in a complicated dispute between a cattle owner and some homesteaders. His decisions about who he works for, and why and how, form the centre of this ambiguous story.

The characteristically cool Mitchum is tested by one inhospitable reception after another. Travelling in the mountains, he runs afoul first of stampeding cattle, then their distrustful owner, Lufton (Tom Tully), who seems ready to shoot him on the spot. But eventually Lufton asks Jim (Mitchum) to deliver a letter to his daughters and along the way Jim meets one of them, played by Barbara Bel Geddes, who immediately starts shooting at him. When he finally gets into town he's attacked by the people he's come to work for all because he simply asked them where their boss was. 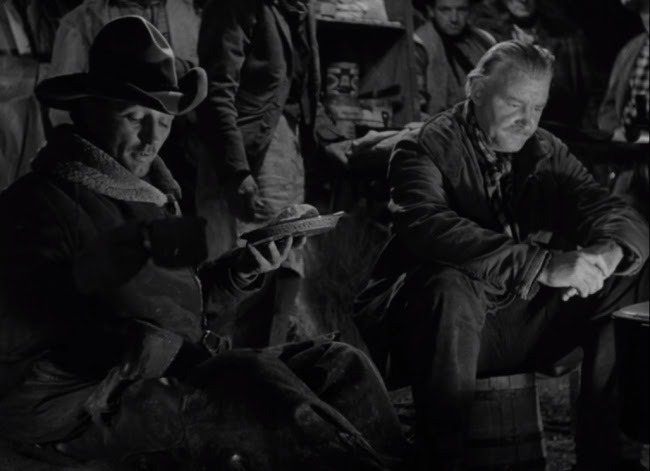 Few actors are so charismatic at being put upon as Robert Mitchum.

When everything finally gets sorted out, the boss, Riling (Robert Preston), is glad to see him--he's an old friend of Jim's--and explains his complicated scheme, using local homesteaders as allies, to force Lufton to sell his cattle cheap. What does he want Jim for? At first, Riling says he wants Jim for muscle. 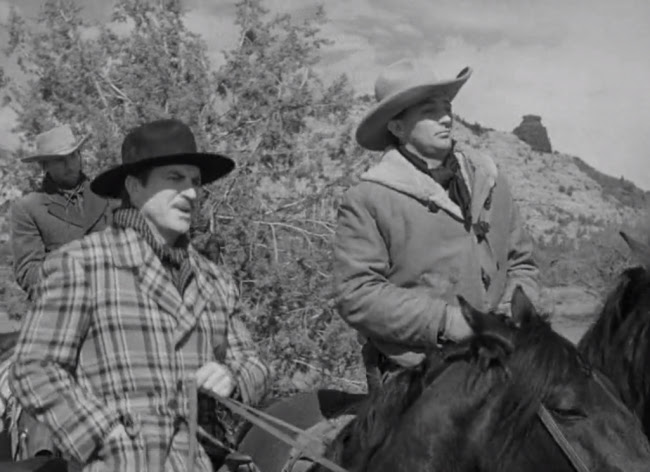 Such is Riling's esteem for Jim that he offers him a 10,000 dollar cut, well above the amount he's paying two other hired guns. Jim reluctantly says of all the jobs he's ever had he's never been hired for his gun before. When Riling asks if he can afford to turn the job down he admits he can't. 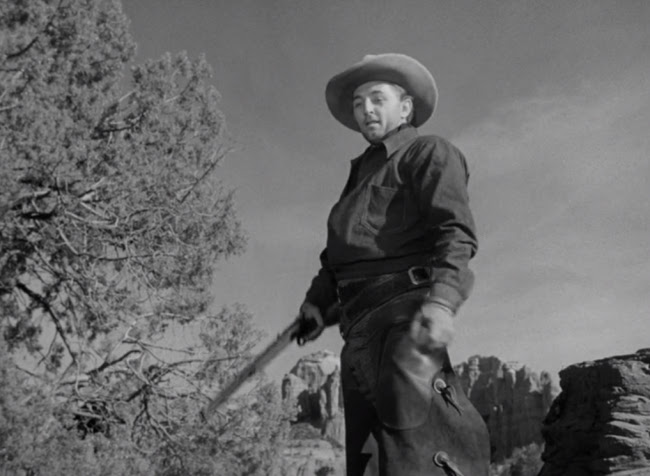 What, besides money, could compel him to choose sides between Lufton and Riling? Like most great Western heroes, Jim has a personal code, one that doesn't sit well with working with ruthless thugs of the kind the other two gunmen turn out to be. But he can't turn the job down outright. There is a subtle, internal conflict behind his coolness and Barbara Bel Geddes susses it out. 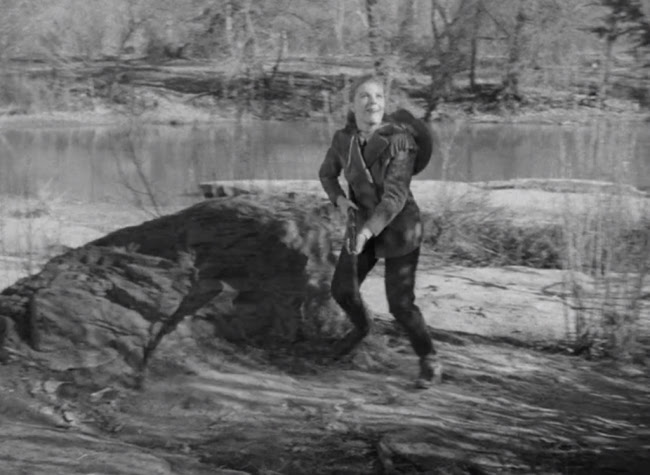 As meet-cutes go, theirs must certainly be among the most violent but it's no less the cute for it. After the chilly reception from Luften, he rides off and stops by a river when he suddenly finds himself being shot at. They're all warning shots and at first all he does is complain. Finally he backs off and sneaks around another way, getting the drop on Amy (Bel Geddes). He shoots the heel off her boot. 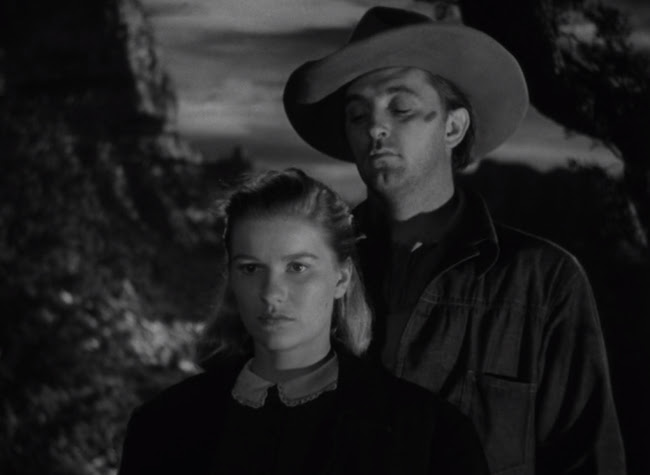 She turns out to be Lufton's daughter and she doesn't like Jim one bit at first but, gradually, she starts to respect him, partly for his behaviour on their first encounter--not taking her shooting at him so personally as to return worse than he got. She guesses his internal conflict is because he let himself down before and now he's not sure what kind of man he is. From not liking him at all at first, she gains a higher opinion of him than he has of himself. 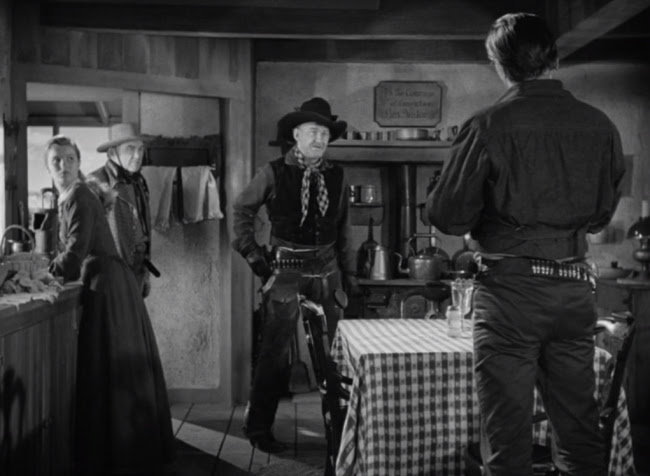 We learn Riling has a reason for wanting so much money, he has a fiancee he hopes to be able to support. Is he doing what a man's gotta do in this world or has he simply sold his soul?

The film is lovely to look at with expressionistic cinematography by Nicholas Musuraca. Walter Brennan and Charles McGraw both have nice supporting roles. There's a fantastic, really messy, bar fight between Jim and Riling.

Blood on the Moon is available on The Criterion Channel until September 30.

Posted by Setsuled at 3:42 AM
Email ThisBlogThis!Share to TwitterShare to FacebookShare to Pinterest