The Boy Without Age 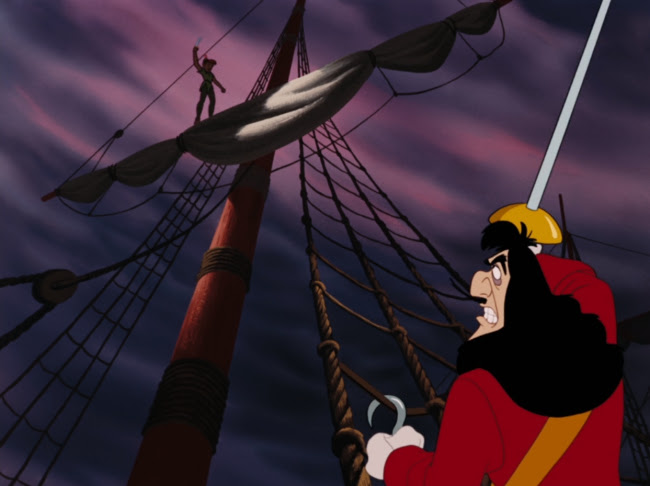 What does it mean never to grow up? A few writers and artists have pondered the question but perhaps the most famous example is the source material for Disney's 1953 animated film Peter Pan. Having a much tighter, more focused narrative vision than the studio's previous film, Alice in Wonderland, it nevertheless feels less focused than Cinderella. Changes to J.M. Barrie's original play and novel downplay the tragic elements of the story while also the romantic chemistry between Peter and Wendy. However, the film's design, animation, and performances are so perfectly suited to the story's characters and environment it would be the rare person who, in an honest spirit, didn't come away from it smiling. 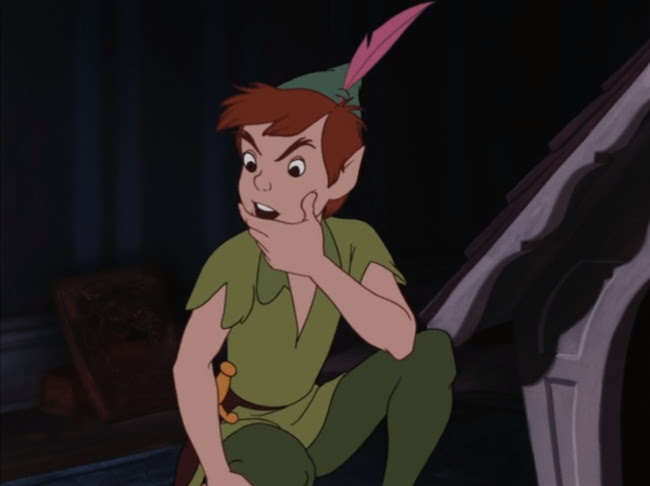 On one hand, it's perfectly natural for Disney to choose one of the most famous fantasies of all time for their next animated film. On the other hand, Peter Pan represents a move in the opposite direction from the themes underlying their previous animated films which stressed the importance, and even beauty, of growing up. Peter Pan is arguably the philosophical opposite of Pinocchio. Neverland is a much happier version of Pleasure Island, being what Pinocchio and the other children probably imagined Pleasure Island to be. But where in Pinocchio never growing up means becoming an ass, in Peter Pan it just means endless fun. Barrie's novel and stage play gave us something more complicated. 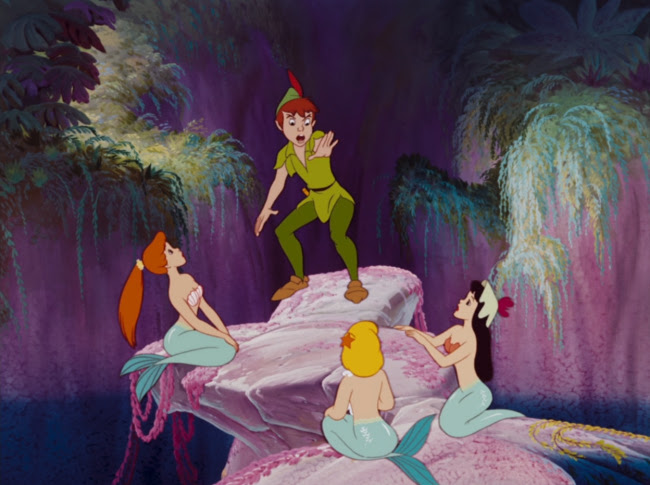 Barrie's story, or stories, considering the differences between the play and the novel, are much more even-handed in their presentation of the eternal child. It's amazing he can fly and his endless supply of pluck and innocence is really lovely. But he's also petty and quickly purges his mind of his own mistakes or displays of weakness--moments after crying he proclaims he's never cried in his life. He retains no memory of even his dearest friends--of course, memory is a key component for defining age. The significant exception to this failure to remember friends is Wendy and even with her he's not 100%. None of this is present in the Disney film so we have only Pan's good qualities. One wonders if this might have been different if the film had been made around the same time as Pinocchio. 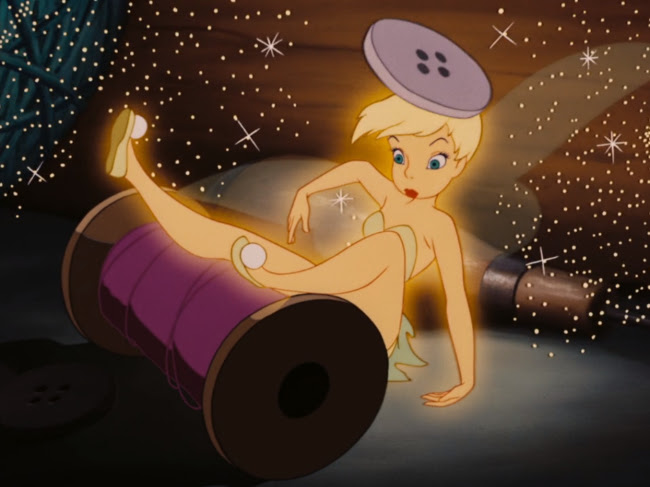 In one way, the film is almost faithful to Barrie's vision, and that's with Tinkerbell. She is the pretty, jealous, vain, and adorable little creature she is in the original with the added wonder of Disney's animation, some of their sexiest work for a female character. The climax of her story is deprived of the same level of sacrifice it has in the source material, which is a real shame, because with the way she's so brilliantly animated her choice to take the poison for Peter would've been absolutely heartbreaking. And even better if she never consented to do a kind thing for Wendy when Peter wasn't watching. 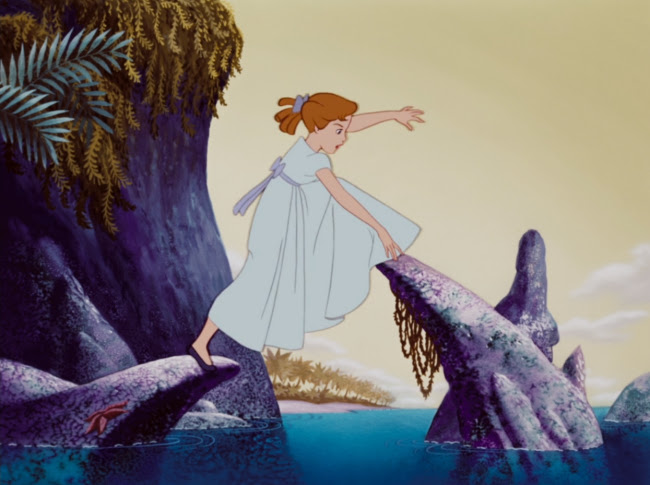 Poor Wendy doesn't fare as well as Tink. Without the lovely kiss scene at the beginning or Peter's uncharacteristic retention of her memory at the end she becomes just an annoying scold. She's there only to run behind Peter, telling him not to do whatever it is he's doing.

Her voice is Kathryn Beaumont, the same girl who voiced Alice, and she also shot live action reference footage for both films, giving a charming performance. But where in Alice she was shortchanged by a lack of focus on her character's issues, here she's cheated of nuance. She plays mother to Peter, her brothers, and the Lost Boys as she does in the source material but she has none of the more charming, innocent, childlike moments like her "medicine" which is just water in a bottle or her accidentally letting the boys nap on a rock too long because all she's learned so far about outings is the time table. 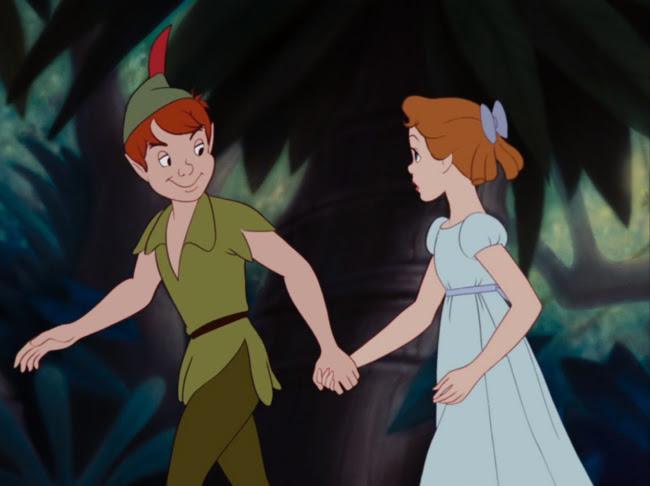 I'm reminded of Dungeons and Dragons and role playing games in general. Time and time again in RP I've seen boys instinctively look to the one or two female players for permission, to guide them on moral limits. And the girls, in an instinctive response, play minders, setting down boundaries and rules of conduct. So it is with Wendy, who arbitrarily comes up with bed times and meal times for the boys which they all instinctively seem to feel a need for. 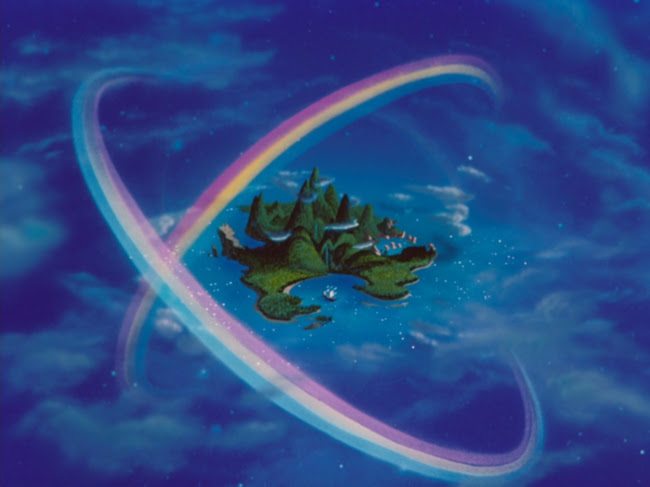 Neverland is quite a bit like a Dungeons and Dragons campaign setting. Where Dragonlance or Forgotten Realms borrowed elements from the Middle Ages while breezing past elements in danger of being boring, like economy and agriculture, Neverland presents aspects of the kinds of stories that might have inspired Edwardian English boys with little or no logical consistency. A dash of Treasure Island, a spot of King Solomon's Mines, a little Robinson Crusoe. On this little island are some of the more exciting figures of exotic, overseas adventures, pirates and Indians, engaged in endless, meaningless adventures, battles, kidnappings, and ambushes. These distant lands and people couldn't possibly be realised in the fullness distinctive of real people with just the resources an Edwardian boy has at hand so the child's imagination fills in the blanks. This kind of fantasy can be really terrific. Films like The Thief of Bagdad have a peculiar charm of their own that doesn't exactly belong to Britain or to Bagdad. 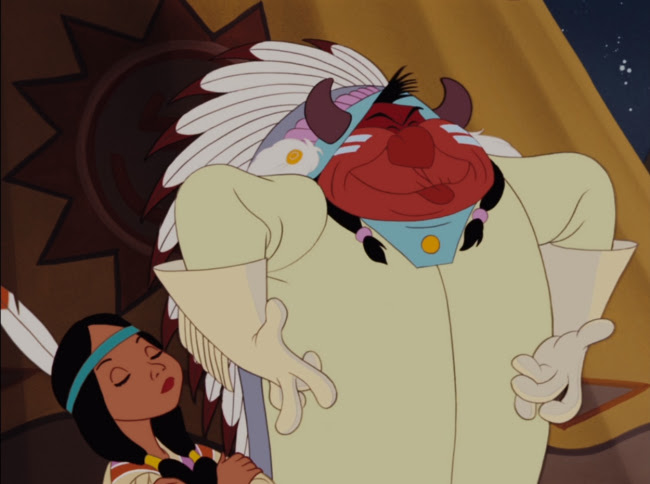 That said, the "What Made the Red Man Red" musical sequence in the Disney film is certainly a low point. It's more of an extended joke based on 1950s stereotypes of American Indians than the more innocent conception in the source material. Tiger Lily is prettily designed and animated, though. 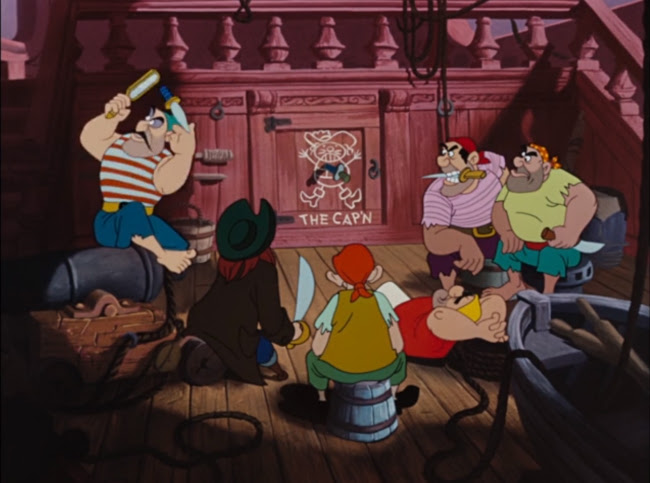 Coming off significantly better are the pirates. Disney always did pirates well in the 1950s. The 1950 Treasure Island remains my favourite pirate movie. They're colourful not just visually but in terms of personality and design, too. Hans Conried as the voice of Captain Hook creates a definitive take on the character along with his lanky design. As was traditional in the stage production, Conreid also voices the father of Wendy and her brothers. But the film lacks enough of the original story's actual ruminations on the differences between adulthood and childhood to make this meaningful. Pan is voiced by Bobby Driscoll, Jim Hawkins from Treasure Island, though his voice had dropped by the time of Peter Pan, making the character seem more like a teenager. He gives a better performance than in his live action roles, though. 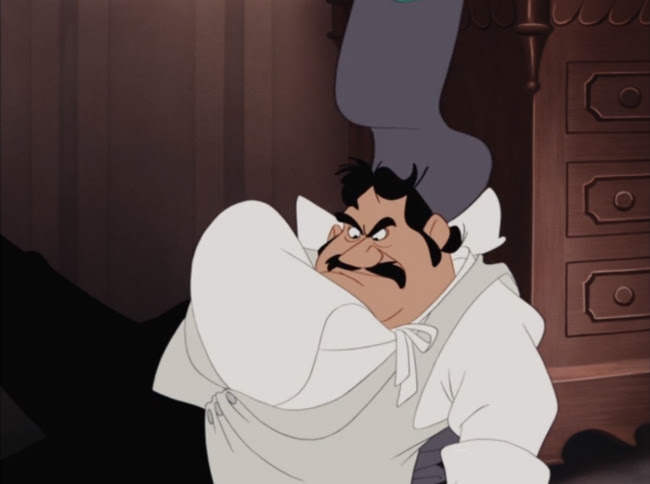 Barrie's novel contains material not in the play including a tedious and sentimental sequence involving Wendy's parents. I don't necessarily mind sentimentality but it's a bit too much time to spend on characters who don't really figure into the meat of the story. But the end of the book, dealing with the tragedy of Peter's eternal boyhood and Wendy's inevitable transformation into an adult, is powerful stuff. The film is wonderful but, like Alice in Wonderland, falls well short of the original.

Posted by Setsuled at 4:40 AM
Email ThisBlogThis!Share to TwitterShare to FacebookShare to Pinterest