Various Places for Masks and Doctors 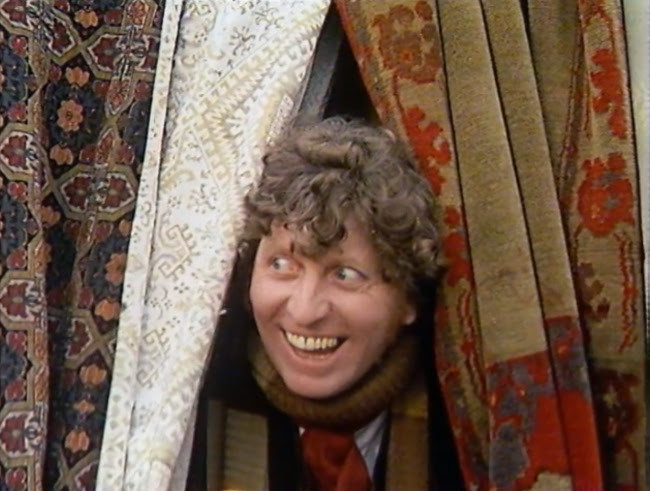 The Masque of Mandragora is nearly perfect but deeply flawed. The 1976 Doctor Who serial has very good performances, terrific atmosphere, and uncommonly good direction. But, although many conceptual elements are wonderful, the writing is disappointing.

The serial opens with a nice, amusing conversational scene in the TARDIS introducing a temporary, alternate console room. 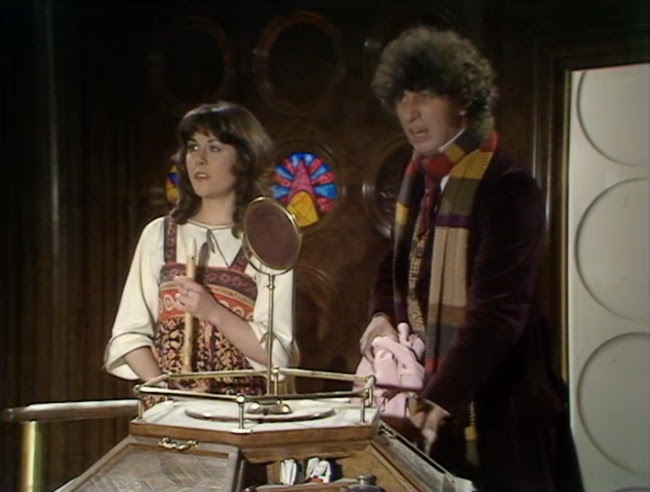 It actually doesn't look so different to some of the modern Who console rooms though the lack of a column in the middle to move up and down seems like an oversight.

Soon they run across a sinister spatial phenomenon that leads to "Mandragora energy" hitching a ride on the TARDIS and the Doctor (Tom Baker) unknowingly taking it to 15th century Italy. The atmosphere quickly starts to feel nicely classical. I love the shot of Sarah Jane (Elisabeth Sladen) picking a persimmon looking like a Pre-Raphaelite painting. 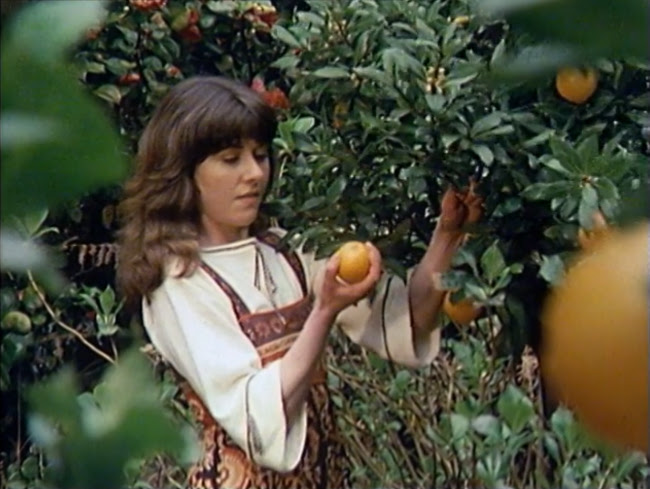 She calls them oranges but she bites right into it so I'm assuming it was really a persimmon.

Sarah Jane often seems dissatisfied in this story. The wiki says Elisabeth Sladen stayed on an additional seven months past her originally intended departure from the show because she wanted to film this story yet there are a number of moments where she seems chafe at how Sarah Jane is basically a damsel in distress for the whole serial. When the Doctor is making calculations in his head and says aloud, "17 from 60," she automatically says, "43," which seems improvised. The serial is also famous for the scene where Sarah Jane questions her ability to understand Italian to which the Doctor gives one of the old "I'll explain later"s. A later scene has him claim that he knew she was hypnotised by the cultists because she'd asked this question that she'd never asked before. Surely being hypnotised would make her less capable of independent thought, not more? It makes me wonder if Sladen had improvised the question.

Things feel more Shakespearean in the city where a ruthless Count (Jon Laurimore) is trying to steal the throne from the rightful heir, Giuliano (Gareth Armstrong). Giuliano's friend, Marco, is played by Tim Pigott-Smith who looks much as he did playing Hotspur in The BBC Television Shakespeare's production of "Henry IV: Part I" from around that time. 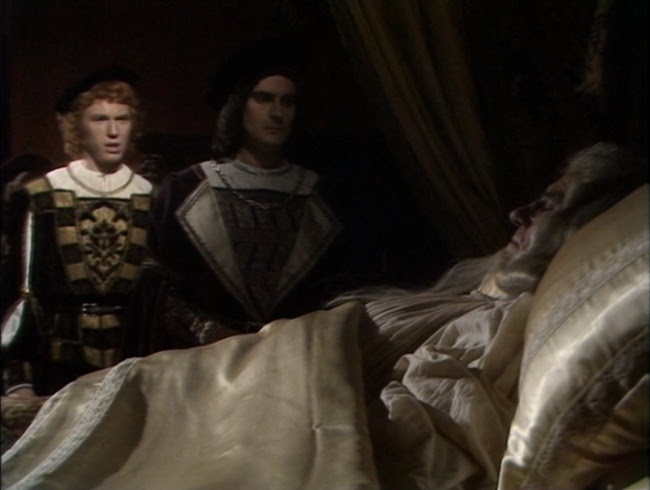 I suspect many of the costumes came from The BBC Television Shakespeare, too, although the TARDIS wiki notes a few of the costumes actually come from two different Romeo and Juliet feature films from the 60s. In any case, Shakespeare definitely hangs over every scene, and perhaps it's the comparison that makes the writing so disappointing. 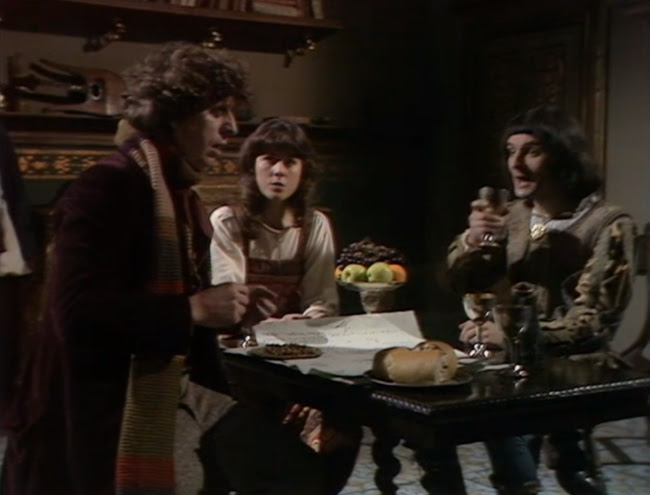 We're never told why the Count has so much support among the palace guard or why Giuliano doesn't seem to have any, an omission that becomes a bigger problem when the same guards chasing the protagonists seem ready to switch allegiances at a moment's notice. For a story about court intrigue, the nature of the political machinations is too often vague.

But I can forgive the serial this for all of its good points. Turning in a memorably creepy performance as the Count's seer, Norman Jones is deep voiced and maniacal as he intones the will of Mandragora. He and his cultists in their masks are wonderfully creepy. 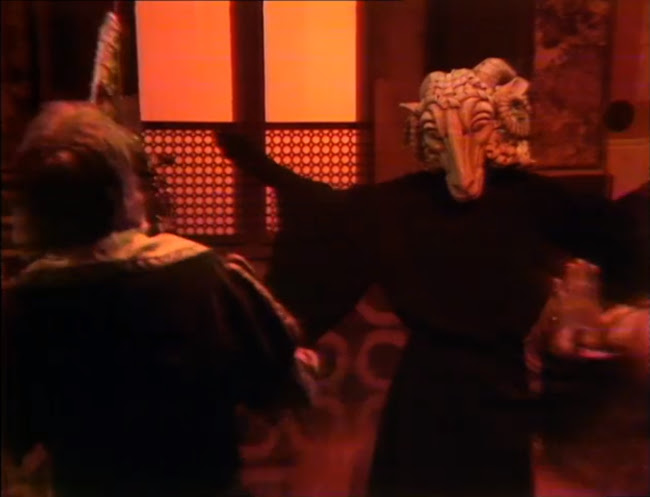 Even creepier are the masks at the masque. It's like Eyes Wide Shut 23 years early.

There are a lot of dynamic shots of the Doctor in action scenes I really like. When he escapes execution in the second episode he runs past some guards examining a corpse burned by Mandragora and doesn't notice them. And then there's some nice cat and mouse stuff in a market. It really is great to watch.

Posted by Setsuled at 10:48 PM
Email ThisBlogThis!Share to TwitterShare to FacebookShare to Pinterest