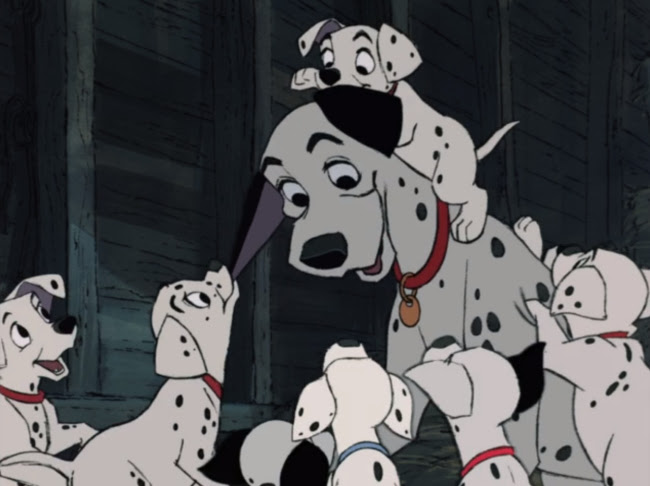 Disney went back to the dogs in 1961 with One Hundred and One Dalmatians, a lighter, significantly cheaper production than its immediate predecessor and a far greater success at the box office. Based on a 1956 novel by Dodie Smith first published in serialised form in Women's Day, its story involving marriage, motherhood, and fashion certainly feels as though it would be at home in the pages of a women's magazine and, although Disney's adaptation makes big changes to the story, its contemporary vibe stands in striking contrast to earlier Disney animated films, even Lady and the Tramp. The warmth and casual sense of awkward humanity in the film make it amiable and accessible though it also ends up feeling a bit smaller. Lacking the sense of majesty of previous Disney films, it feels more like a tasty snack than a full course meal. When added to this is the return to a 4:3 aspect ratio after the widescreen visuals of Lady and the Tramp and Sleeping Beauty, it feels more like television than cinema. But the film's success guaranteed many aspects of its production would be a model for animated films moving forward and one has the distinct feeling, when watching it, of one era ending and another, for better or, many would argue, very much for worse, beginning.

Rod Taylor of The Birds and Dark of the Sun stars as Pongo whose name, we're told in the novel, was a traditional Romani name for dalmatians. Two dogs in the book are condensed into one (voiced by Cate Bauer) to make Perdita, a name taken from Shakespeare's The Winter's Tale. Perdita in Winter's Tale is a princess raised in exile by commoners. In Dodie Smith's novel, this made sense because its Perdita is not the mate of Pongo, instead a starving, abandoned dog who serves as wet nurse for the fifteen puppies born to Missis, Pongo's mate in the book. Smith writes Missis as a Paragon of the supposedly desirable, dim-witted '50s housewife who runs on emotions. She lacks the intelligence to tell left from right. When Pongo and another dog try to explain left and right to her again and again, Smith describes when they finally give up and laughing, "in a very masculine way." Somehow I don't find it surprising to see this kind of characterisation in a women's magazine. It makes sense that women in the 50s would fantasise about being inferior to men the way many men fantasise about being inferior to women to-day. I'm glad Disney decided to leave this stuff out, even if it does mean they had to remove the interesting character of the book's Perdita. 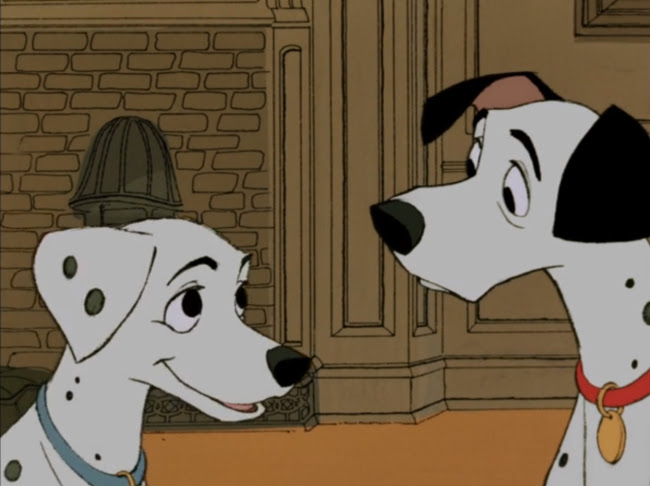 In other ways, even in the original novel, One Hundred and One Dalmatians may be seen as the progressive answer to the conservative Lady and the Tramp. The refusal of the adult dogs and humans to sell or allow to be killed even one of the overabundant quantity of puppies suggests a belief in innate equality but both the film and the book present the belief that exceptional individuals should be rewarded with exceptional privilege. The human male, Roger Radcliffe (Ben Wright)--Dearly in the book--is a man distinguished by great accomplishment. In the book, he's an accounting genius, exempt from paying taxes because he single-handedly solved the government's debt. In the film, he has the more cinematic talent for songwriting and is responsible for the film's devilishly catchy number, "Cruella De Vil". 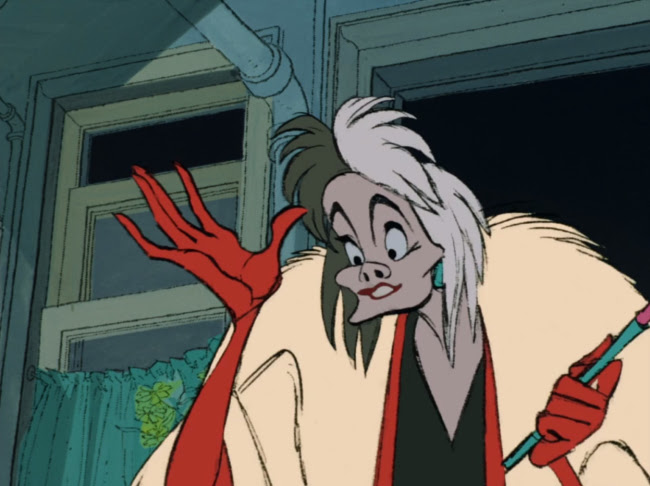 It's impressive Disney followed up Maleficent in Sleeping Beauty with another of the greatest villains in film history. In this case, the source material could be credited with much of what made Cruella (Betty Lou Gerson). Smith's version is even more Satanic and the inside of her home is described as different rooms of all red, black, or white marble, which made me think of The Masque of the Red Death. But the animators and character designers at Disney certainly brought a lot to the table with her jutting bones and heavy, swirling, fur coat. 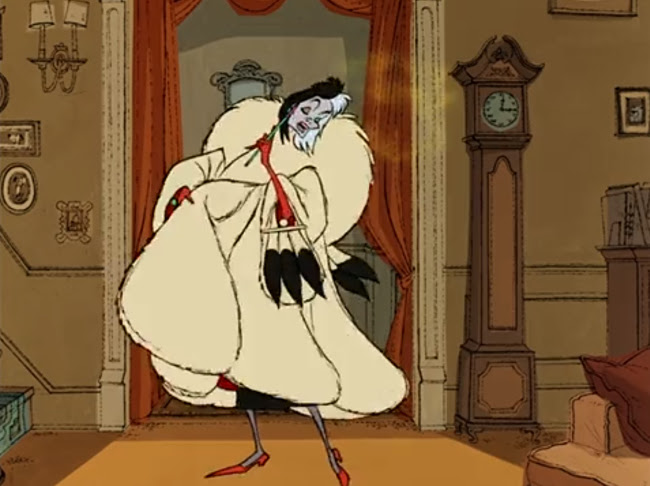 The humans are much more prominent characters in the film and one of the more charming moments is Roger's teasing performance of the song he's written, The jazzy number, along with the tendency for colours to spill outside the lines in the backgrounds, further contribute to the sense of the contemporary in the film. This is the first truly postmodern Disney film. 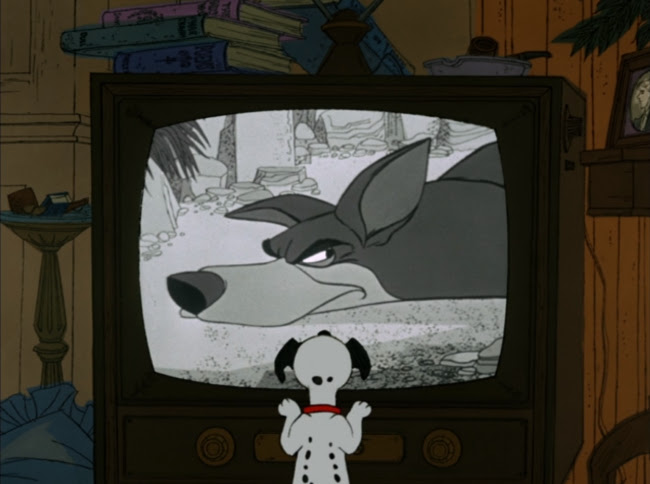 The late '50s and early '60s are when postmodernism really started to exert itself and Disney movies are far from the only ones that showed an old studio trying to incorporate the shift in avant garde, and increasingly in popular, media. Postmodern art is art that references its nature as artwork to achieve its statement or convey its ideas. So, really, you can find examples predating the time considered to be its birth--Knight of the Burning Pestle (1607) or Tristram Shandy (1767) are both examples and Disney's own short, "All the Cats Join In", from Make Mine Music (1946), in which an animated brush rendered moving characters before the viewer's eyes, could be seen as examples. With the French New Wave films like Breathless and Vivre sa vie taking postmodernism to new levels in film on a fraction of a Hollywood budget while cinema was also losing ground to television, it was to postmodernism Hollywood was turning more and more with varying degrees of success in films like Tom Jones or Paris When it Sizzles. 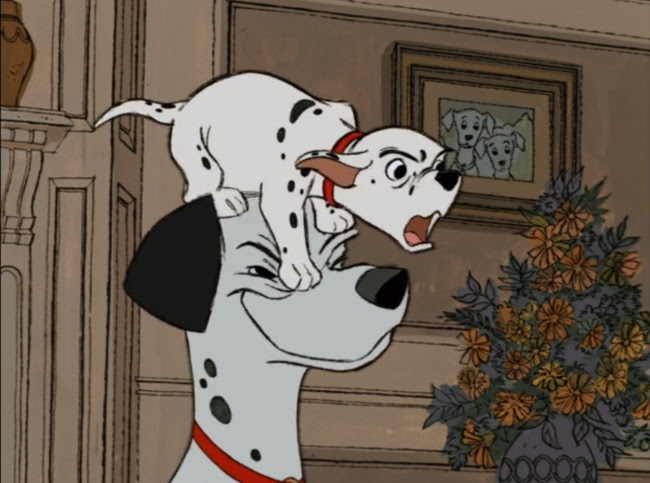 What made One Hundred and One Dalmatians different from "All the Cats Join In" was that its elements of postmodernism were necessitated by budget and trend. After Sleeping Beauty failed to make money, the time for intricate, detailed, grandiose fairy tales was over. One Hundred and One Dalmatians is a story of comparatively ordinary characters and its animation was produced via a substantially cheaper process using Xerox to eliminate the need to ink the animators' pencil drawings. A side effect of this method is that many of the rough guiding lines showed through in the finished film. 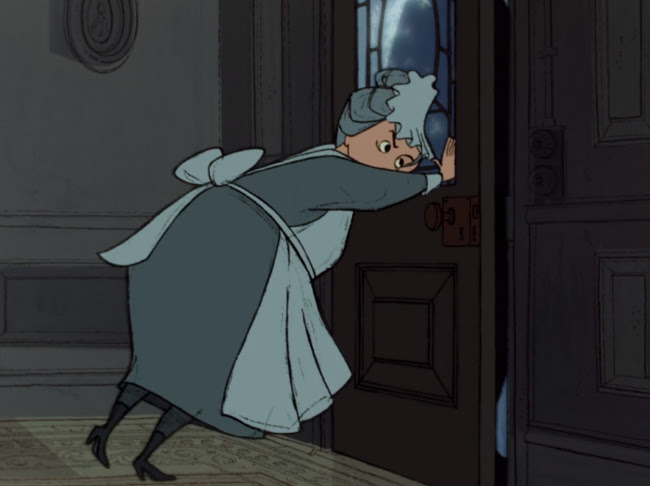 The technique also didn't hold up well when zoomed in on, resulting in some dogs, particularly shaggier ones, having dark, clumpy contours. 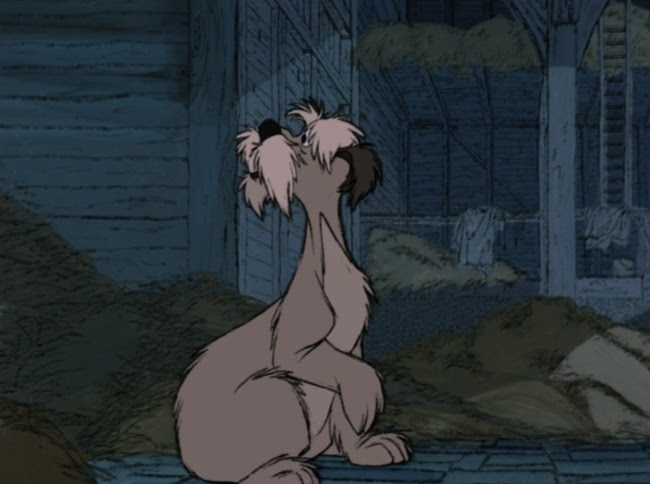 Backgrounds were also done in the same process for unity of style. Though that wouldn't explain why some backgrounds look as unfinished as they do. 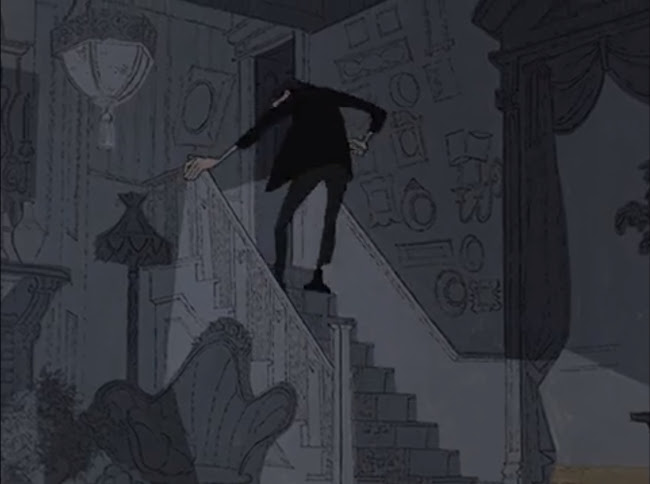 But it was all okay because of postmodernism, because now the seams were supposed to show. I used not to like postmodernism, except in comedy. Usually I thought it was tediously redundant. I thought movies like Jules and Jim and Pierrot le Fou endured in spite of, rather than because of, their postmodernism. I still think those films succeed more for their emotional cores than for their New Wave gimmicks but in recent years I've come to realise there are widespread deficiencies in the capacity for critical thought among people who graduated from college in the past ten years or so. Now I think many young people would probably benefit from exposure to scenes like the one in Vivre sa vie when Godard randomly cut out the score, or the fourth wall breaking in Une femme est une femme. Things like that elegantly demonstrate to the viewer just how a work of cinema is operating on their senses and when people become aware of these things they have more control over what media can manipulate them and how. 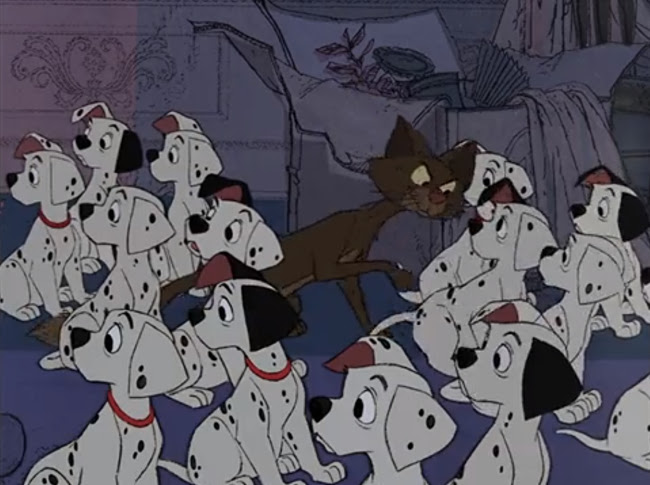 Animation is a medium that is certainly too often taken for granted, especially since most of us are first exposed to it as children. Most kids never imagine the years of slow, painstaking work that goes into a feature length animated film and many people carry this lack of awareness into adulthood. So leaving artifacts of the work process in the finished product creates a parallel story about artists carefully building something. Walt Disney, though, wasn't happy with how the film looked and expressed regrets, leading to a rift between him and the film's art director, Ken Anderson. It's not hard to imagine why he disliked it--as someone who fought against his striking workforce in the '40s under the belief that harder working, more talented individuals deserved greater privileges, certainly the idea of someone being rewarded for leaving a job unfinished would seem contemptible. But the current market seemed to be against him. Suddenly, sloppiness was profitable, or at least, that's how many people approvingly saw the state of things. 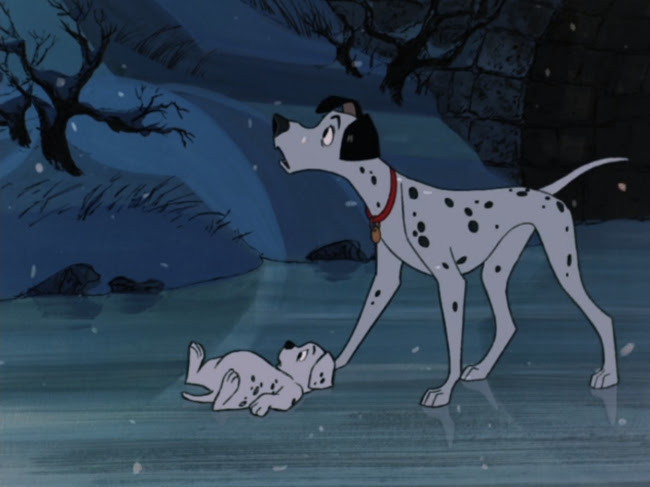 What it really is is an appeal to pity. Much as Foucault's influential writings at the time were convincing people to regard mental illness as a virtue; the appeal behind showing the rough edges is a bit like turning the adult artist into the child who takes their crude crayon drawing home to their mother to receive praise not for how impressive their work is but for how adorably flawed is the product of their great effort. When it's not actually your child, the pleasure tends to be temporary, especially since, after a while, all works in progress tend to be the same story--a work in progress. 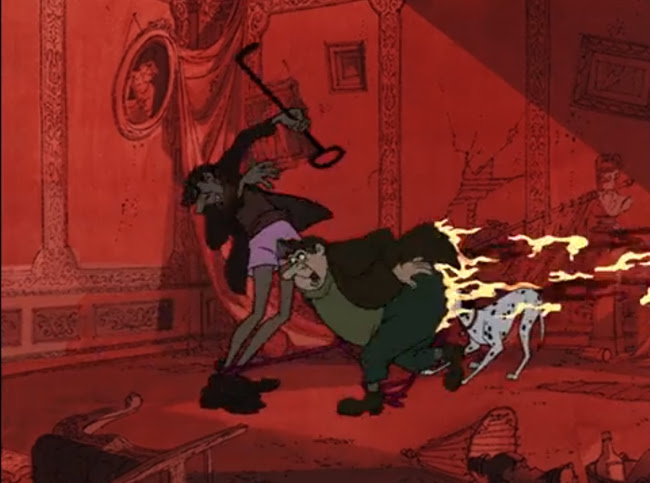 So the film works in spite of rather than because of its postmodernism. There is a charm in the animation, particularly in the puppies, and its ability to elicit character has nothing to do with the fact that it looks unfinished. There's a sweetness in the idea of the nationwide network of dogs ready to help Pongo and Perdita. For all its endearing qualities, though, it's no surprise that Sleeping Beauty has ultimately come to be regarded as the better film. And it's little wonder One Hundred and One Dalmatians is seen as the start of a Disney Dark Ages that would last until 1989 and the release of The Little Mermaid.

Posted by Setsuled at 4:39 AM
Email ThisBlogThis!Share to TwitterShare to FacebookShare to Pinterest