Not So Eternal Youth Versus the Enterprise 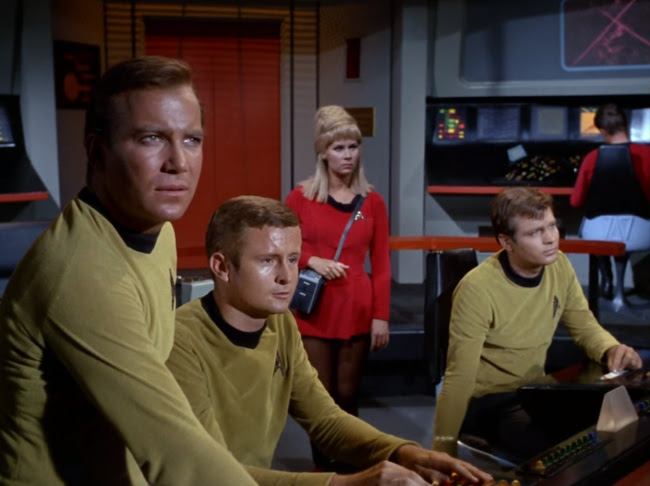 Whoever heard of a virus that kills the old but spares the young? Anyone who remembers "Miri", a first season episode of Star Trek, aired in October, 1966, in which the crew beam down to an Earth-like planet inhabited only by children. I've always liked how this episode condensed and recontextualised the psychological differences between young and old and the resulting conflicts between them. Now, of course, the story takes on some new resonance. 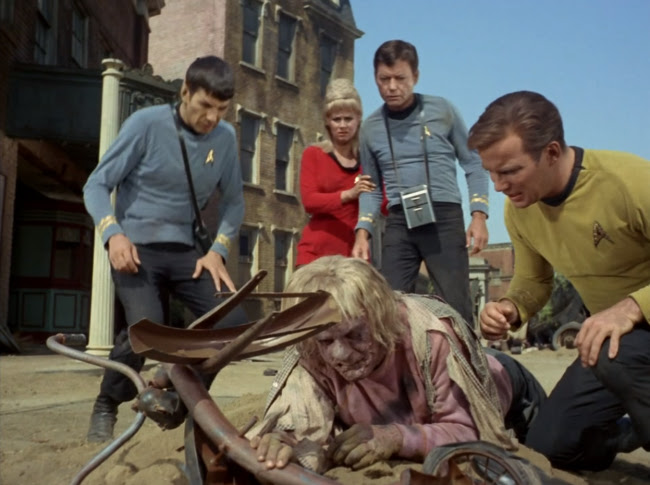 Finding a laboratory, Spock and McCoy uncover the history of the place and how, long ago, its inhabitants tried to genetically engineer a way to extend their lifespans. They succeeded in making something that causes the body to age much more slowly--about a month's worth of aging for every century--but once puberty is reached the pathogen reacts by tearing its host apart, physically and psychologically. 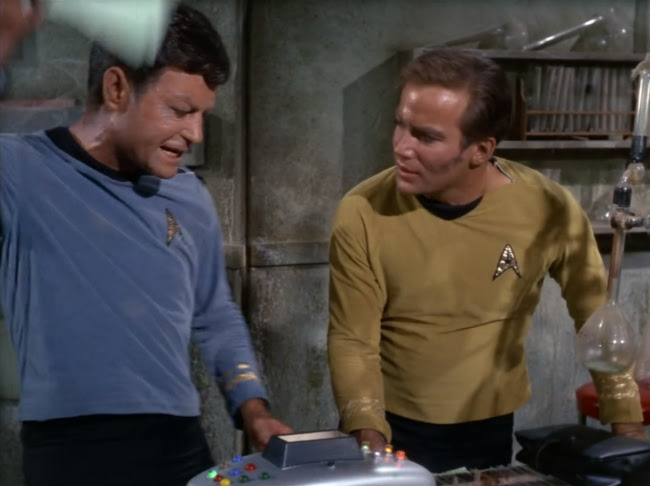 The mental deterioration starts to affect the Enterprise crew and they become increasingly irrational (except for Spock) even as they struggle to develop a vaccine. It also makes it difficult for them to work with the children who inhabit the ruined streets. 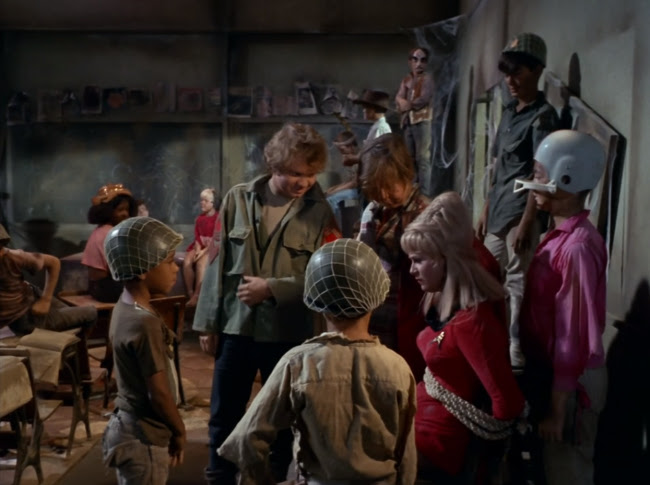 They look like kids but they're really hundreds of years old. But they also behave like children, turning life into an endless series of games and supporting their mutual belief that what's happening to the old can never affect them. In a way, they're like the Lost Boys in Peter Pan, but crueller and pettier. They haven't spent their time building anything beautiful or useful; they play hide-and-seek and "bang bang", wasting time away with idle pleasures. 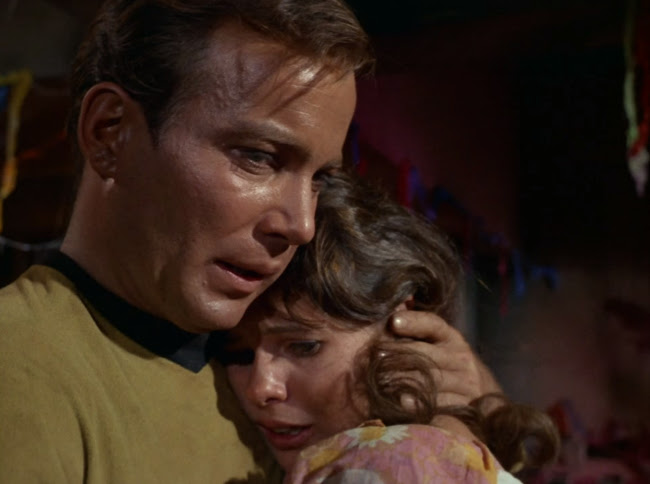 But inevitably they do grow up and are affected by the frailties and hazards of age as much as any adult. Miri (Kim Darby) is now a young woman and of course she starts to fall in love with Kirk. But when the disease starts to affect them, she has the horrifying realisation that he and the others are truly "grups", the kids' word for grown-ups. This word shows that, like racists, they're avoiding distressing sympathy by seeing the sufferers as an inferior species. So tightly do they cling to this that Kirk has trouble convincing Miri of the truth even though she's seen with her own eyes some of her playmates age and die. 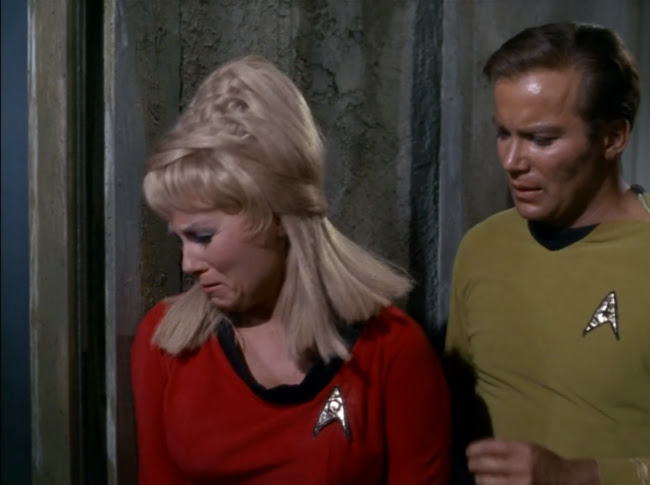 I like how gentle Kirk is with Miri, and with Rand, whose anxiety is to do with the loss of her beauty. As the disease disfigures her leg, the advantage of the short skirted uniform for the women of Starfleet becomes a curse. She says she always tried to get Kirk to notice her legs, now they draw notice for the wrong reason. It's an interesting moment that reveals how the uniform facilitates the dating culture in Starfleet and how cruelly the virus thus prematurely deprives someone of a sign of attractive, youthful vitality. 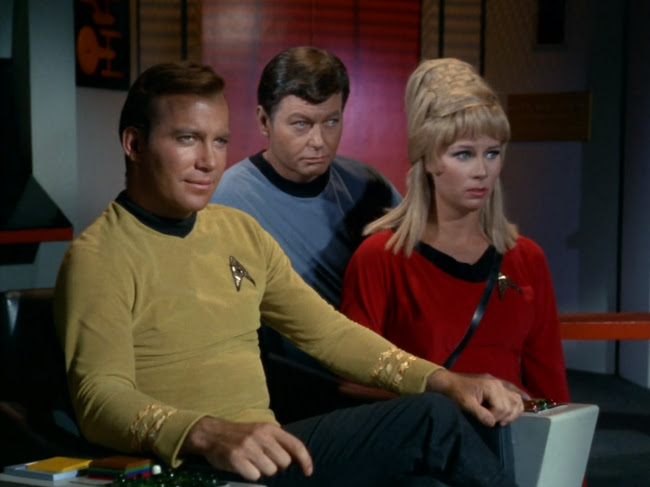 But of course, this isn't the end for the crew of the Enterprise who finally manage to convince the kids to help them. For this we have to credit Kirk's diplomacy and not his fists, despite what's been said of the relative strengths of Kirk and Picard. He goes among the children and reasons with them respectfully despite their childish insults. Obviously, that is the mature and only path to cooperation.

Observant air remains beyond the wall.
Selected hairs complete the thinning skull.
Reversing leaves includes a leafy fall.
A tapping told of cups beyond the hull.
The bigger shirt becomes the bigger man.
Alerted horses cook the special brew.
A bouncing cat redeems the static plan.
The richer green was closer yet to blue.
The absent voice acquires help in space.
With metal shoes, the egg ascends to law.
The good and true assort the station face.
The claws retire 'neath the fluffy paw.
The science built a smaller kind of kid.
The lines were spliced with timely aid of fid.

Posted by Setsuled at 2:59 AM
Email ThisBlogThis!Share to TwitterShare to FacebookShare to Pinterest