All Dressed Up and Nowhere to Go

Trying to find something in my purse to-day, I pulled out a bunch of the cards, flyers, and even whole short comics that increase in number every time I go to Comic-Con. It was kind of depressing--all the hard work I was looking at and knowing practically none of these people make any money. It's like ten thousand people trying to fit on a lifeboat. 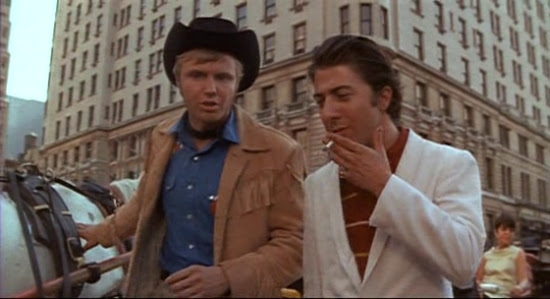 Two nights ago, I watched Midnight Cowboy, directed by John Schlesinger, who also directed Billy Liar, and Midnight Cowboy starts off with what might be seen as an alternate ending to Billy Liar, presenting the possible reality that may have occurred if Billy had gone off to London and left everything. Joe, Jon Voight's character, is another young man with big dreams who's been oppressed all his life by abusive relatives and neighbours in his small Texas town. One day, he decides to dress as a cowboy and go to New York to try to earn a living as a gigolo.

Joe's lack of success has a lot to do with his naiveté and simple, good old fashioned stupidity. Meeting with failure in trying to get female clients, Joe finally takes a guy into a movie theatre, only to find the guy unwilling to pay afterwards. Joe threatens to take the guy's watch, but lets him keep it once the guy's pleaded his mother would be upset. Joe not taking the guy's watch anyway goes a ways beyond naiveté or good nature. It's hard sometimes not to see his "innocence" as cartoonish at times. But this effect is counteracted quite a bit by the location shooting and general sense of realism in the photography.

Also helping the character of Joe work, while sort of diverting things from his story, is the character of "Ratso" Rizzo, played by a very amazing Dustin Hoffman. Hoffman conveys layers of thought and feeling in character few actors are capable of. The relationship between the two men diverts the movie from the unexciting dumb kid getting eaten up by the big city story and makes it something subtler and more primal, about two people just trying to survive. 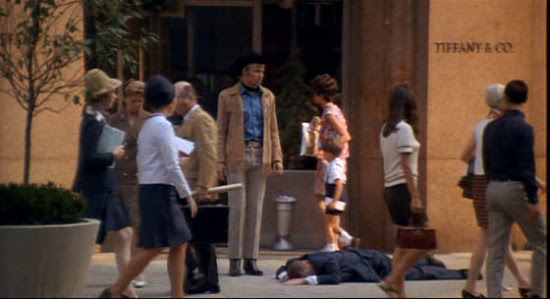 The movie takes kind of a cheap shot early on at Breakfast at Tiffany's having Joe come across an apparently dead or unconscious man in front of Tiffany and Co. as if to say, "See, Holly, bad things can happen at Tiffany's." It's not really an earned shot as Joe's a character not nearly as well drawn as Holly Golightly. Voight's performance carries a lot of it.

As with movies like Klute, this movie seems to be a reaction against the old Hollywood style film, incorporating New Wave techniques. But as is usually the case with such films, it's not in their reaction against the old style that makes them succeed but rather when the filmmakers just settle into telling an honest story.
Posted by Setsuled at 6:17 PM
Email ThisBlogThis!Share to TwitterShare to FacebookShare to Pinterest