Images of Death and Slavery

I've spent most of to-day so far, and a good part of yesterday, reading Incidents in the Life of a Slave Girl. This was assigned reading for my history class, something like seventy pages for class to-night. Such a large number of pages being assigned is largely due to the teacher continually pushing back due dates on other assignments because he perceived the class was too busy or lazy to read the ten or fifteen pages he normally assigned.

But I didn't mind spending so much time with the book. Published in 1861, it's the account of a former slave named Harriet Jacobs of her life in and escape from slavery. It's rather well put together, Jacobs having been more literate than most slaves were given opportunity to become. She talks about, at one point, being forced to spend seven years living in a cramped crawl space with only sewing and reading for diversion and I'm rather curious to know what books she read.

For class discussion on the book, I was paired with a young black woman named Queen who seems to be particularly interested in slavery in America and its relationship with her ancestors. She posed a question for the class, asking us if slavery would still have been wrong if the slaveholders had all been very kind to their slaves. I replied that it was kind of a Star Trek question, that that was the sort of thing that seemed to happen to the crew of the Enterprise a lot--some powerful alien force dressed in togas or frock coats promising to give the crew all they wanted for eternity if they'd only submit the totally, and Kirk would give a speech about how men needed to have the freedom to carve out their own destiny.

The Doctor probably would've been willing to have sword duel with bin Laden, though, as he did with the Master in "The King's Demons", the serial I finished watching last night. It was nice to see the Doctor in a medieval setting again, but otherwise the serial was mainly disappointing for the amount of rather dumb or senseless decisions made by the characters. Much better was "Enlightenment", the preceding serial, about a group of all powerful, immortal beings called Eternals enslaving human ship crews from various eras to man space ships that look like sailing vessels.

The most intriguing part was possibly the sort of romance between one of the Eternal officers and Tegan. Being able to read the minds of their human captives, Tegan's admirer comes to be sort of dependent on her thoughts, pleading with her not to shut her thoughts off to him. It made me wonder if writer Barbara Clegg was channelling feelings she had after breaking up with a needy boyfriend. The story goes into how marvellous the Eternals are, but also totally empty without the thoughts of mortals to fill them. 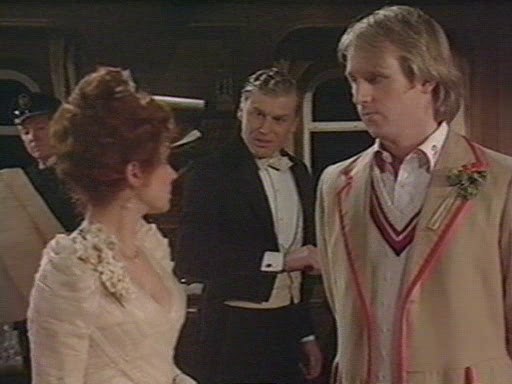