Music in the video is by Henry Mancini from the Charade soundtrack.

Currently drinking Starbuck's Orange Blossom tea, which is jasmine green tea with tangerine peel, goji berries, chamomile flowers, fennel seeds, liquorice root, orange essence, tarragon, and bergamot essence. It kind of tastes like Ecto-Cooler. I can't believe they finally discontinued Ecto-Cooler . . . in 2001. I guess I'm the last to know. It would've been great if it was still around to-day, with kids wondering who the fuck this Slimer character is.

Starbucks has finally stepped up their tea quality to match Coffee Bean and Tea Leaf, which for years was the only place I could go to get full leaf tea bags. American tea finally taking steps away from the slim packets of sand mocked by the rest of the tea drinking world. The Orange Blossom, for example, looks like this; 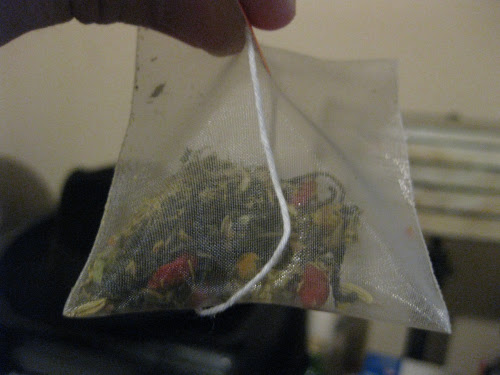 There's something exciting about tea being little bags of goodies. Though I'm sad to see Coffee Bean and Tea Leaf isn't doing good business nowadays--they've rather scaled back their menu, no longer even serving their hot apple juice with cinnamon and honey.

Feeling pretty foggy and unfocused the past couple days, somehow this made me decide to watch The Big Sleep last night, one of the most notoriously convoluted plots in movie history. Though one of the great things about that movie is that it's enjoyable regardless of whether or not you're actually following it. Sometimes when I watch it, I am keeping track of who killed Geiger, making sure to remember to pretend Carmen is naked when Marlowe finds her at Geiger's house, as she is in the book, so the blackmail scheme makes sense, remembering Mrs. Rutledge's relationship with Eddie Mars and the significance of the whole business with Regan, remembering the deal with the kid and Agnes. That poor kid. Other times, like last night, it's enough just watching Bogart going from hot dame to hot dame, smiling wearily.
Posted by Setsuled at 5:33 PM
Email ThisBlogThis!Share to TwitterShare to FacebookShare to Pinterest