Listening to The Big Lebowski soundtrack yesterday, I was surprised by how much wasn't included. Man, they took the Creedence!

Wikipedia has a list of songs left out of the official soundtrack release. I was surprised to find out that "Just Dropped In (To See What Condition My Condition Was In)" was Kenny Rogers. It's weird, because I kind of like the song. I'm used to seeing Rogers on billboards around town promoting a local casino.

I've never thought about how they got the camera between the girls' legs on the closeup of Jeff Bridges. I guess they're either fake feet or they have the girls standing to the side and we're actually seeing the opposite feet of what we think we're seeing.

So "The Caves of Androzani", voted the best Doctor Who story in one poll, and among fan favourites in any case, is followed by "The Twin Dilemma", which has many times apparently been voted the worst Doctor Who story. It's the first serial to feature the widely reviled sixth Doctor, played by Colin Baker, who I'd been actually kind of curious to see. Not just out of the kind of curiosity that compels one to watch a train wreck, but also because, I figured, I like a lot of things a lot of people hate. Maybe I'll like the sixth Doctor, maybe he's unpopular because they tried to do something interesting and ambitious with him.

I was half right. They were trying to do something interesting and ambitious, but I didn't end up liking it any more than anyone else. I guess it follows naturally from the sympathetic villains to the anti-hero Sharak Jek that we'd get an intentionally unlikeable Doctor. I have no problem with a main character who's unlikeable, but I don't like unlikeability for unlikeability's sake. There's no logic to the sixth Doctor's unlikeability--sometimes he kind of reminds me of the first Doctor's crotchetiness, but when he just abruptly says something rude to Peri or suddenly wants to run away from a plan he'd made himself, it feels artificial, like the writer's trying to meet a quota of unlikeable moments. It's certainly not helped by the fact that Colin Baker delivers a rather uninteresting performance. I enjoyed the first episodes of the other Doctors because they were always actors capable of creating characters who seemed to have a lot going on inside. You could sense the layers and you were compelled to study them to try and see if the familiar Doctor was in there. But Colin Baker is all surface. It's like when Bernard Herrmann got an opera singer to deliberately sing out of her range in Citizen Kane, only that time it was on purpose. Baker might be a decent supporting character in something, but he simply hasn't the depth of a lead, unless it's one of the Stanley Kubrick movies where he deliberately cast a lead with no depth. Though, maybe he's not great as a supporting character, either, since apparently he'd played one in a Peter Davison episode and I don't remember him being remotely remarkable.

So far the only positive I can see in the sixth Doctor is that Peri's less whiney around him--so she can be a foil for the whiney Doctor.

Meanwhile, everyone else is talking about how great the new Neil Gaiman episode is. Well, I guess I have something to look forward to in four or five months . . . 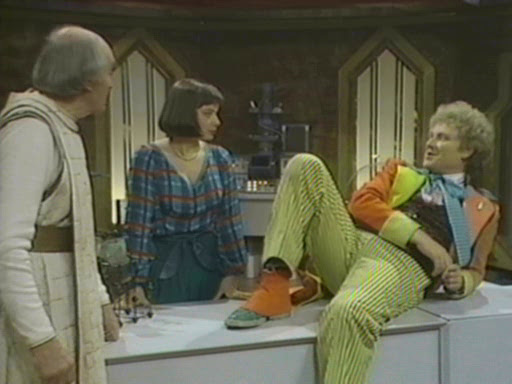