I wanted to sleep in until at least noon to-day but for some reason I got really sleepy at 2am and there was a lot of noise around here at 10am. So I had more than enough time to study for to-night's Anthropology final exam, which is at 8pm.

I just received an e-mail a few minutes ago from my anthropology teacher, sent out to the whole class, which reads, in part;

No explanation as to what the money's needed for is included.

Since last night, he's sent out two other e-mails telling the students to bring in all their assignments from the semester or the grades for these assignments will not be factored into the total grade. I guess I can infer from this that he does not keep records--the fact that we've only had two assignments outside of class makes this all the more fascinating. I'm really starting to wonder if I'm going to hear about the decaying corpse of my real anthropology teacher turning up somewhere, five months dead.

It's a good thing I'm such a pack rat and I have both my assignments in my backpack still. Though, as this is the first time he's mentioned the need for us to hold onto the assignments, I wouldn't be surprised if there are a few students who are quite justifiably angry to-day.

Having finished the second half of "Revelation of the Daleks" yesterday, I've completed the first full season of the Colin Baker era Doctor Who and with his final season having only fourteen, half hour episodes, I am seeing the light at the end of the tunnel at last.

I never did warm up to the sixth Doctor, but I will say season 22 wasn't a complete waste of time. There were only two serials that felt like genuine torture--"Vengeance on Varos" and "Timelash". "Vengeance on Varos" did feature Sheila Reid, Mrs. Tuttle (or was it Buttle? It's been confusion from the word go) from Brazil, though she's in a strikingly phoney role as a member of a television audience for the serial's Running Man style plot wherein the Doctor and criminals are forced to overcome deadly obstacles for the amusement of that audience. So, so bad, though not as bad as the phoney DJ in "Revelation of the Daleks", a serial I otherwise rather liked, particularly the horrific moment where a young woman comes across her father being turned into a Dalek and he begs her to kill him. 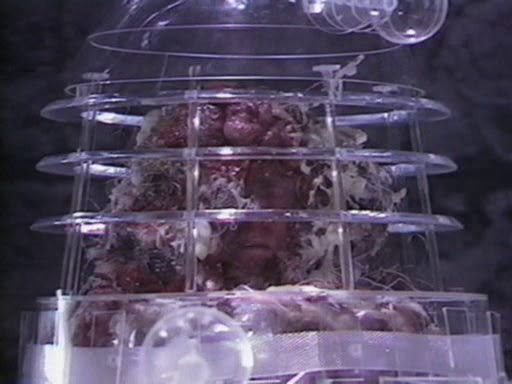 There were several very effective guest stars in the season--Eleanor Bron and Clive Swift in "Revelation of the Daleks" and I liked the new Time Lord (Time Lady?) villain known as "The Rani", despite the fact that her name is pronounced exactly like "Ronnie" as in Ronnie the Limo Driver.