Burn This Disco Out 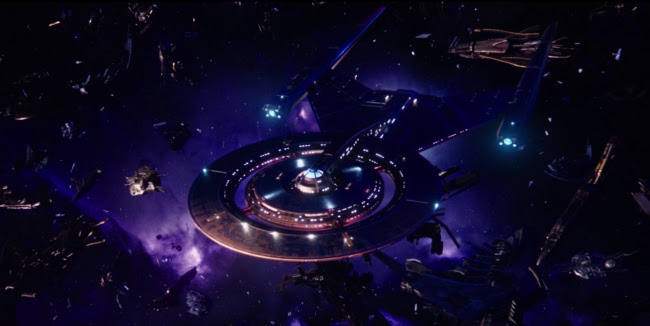 I somehow didn't realise until yesterday that a new Star Trek Discovery episode aired last Friday. That's life without commercials, I guess. I'm used to getting word via studios paying sites to talk about shows and somehow it seemed like there wasn't a lot of that in this case. Anyway, "Despite Yourself" was one of my favourite episodes so far. 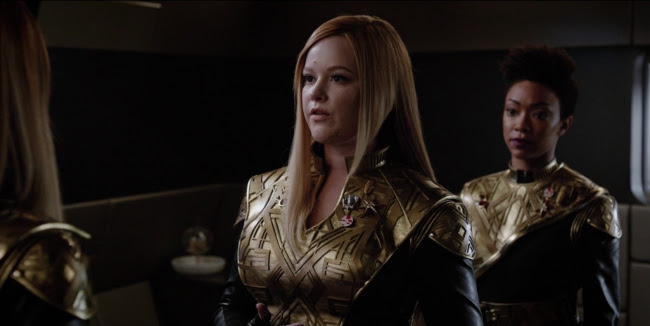 I say this should be Tilly's (Mary Wiseman) look from now on. It's a shame she doesn't have Uhura's crop top from the original series mirror universe episode but this is pretty good. Her heavily telegraphed education as a future captain looks like it's continuing by putting her in a situation where she learns to be more assertive. I think I finally understand why her character's so popular. I loved her awkward cursing in this episode. It's a little weird after her seemingly unintentionally awkward "fuck" a few episodes back. But I think it's pretty clear plans were getting changed a lot in the first half of the season. Weirdly, I can't find anything online about the writer for this episode, Sean Cochran. Maybe he's a pseudonym for Javid Iqbal?

Thankfully it seems like they're easing up on trying to pretend it's not obvious Tyler (Shazad Latif) is really Voq. The actor was clearly directed to act differently in his first episodes as Tyler before plans were changed to make him unaware that he's Voq--but this is much better. It fits in with the themes the show's actually starting to crystalise about heroes who are secretly villains and villains that are secretly heroes. It would be better if Burnham's (Sonequa Martin-Green) backstory about her being a villain made any sense at all but, oh, well, let's move forward.

Jonathan Frakes directed this episode, the first to direct both an episode of Discovery and its rival, The Orville, and he does a good job. Of course, he's best known for playing Riker on Star Trek: The Next Generation and some might remember Riker was intended to be a sort of Kirk character on that show, to be the muscle that went on away missions while Captain Picard remained on the ship. This was to respond to the criticism that it didn't make sense in the original series for the captain to go on every away mission. Picard ending up going on away missions a lot anyway--I'm reminded of this because Burnham being ostensibly the main character on Discovery seems increasingly true in name only.

Putting us in her point of view allows Lorca (Jason Isaacs) to be mysterious but he's too transparent. I didn't buy any of his attempts to conceal that it wasn't because Stamets (Anthony Rapp) was pushed too hard that they ended up in the mirror universe. Like most of the hidden things on the show, it's not hidden very well and makes Burnham in particular seem a bit thick as a consequence. But maybe plans will change again and a future episode will have a "we meant to do that" moment. 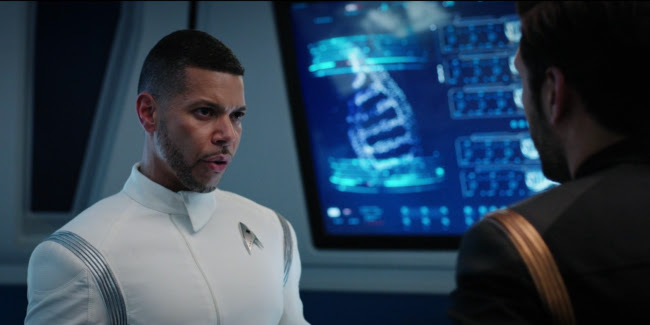 I was surprised how disappointed I was when Dr. Culber (Wilson Cruz) was killed. In this episode it seemed like he was finally getting to do something beyond being just Stamets' boyfriend and I was getting caught up in him trying to solve a medical mystery. I started thinking about just how far you'd have to go to turn a Klingon into a human convincingly enough to fool Federation medical scans. Culber talks about bone crushing and scarred internal organs--Voq's blood must've been completely replaced as well. The fact that it's possible at all I would think indicates humans and Klingons must be related on some level. In any case, it sounds like it might have been simpler to do a brain transplant. Then Voq and Tyler probably would've been played by different actors and the show might've had a better shot at keeping his identity secret.

After watching this episode I went back and watched "Mirror, Mirror" again, the original series mirror universe episode. It occured to me one of the reasons I'm looking forward to Quentin Tarantino making a Star Trek movie is I know he'll make it 60s as fuck. Maybe even more 60s than the actual 60s show. Cool uniforms, people who seem like they're having fun when they have sex, colourful lighting . . . I hope he goes back to a starship design closer to the original series, too.

Posted by Setsuled at 1:22 PM
Email ThisBlogThis!Share to TwitterShare to FacebookShare to Pinterest