But What Else Deserves Ado? 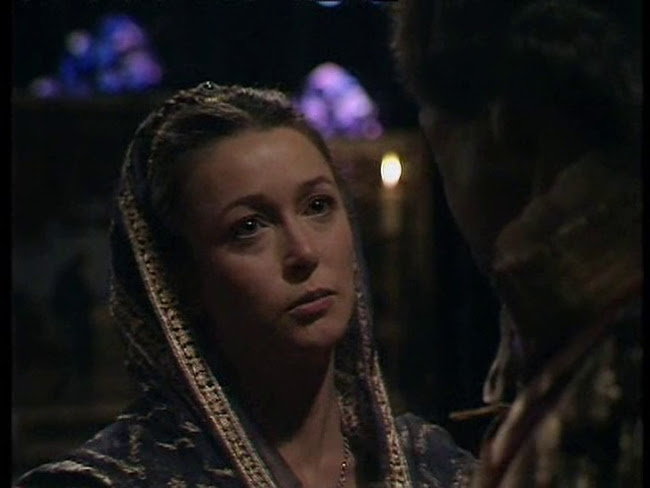 Why doesn't Cherie Lunghi get more roles? Well, looking at her Wikipedia page I see she's had quite a few but I've only seen or heard her in three leading roles--Excalibur, the Doctor Who audio play The Emerald Tiger, and this morning I saw her in the 1984 BBC production of Much Ado About Nothing in which she is my favourite Beatrice.

Much Ado About Nothing is one of Shakespeare's great comedies but like most great comedies it's perched precariously on the edge of being a tragedy. Just imagine a similar real world situation where influential people expend so much time and energy on trivial manipulations, false gossip, and rumour. It's easy to see how the consequences could be catastrophic. 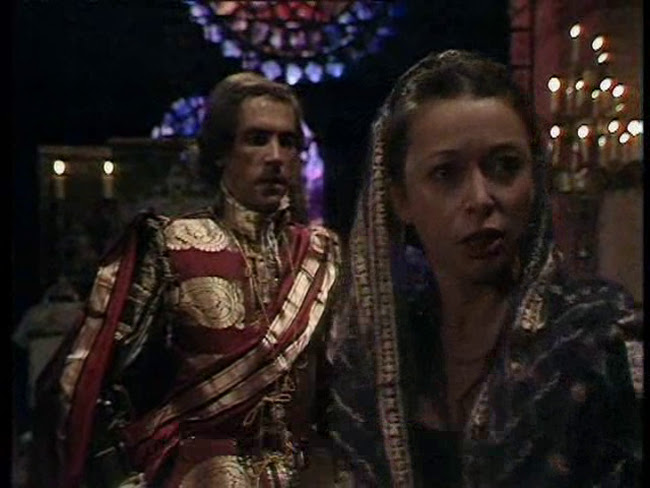 Beatrice's great "that I were a man" scene is delivered with such wonderful passion by Lunghi one cheers for her despite the fact that she's claiming that, were she a man, she'd kill Claudio--the character who must wed Hero if the play is to have a happy ending. 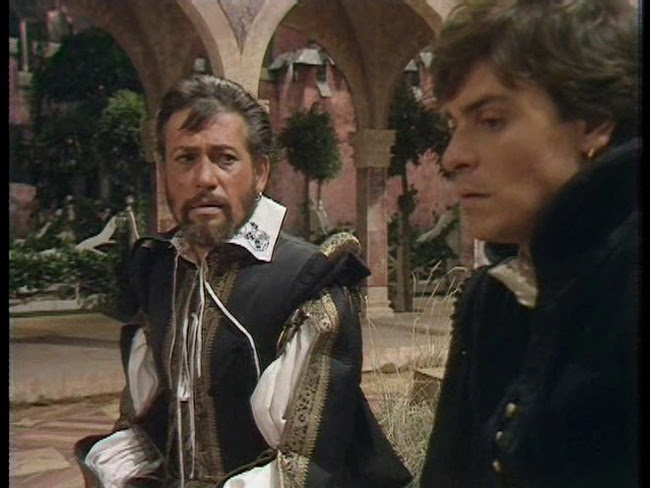 To be fair, Claudio did publicly accuse Hero of sexual impropriety. Claudio and Don Pedro truly believe they witnessed a prelude to Hero having sex with a man--not her fiance--before marriage. It's too bad for everyone that Claudio and Don Pedro didn't seek better evidence of the supposed crime before taking actions that might irrevocably damage Hero's reputation. 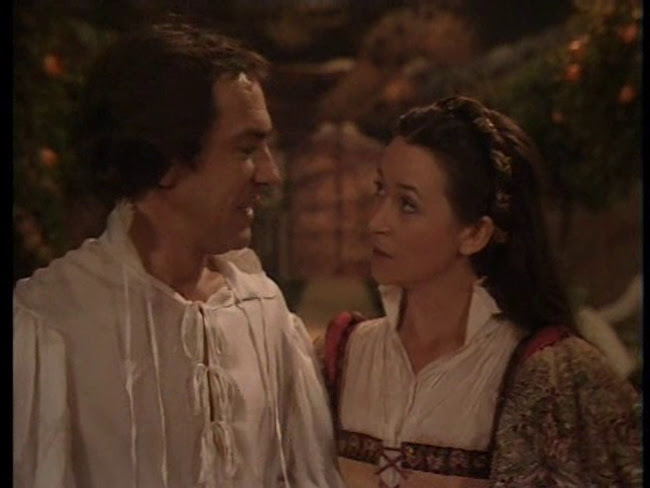 On the other hand, it's Claudio and Don Pedro's subtler manipulations that bring Benedick and Beatrice together. Robert Lindsay plays Benedick--he, like Lunghi, has one of those faces that seem to naturally convey a sense of sharp wit, helped by the quick, attentive facial expressions by the two of them. Their dialogue remains so crisp and wonderful, the classic pair too clever to realise the simplicity of their love for each other.

BENEDICK.
Thou hast frighted the word out of his right sense, so forcible is thy wit. But I must tell thee plainly, Claudio undergoes my challenge, and either I must shortly hear from him, or I will subscribe him a coward. And, I pray thee now, tell me, for which of my bad parts didst thou first fall in love with me?

BEATRICE.
For them all together; which maintained so politic a state of evil that they will not admit any good part to intermingle with them. But for which of my good parts did you first suffer love for me?

BENEDICK.
‘Suffer love,’ a good epithet! I do suffer love indeed, for I love thee against my will.

BEATRICE.
In spite of your heart, I think. Alas, poor heart! If you spite it for my sake, I will spite it for yours; for I will never love that which my friend hates.

BENEDICK.
Thou and I are too wise to woo peaceably. 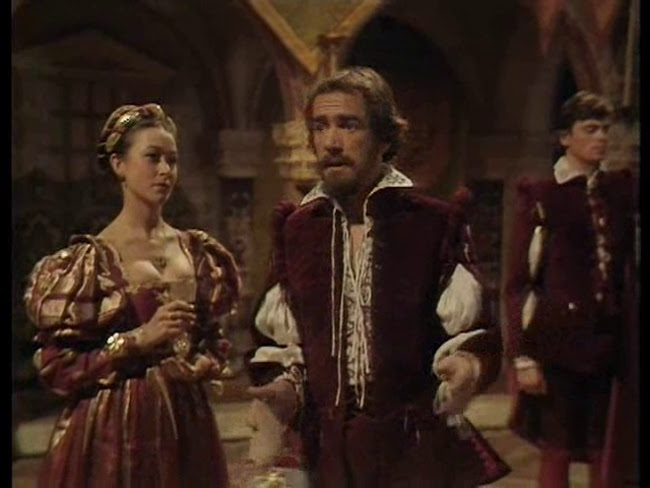 One could say much of the trouble in the play is due to words being frighted "out of their right sense." Meanwhile, the villainous Don John's plot to ruin Claudio and Hero's marriage through a campaign of misinformation is undone by the idiot constable Dogberry who constantly misuses words to great comedic effect. He's played in this production by Michael Elphick who delivers his pompous gibberish with the right conceited note of authority. 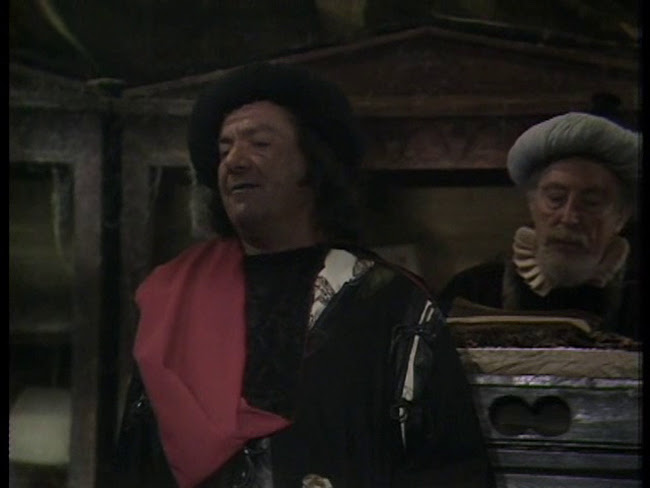 But he'll never understand the scope of what he was involved in. After one of the conspirators calls him an ass, Dogberry is so keen to have this insult recorded it's the first thing he remembers when the prisoners are being taken away.

Come, bring away the plaintiffs: by this time our sexton hath reformed Signior Leonato of the matter. And masters, do not forget to specify, when time and place shall serve, that I am an ass.

And so it is here too recorded.

Also in the cast is John Finch as Don Pedro. After seeing him as Macbeth and Henry IV it was weird seeing him in a comedy but he is pretty good.

It wore a coat derived of em'rald maps.
Entire forests knit to pass the time.
They sipped a flowing wine of amber saps.
The credulous and keen deserved the Rhine.
In sketches froze to glass instruction shone.
In paces past a drunken board they walk.
The rook espies in straightaway the zone.
As stringless shoes design the toes for chalk.
A sharpened iron looks a sleeve askew.
The shadow of a coat embraced the heart.
Experiment champagne retains its hue.
Now all the pearls are in the biggest cart.
A vest in bed appoints a duke to court.
The tinsel symbols reign a fluid sort.

Posted by Setsuled at 5:23 PM
Email ThisBlogThis!Share to TwitterShare to FacebookShare to Pinterest